Scare-A-Con is an up and coming 3 day movie/pop culture convention which is now in its second year of be held in the upstate NY area. Originally held in Syracuse, NY the event this year has moved to a larger venue which is part of the Turning Stone Casino in Verona, NY. The con hosted a who’s who list of film/music stars, displays and vendors that gave those in attendance plenty to keep busy with over the course of the three day event.

I attended day two of the 2013 Scare-A-Con event which after a soft opening on Friday was in full swing by the time I entered the main floor of the convention. After making my way through the admission line the first thing I noticed was the sprawling layout which allowed guests some costumed and some not room to mingle freely amongst the guests and vendors. For me this is something I always notice as it’s nice to have some room to breathe when taking things in. Everything from horror house exhibits to comics and several steam punk exhibits could be found while making your way to the various celebrity signing tables which were located throughout the venue. On hand were legendary television actors like Felix Silla and Butch Patrick to more recent actors like Scout Taylor Compton and Naomi Grossman. The longest lines of the day belong to former Kiss guitarist Ace Frehley and the lovely Linda Blair who is still capable of turning heads other than just her own. Other notable celebs in attendance who also garnered quite a bit of attention throughout the day were Tony Todd, Ernie Hudson and Sean Whalen of “People Under the Stairs” fame.

Though some of the prices being charged by celebrities in attendance were a bit high and several celebs listed were MIA I still had a good time taking in all Scar-A-Con had to offer. A lot of times with the newer conventions you see celebrity no shows or prices being a bit higher than some of the larger conventions however that’s just the way things are. All in all Scare-A-Con was a fan/family friendly event that had a little something for everyone. My only hope is that they continue to grow and expand on all of the good things the event has going for it.

For more information on Scare-A-Con you can visit the official website at www.scareacon.com 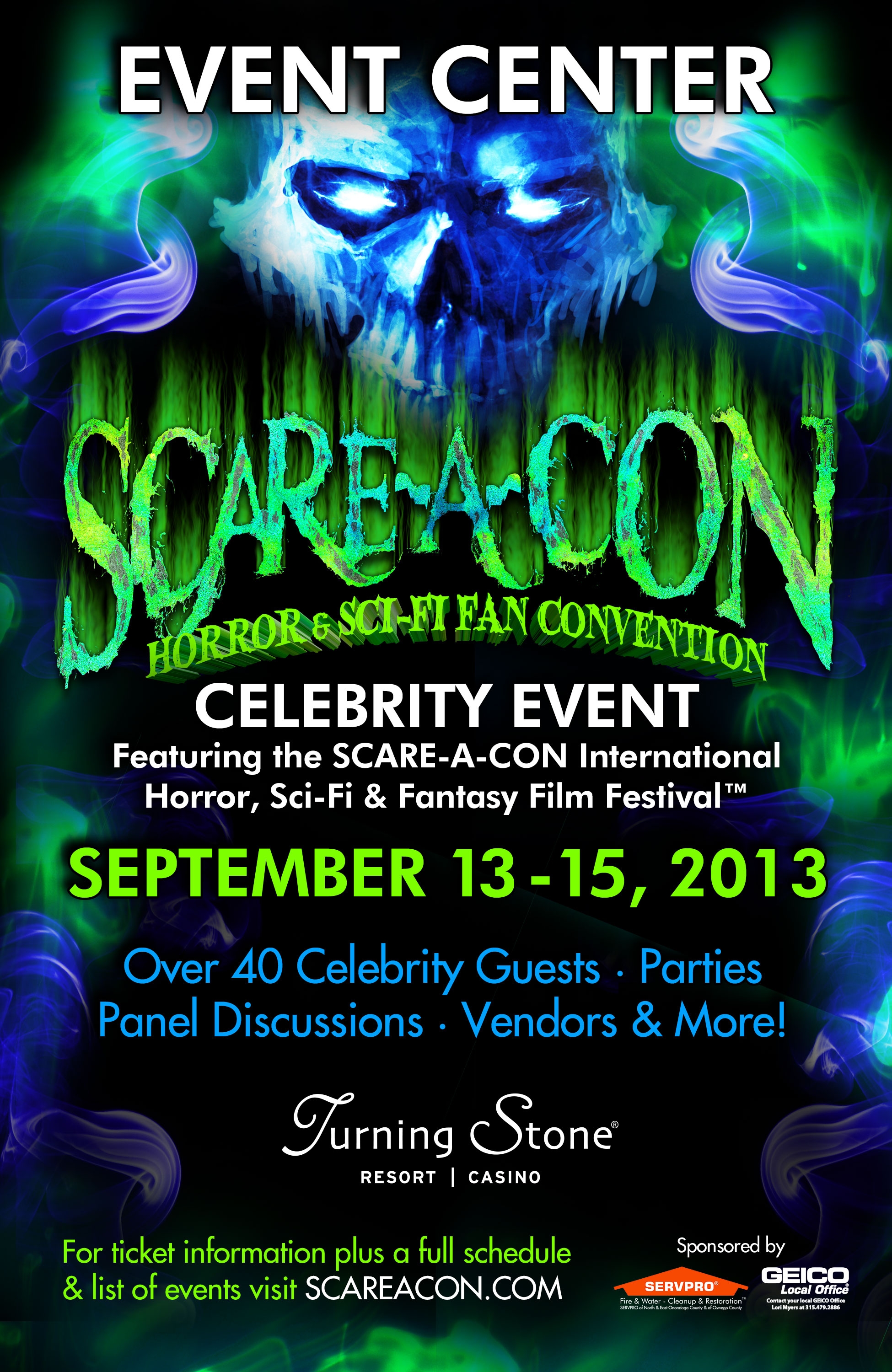 Beware, horror fans: Famous names and faces from “The Exorcist,” “The Addams Family,” “Child’s Play” and “The Walking Dead” are coming to Central New York this fall.

The lineup also boasts small screen icons like Butch Patrick, who played Eddie Munster on “The Munsters,” Lisa Loring and Felix Silla, the original Wednesday and Cousin Itt on “The Addams Family,” and Priscilla Barnes, the controversial replacement for Suzanne Somers on “Three’s Company” in the ’80s. Younger TV fans will also recognize Kylie Szamanski, who played the Governor’s zombie daughter Penny on “The Walking Dead.”

The 2013 convention also is launching the first-ever R.I.P. Awards for “Recognition of Inspired Performance,” and the creation of a Scare-A-Con Horror Hall of Fame. Fans will vote on annual nominees and awards will be presented during the event.
For tickets and more information, visit www.scareacon.com.