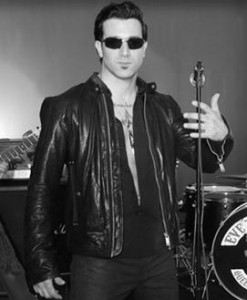 Taki Sassaris is the lead singer for the rock group Eve to Adam. The New York based group released the album “Banquet for a Starving Dog” in September of 2011. Media Mikes had a chance to talk with Taki about the album and what it’s like playing in a band with a family member.

Adam Lawton: Can you tell us about the bands most recent album?
Taki Sassaris: This album I think is our most mature as a group. The songs were written about experiences we all have endured as a band. I think there is a lot of reflection in the songs that are put on display. This album is a testament to the fact that we are one of the very few bands that are making our way through the modern rock world that have been together over a decade. We are very proud of this album.

AL: What is the band’s writing process like?
TS: The process it’s self varies. It often will depend on who brings in what idea and where everyone is at during that time. Some songs come from the jam process and are shaped over time by everyone in the group. Other times I will start a song on my own and then bring it to the group to finish. Every song has its own identity depending on how it came about. A lot of the harder more up tempo songs come out of the rehearsal situation. I personally find that setting to be the most fun to create in. I am really able to realize the song in the moment while trying to decode what the message and the emotional content is. As a writer I find this to be the most adventurous and exciting. I think a bands best worth is when they are working together as a band to come up with the best material possible.

AL: Were there any different approaches taken in the studio for this album?
TS: During the actual recording process we concentrated more on getting full live takes. We wanted the takes to have the band playing together for a majority of the album. There were a couple tracks on the album that were recorded in just one take. One thing that has evaded us in previous recording efforts was capturing that live feel from the shows. We consciously made an effort to capture a live flow with this album. I think we did that and it is a more accurate representation of the band.

AL: Does being in a band with your brother ever makes things difficult?
TS: It’s a complete blessing probably 97% of the time. The 3% percent where things go array get pretty hairy. He and I know how to push each other’s buttons very well. We are either one another’s protector or destroyer. When him and I argue or fight it can get ugly quick. We try to step away from that but you never know when you wake up if that’s going to be one of the things you are going to have to work through. We have a very strong working relationship and we balance each other. We don’t have too many black eyes or scars to show for it.

AL: What can you tell us about the bands current tour with Creed?
TS: We are both represented by the Agency group. We have been out supporting the new album since July with various groups. We had a really good run opening for Hinder that got us put up for the Creed tour. We were lucky enough to get it and it’s been an honor. This tour is the largest situation we have ever been involved in. The level of show production and crowd volume has been amazing. Creed is a band that defined our genre for more than a decade. It’s been a great challenge to us getting to warm that crowd up every night and showing people that Eve to Adam deserves to be in the conversation. The run is very intense but its fun.

AL: What is next for the band?
TS: We will be touring all through the summer and have been booked for quite a few festivals. Some things haven’t been announced yet as it is still a little too early. Our label and management have estimated to us that the band will finish 2012 out on the road. Hopefully after that we will get right back in the studio and make another album. We have a lot of ideas that we are dying to work on. We are very busy and very happy.