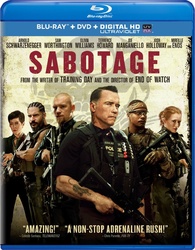 Arnold Schwarzenegger hasn’t really been up to his prime recently with his latest films outside of “The Expendable” franchise. They have been decent (except “The Last Stand”) but not big draws at the box office. “Sabotage” is no different in that department but it is quite a wild ride. It is low-key yet very gritty, gory, in-your-face and actually quite awesome. It is from the director of “End of Watch” and the writer of “Training Day”. and it really has that same kind of feel as those films, which is a great thing. This is definitely not your typical Schwarzenegger films and that is also a good thing. Action fans, should check this out!

Official Premise: When DEA task force leader Breacher Wharton (Schwarzenegger) storms a heavily armed cartel safe house, rogue members of his team use it as a cover to steal $10 million in cash. But just when they think their secret is safe, agents begin to be killed off one-by-one and everyone becomes a suspect, including the squad itself.

Besides Schwarzenegger, “Sabotage” packs a solid cast including Sam Worthington, Olivia Williams, Terrence Howard, Joe Manganiello, Josh Holloway and Mireille Enos. Great talent here and the ensemble really works well together. I think this film should have received much more attention. People just see it is “another Schwarzenegger comeback” and look the other way. I think we are going to see some great things from director David Ayer. If you haven’t seen “End of Watch”, I also highly recommend that…stunning film.

Universal delivered “Sabotage” as a combo pack including a Blu-ray + DVD + Digital HD copy. Universal also delivered again with a fantastic Blu-ray presentation. The 1080p is fantastic, like I said gritty and dark but with a really nice polish on it. Same goes for the DTS-HD Master Audio 5.1 surround track, which works well with the film’s action. Now we get to the special features, which are a big let down for me. There is a short behind-the-scenes look with “Making of Sabotage” and few alternate endings and deleted scenes included.

First thing I did when I got home from this movie was Google Arnold Schwarzenegger’s age. At this point in life I’m just hoping to look half as fit as he does at 66. In fact I should pray I live that long. The reason that bit of insignificant trivia was at the forefront of my mind is because he can still be a believable action star. After watching ‘Sabotage’, I believe that Schwarzenegger can pull off the lead in as many violent movies he wants to for the next decade. It’s too bad this potential return to form was sabotaged by an obnoxious cast of characters.

Breacher (Schwarzenegger) leads an underground group of mercenary-style DEA agents in a Cartel bust that goes bad when $10 million goes missing by the end of the mission. As much as it would help to visualize my complaints, I don’t feel like rattling off the seven crass biped creatures that make up his squad. They each carry around their own undesirable traits and probably still laugh at their own flatulence in the bathtub. After it becomes apparent that someone in this team has taken the money, the government takes it upon themselves to begin months of questioning and stalking that turns up nothing. But once the government gives up it’s investigation, things become complicated when it appears that the Cartel is now killing them one-by-one. Instead of the federal government becoming interested in an international criminal organization killing DEA agents, an Atlanta detective, Caroline (Williams) picks up an invested interest in the matter.

If it wasn’t for Schwarzenegger and Williams, I would have disliked everything. Despite tallying the highest kill count, Breacher feels like the most sane of the bunch. He seems to be the only one of the group that doesn’t abuse drugs, have a bipolar disorder and is able to carry a civil conversation that doesn’t involve constantly referring to the inquisitive Caroline as a stripper. His ensemble of commando DEA agents come off as a band of vulgar misfits that would much rather get in a fight in the strip club than worry too much about who’s picking them off systematically. I was hoping that the mystery murderers would at least speed up the process.

‘Sabotage’ is mild on the action, but shockingly heavy on the gore. I would have enjoyed more shootouts over people being disgustingly nailed to ceilings and bloated corpses wrapped in chicken wire. This movie goes with a mystery/thriller angle, but falls short of materializing any suspense or intrigue. I’m suppose to be on the edge of my seat with bated breath, but the juggling act of drama, suspense and action has them dropping the ball on multiple occasions instead of performing a trifecta in the genre department.

Despite the ineffective writing I did find myself entertained, but only when Schwarzenegger was realizing not everything has to be delivered in a stone cold tone and when detective Caroline entered a scene equipped with comebacks and pleasantries. I have to touch on these two again because they had a surprising chemistry. Even when the script finally calls for them to “do the deed,” it doesn’t feel forced, but more like a natural comedic break that allows for plot to move forward. Let’s just hope someone realizes Schwarzenegger’s talents are alive and well and shouldn’t be wasted as the sands of time slowly tick away.