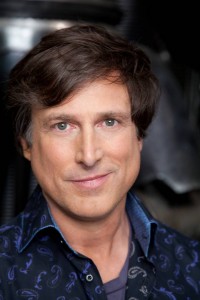 John Rosengrant is co-owner of Legacy Effects (formerly known as Stan Winston Studios). He had worked with Stan Winston since 1983. He recently created the animatronics robots in the film “Real Steel”. In 2012, Legacy Effects has a bunch of major films in the works including, “The Hunger Games”, “The Amazing Spider-Man”, “Total Recall” and “The Avengers”. Media Mikes had a chance to ask John some questions about his work on the film “Real Steel”.

Mike Gencarelli: How did you end up working into the movies and in your particular field?
John Rosengrant: Ever since I was five years old, I wanted to make monsters. I was an art major in college but I really wanted to do this type of special effects. I moved out to California to pursue that dream and Stan Winston hired me on the first Terminator and gave me that opportunity. I worked for Stan for 25 years until his untimely passing. With my three other partners that ran Stan’s shop, we formed Legacy Effects in his honor and to carry on his legacy.

MG: What are the challenges of mixing CGI and animatronics?
JR: I think the challenges are you want to make it seamless. Shawn Levy, the Producers, and the team over at Digital Domain lead by Erik Nash, we all went into this with a team mentality that we are going to help each other and really make it believable, even in shots where it wasn’t going to be practical and was going to be CG. The practical robot gave it great lighting and size reference. In the shots that it was practical, it also helped the performance all around by giving the actors something to react to.

MG: How long does it take to make and prepare animatronics as the ones you see in this movie?
JR: The process took five months. Six weeks of it was designing and sculpting the robots digitally and breaking down all the pieces to be rapid prototypes. Each hero robot consisted of about 300 parts. The remaining time was the actual building of the robots.

MG: Was there any technology you had to force into existence to make the movements work?
JR: As far as new technology, we used what is called our stealth control system. We developed a special hydraulic pump that was very portable and light weight and, coupled with an intuitive control system, enabled us to set the robots up for shooting in about ten minutes.

MG: How different is to work with animatronics than to work with actors?
JR: The challenge with animatronics is to get a believable performance from something that is a machine. And our background, besides being artists and engineers, is that we’re puppeteers and performers too. So we sort of channel that energy to bring the characters to life.

MG: Which was the most complex sequence you had to face while making the movie?
JR: As with many special effects movies there are many. But one that jumps to mind is when they first power-up Atom when he is pulled from the junk yard. We had to cover the hero robot in mud, and make him sit up. There wasn’t as much prep time as one would like to have had but I think the scene turned out terrific. And I’m very proud of it.

MG: Can you explain your job as an Animatronic Supervisor?
JR: It’s building of the animatronic robots by sculpting, molding, engineering, selecting paint finishes, developing control systems and managing the overall performance of them on set.

MG: What are the robots made of?
JR: The panels and shells are made of fiberglass and custom blend of urethane. The mechanical structure inside is a combination of steel and aluminum and there are several of the robots that are machined aluminum parts. The Heroes are a combination of hydraulically powered and rod puppeted.

MG: Which robot was your favorite?
JR: They are all your babies. You put just as much time and energy into all of them. But I think Atom in this case displayed a lot of heart and soul for a robot. So I guess I lean towards Atom.

MG: What was the most challenging character to make?
JR: It was Atom. There are a lot more parts to him than others and more complicated scenes to do with him.

MG: How many people are involved in Atom`s creation?
JR: There was a couple from my team that were really imperative to brining Atom to life. Jason Matthews was the key artist in charge of Atom. Ian Joyner was the key digital sculptor that translated Tom Meyer’s production design artwork into 3D. Of course, there was a team here at Legacy of engineers, mechanics and model makers led by Dave Merritt. Mold makers, artists and painters were also involved in the total execution of Atom.

MG: In your opinion, what did Stan Winston bring to the business and the art of cinema? What is the essence of his… legacy?
JR: The essence of Stan’s legacy is that he taught me what our job is to create characters. It’s not so much special effects but more so to create a memorable character. Stan was a makeup artist and a fine artist but he originally came to Hollywood to get into acting so I think he really stressed the performance aspect. Whether it was the queen alien or the Terminator, or the dinosaurs in Jurassic Park, they always had an attitude and always seemed to be alive.

MG: In what way did your work change since “The Terminator”?
JR: On this movie, we built real robots and on the first Terminator we were pretending to build real robots. Also, the state of the art technology that has allowed us to sculpt robots and their parts digitally and rapid prototype them into the real world has allowed us to do things that were never possible back then

MG: For a person who dreams of wanting to get into your line of work, what advice would you give them?
JR: You have to be artistically rounded. Nowadays that includes knowing digital art programs as well as practical, and art techniques. If you’re coming at this more so from a mechanical side, you need machining skills, welding, and a sense of robots and computer control systems.

MG: What do you think is the future of animation and animatronics?
JR: It has a place because we figured out on “Real Steel” that it provides a fantastic reference for the CG robots and gave the actors something to really play off of and react to. Good acting comes from reacting. By having something real there, the actors can connect to something.

MG: On the Blu-ray, in the feature “Building the Bots,” director Shawn Levy talks about how Steven Spielberg emphasized that the use of practical effects was important to the film’s success. Do you feel as if filmmakers with that sort of insight into practical effects are a dying breed? Also, has Legacy Effects been approached to go back to robots for Spielberg’s upcoming “Robopocalypse”?
JR: Animatronic effects still have a very important place in this type of filmmaking. Some of the young filmmakers don’t have any experience with practical side of visual effects, but once they see what it can bring to their film, I think they embrace it. Spielberg’s “Roboapocalypse”, would be an amazing project to be part of.

MG: What’s a specific example of something you do that’s actually much harder than most people realize?
JR: In this movie we created 27, 8 foot tall robots. Some hero, stunt and background. But there were literally thousands of parts that had to all fit together and look like real metal and had to perform like a real robot. Noisyboy for example, had nearly 2,000 LED lights alone that were programmed with random sayings in Japanese which appeared on his forearm. That’s an example of one small complicated thing that may go unnoticed when you watch the film.

MG: John, any final thoughts on “Real Steel” before we close?
JR: It was a real pleasure to work on this film as it felt like a harmonious team effort from the start. Everybody understood their role, and everyone that is part of the film was treated with great importance. Shawn Levy, the Director, had a great energy that he brought to the film. The producers were very effects savvy. I’ve had a great history working with Producer Josh McLaglen who has worked on epic effects films from Titanic to Avatar and effects producer, Ron Ames was integral in bringing us together and organizing all of the visual effects on the film. My colleagues that I’ve been nominated with were outstanding in their contributions. My team here at Legacy worked tirelessly in creating the robots. I’d like to give a special nod to my right-hand man Jason Matthews who became Atom. Last but not least, thanks to my great mentor, Stan Winston, who gave me a great opportunity in this business.