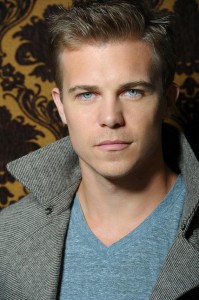 Michael Roark’s latest film “Magic Mike” was recently released on Blu-ray/DVD. Michael also has guest starring appearing on NBC’s new show “Reovolution. Media Mikes had the chance to talk with him about his role in the film as well as some of his other upcoming projects.

Adam Lawton: How did you become attached to the role of Ryan in “Magic Mike”?
Michael Roark: At the time I was living between Florida and Los Angeles. The film was shot in Florida and my South Beach reps. were able to get me a few reads with the casting people. We kind of went back and forth because I don’t think I was really what they were looking for but, I ended up getting a call out of the blue offering me the part. It was great getting to work with such an amazing cast. It was a little surreal when I sat down and looked at who was working on the film.

AL: Did you have any reservations about the role knowing what the film was about?
MR: I had zero reservations about working on the film. My characters focus was more of a love interest than one of the dancers. Essentially this film is a comedy. There are some dramatic sequences in it and there were some things that I think Steven Soderbergh wanted to push but it’s not a very racy film. Some people may have been disappointed by that but I think it made for a more interesting flick.

AL: What was it like working with such a great cast?
MR: Channing Tatum is very natural and a generous guy. It is really clear why people love to work with him and why he works so much. Olivia Munn is hilarious! I had a great time working with her as she is just a riot. It was an all around great set. I wasn’t there as long as some of the others but the time I had there was fantastic.

AL: What can you tell us about working on the new series “Revolution”?
MR: My episode of “Revolution” aired on Oct. 29th. That show has really started to pick up steam and people are connecting with it. Steve Boyum directed this particular episode and as far as my character Sean goes he is a very edgy type of guy. He’s the type of guy that you don’t really know if he can be trusted or not. It was a fun role to play not only because it was well written but I had nice little fight scene.

AL: Is Sean a character we will be seeing more of in later episodes?
MR: I think the potential to see Sean down the line is definitely there. I am always the last one to know sowe will have to wait and see. The story line was left open so there is a good possibility he could return. I hope he does. Working on the show was really fun.

AL: Can you give us an update on the new Showtime series “Banshee”?
MR: “Banshee” is probably one of the coolest projects I have worked on to date. There are just no rules with what they are doing on that show. There have been some trailers released but they haven’t revealed too much just yet. I can tell you that the episode I am in was shot in a maximum security prison. The things that happen in this episode are very intense. I can picture this show being a hit as there are a lot of great people involved.

AL: Do you have any other projects coming out that you can tell us about?
MR: “Rizzoli and Isles” is returning in late October and I will be guest starting in the season 3 finale of that on TNT. “The Following” will be coming out soon which that show has Kevin Bacon in it so you can’t ask for much better than that. “L.A. Dirt” is a feature film I did which has some really great original music in it by Travis Tritt and Tracy Lawrence. This has been a great year and a lot of cool things have come my way.