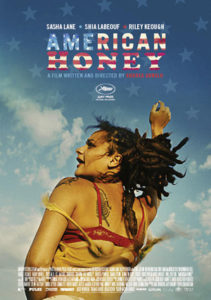 The thought of a nearly three hour movie starring Shia LaBeouf is likely to scare a lot of people off from watching “American Honey” and I’m not going to sway you back. “American Honey” is a road trip movie without an end or direction, but during its entire runtime, it feels like it should. It’s a unique movie with an honest portrayal of Middle America, but also a frustrating long movie without a rebuke for some of its more sour themes.

Having been filmed in parts of the Kansas City metropolitan area, I admit I felt a unique connection to the movie, seeing all the familiar sights. That familiarity helped me attach characters to people that populated my own Kansas City high school and neighborhood. But the movie doesn’t begin in my hometown; it begins in lower class suburban Florida with Star (Lane). When we meet her, she’s scouring dumpsters for tossed out food that’s still in the bag. It’s so she can feed her younger brother and sister because no one else will. Her father seems more focused on drinking beer and groping Star to slow-dance music, while her mom, having moved on with her life, seems more obsessed about line dancing at a country bar.

So it makes sense that Star is lured away by Jake (LaBeouf) and a crew of ruffians that sing along to gangster rap and Rihanna’s #1 hits. Jake’s innocent flirting and the promise of a life without restraint convinces Star to abandon her siblings, leaving them in her divorced parents “care”. This new life though, with Jake and the others, is actually a “magazine crew” (those annoying kids who find a different lie every time to sell overpriced magazine subscriptions) that goes from town to town across the country. Leading these youthful Nomads is a druggie vagabond that’s never sober.

The journey takes the “magazine crew” from Kansas City to Oklahoma to Grand Island, Nebraska and to Williston, North Dakota. Each city offers an interesting slice of Americana, from the rich people that dot the Midwest farmland to the blue class workers stuck in underpaying jobs. “American Honey” seems to offer more spice and intrigue with the people that Star encounters, which is unfortunate considering how interesting Star’s character is.

She’s good-hearted and naturally trusts the strangers she encounters, even hopping in a vehicle with three adult men in Nebraska who take her back to their place for expensive tequila and steaks. She loves Jake even though he’s clearly a loser with deep emotional issues. She befriends everyone in the “magazine crew” and appears to enjoy the work even though the “job” is exploiting her. She finds different ways to cheer up people around her or help those that she doesn’t know. Yet we never get a distinct feeling about how the sights and interactions are impacting her psyche or if she’s intelligent enough to understand the deteriorating situations around her.

Her aimless path possibly signifies the wanderlust that has infected much of America’s youth today. It never vilifies or champions the magazine crew beyond portraying them as the fun-loving potheads that they are. None of them seem like bad individuals or rotten apples, just young adults without ambition outside of money, getting inebriated and fornication. “American Honey” may simply be stating that youthful lethargy is a consistent no matter the generation. But there’s no denying that during the course of the movie, the pop-culture they consume is feeding into their apathy and idleness.

“American Honey” never blames Star and the others for what the audience may be faulting them with, but it never really points any blame at anyone. Without ever coming to a conclusion, it’s very frustrating that the movie never points a finger of blame or indirectly implies that the actions of someone, something, or society has led Star to this fun, yet troubling point in life. “American Honey” may simply be asserting that bad things happen and may always happen to a certain demographic of this country and that their joy is just as fleeting as their youth.

“American Honey” will certainly have meaning to various people and that might actually be one of its strongest points. It paints such a vivid and beautiful picture of youth in the U.S., that it could say a lot of honest things to a lot of different people. It’s a movie that grew on me, much like a melancholy memory from my youth. I may not have enjoyed the experience, but looking back on it I slowly begin to understand its importance and significance. But I go back to the first sentence of this review and say, do you really want to watch a directionless movie that pushes towards three hours with Shia LaBeouf? If you want an idiosyncratic art film, this is it. But you also run the risk of finding yourself bored and exasperated.