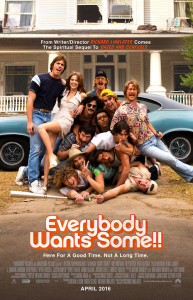 Described by its writer/director, Richard Linklater, as a “spiritual sequel” to his popular 1970’s set film Dazed and Confused, Everybody Wants Some!! follows the fun times being had by a small college baseball team in 1980. To promote the film, co-stars J. Quinton Johnson, Glen Powell and Wyatt Russell sat down with me at the Alamo Drafthouse Theatre in Kansas City. Johnson enters the room in full voice, performing a song he literally just wrote. Powell, the most outgoing of the group, sits between the other two, eager to chat. Russell, a former hockey player and the son of Kurt Russell and Goldie Hawn (he has his dad’s eyes) busies himself with his phone. And so we begin:

Glen Powell: It was a transitional time and everything. Clothing. Presidents. Everything was kind of shifting and changing. Our relationship with the world was changing and I think this movies about guys who were shifting from either college to the real world or high school to college. And that shift not only in their world but in the world at large is what the film is about.

Wyatt Russell: So it’s AWESOME! [everyone laughs]. I mean we talked about the clothes and the hair and the music. I think everything was much sexier then I just love that era.

GP: Nowadays we have social media…smart phones… so when you go to parties today everyone has their phone out to show how good time they’re having. But in that era it’s like having a good time with these people right here.

WR: I’m at the Bieber concert!

[Note: Justin Bieber was in Kansas City the same week as the guys]

GP: And when we’re having a good time, we’re also athletes on the dance floor. Rick [director Richard Linklater] told us that back then athletes were peacockers, in every sense of the word. When I was an athlete, we were almost wallflowers. You go to practice and then you go home and do your thing. I mean these guys are drinking beer. Today it’s much more competitive.

JQJ: You’re not going to be out at the club.

WR: I played hockey. When I played in Europe it wasn’t a problem going out for a few drinks. But when I played in the states it was pretty rigid. Back then it wasn’t for a career you were going to make a lot of money and become a brand and sell a lot of clothes.

GP: Rick also talked about the body type of an athlete back then. Today everyone takes supplements…they’re all almost like Adonis, they’re all shredded. Back then Rick said we would’ve been in what you would call pretty good shape. I mean you are athletes but you just don’t look like one. It’s a different body type now.

MS: Was it easy to film the baseball scenes? I mean you all had participated in athletics before, right? Wyatt, you played hockey…

GP: I played football. On the set we would have baseball practice every morning. We had a couple guys who had played professional ball. One had played for the A’s, and a couple of played in college. So those guys helped out the guys who might not have had that much baseball experience. We also had to do a skills video as part of our audition. I think Quinton had the most entertaining non-baseball video.

JQJ: I mean I was an athlete. I could catch a ball. I could throw a ball. But I wasn’t a baseball player and Rick knew that instantly. So what I did is I added more flair as an artist. Again I played basketball so I threw a dunk in there. And I kept trying to throw in more as a person. I was juggling. I had a shot of a dog running through the park, set to the tune of Thin Lizzy’s “The Boys are Back in Town.”

GP: I was filming Ride Along 2 so I went to a batting cage and filmed mine. And then I just laid a bunch of 80s music on top of it. Mine wasn’t nearly as fun as yours.

WR: I had like five minutes to do mine because I had a go somewhere. The casting director called me on Friday and said you have to have it in… By 5 o’clock… On Friday. It was a big festival going on and all my friends were out of town. I didn’t even have a baseball glove. So I ended up going to my brother’s house and had him film me using my seven-year-old nephew’s glove.

MS: The film is full of great 80’s music. Did you listen to any particular songs to get into the feel of the era?

Everybody Wants Some!! is now playing in select cities. For tickets, visit everybodywantssomemovie.com