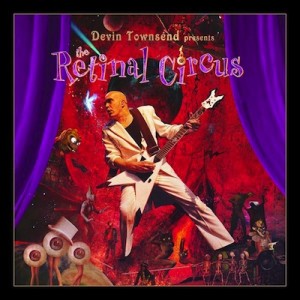 The always entertaining and energetic Devin Townsend is back with a brand new live performance DVD titled “Retinal Circus”. The one night performance was record in 2012 at London’s historic Roundhouse Theater and features 29 songs spanning Townsend’s impressive solo career as well as few songs from Devin’s previous project Strapping Young Lad. The concert is being released on DVD and Blu-Ray as well as double audio CD’s. For those wanting a little bit more the concert is also being released in a number of special edition formats some of which contain everything from guitar picks and art work to Townsend masks and an LP sized pop up “Retinal Circus” stage.

You just never know what will creep out of the mind of the man who brought us albums such as “Ziltoid the Omniscient” and “Epicloud” however, “Retinal Circus” delves further than we could have ever imagined as the performance is a non-stop assault on your senses. The concert features over 3 hours of music that is accompanied by an impressive visual show narrated by none other than fellow guitar virtuoso Steve Vai. The set list does an ok job of covering Devin’s catalog however fan favorites such as “Deadhead” and “Seventh Wave” did not make the cut. Thankfully Devin made up for this by performing two Strapping Young Lad songs. Both “Detox” and “Love?” are a part of the release and also feature a guest appearance by Strapping Young Lad co-guitarist Jed Simon. Fans will surely want to pick this release up for those two songs alone as it was great to hear some SYL material performed live again.

Jam packed with impressive visuals and sound “Retinal Circus” delivers on all levels. Fans wanting to enhance their experience will definitely want to pick up the Blu-Ray format of the concert and for the real diehard Devi fans getting your hands on one of the limited/Deluxe editions is a must!