When I went to the theaters to see “Resident Evil: Retribution”, I had no idea it was going to be one of my favorite movies in the series, nor my favorite of the year.  My expectations were completely blown away with this film.  It is hard to believe that the 5th film in the franchise will surpass the film’s before it…but it sure does! “Resident Evil: Retribution” takes what is amazing about this franchise and amps to to 11 (and above)! It doesn’t get old watching Milla Jovovich in skin-tight leather kicking zombie ass.  It reminds me of Kate Beckinsale in “Underworld” but between me and you Milla does it better.

In this fifth film, there are tons of return characters, despite being dead (that doesn’t mean they are zombies either – see the movie to known what I mean). Michelle Rodriguez comes back in her role of Rain Ocampo from the first “Resident Evil”, as well as another character also. Colin Salmon or better known as “One” also from the first “Resident Evil” comes back with in this installment. My favorite return is Sienna Guillory aka the sexy Jill Valentine comes back, this time as a baddie.  She is mega-hot and also kicks some mega-ass.  Oded Fehr from “RE: Apocalypse” and “RE: Extinction” comes back from the dead but not the way that you would think. We find out what happened to Luther West (Wentworth Miller) as he returns as well. Lastly, and probably fan favorite Albert Wesker (Shawn Roberts) is back and very helpful to Alice – or is he?

What I liked about the opening of this film is that you do not need to see the first five films in order to enjoy this.  It literally goes back and covers all the important ground.  Now if you have seen the previous film it only makes better, like the end scene from “Afterlife” being played backwards in slow-motion. Perfect way to start the movie. The 3D effects in the film are the best that I have seen throughout the entire year! Seriously! There is tons of in-your-face moments and also adds to some great jumps. The depth added throughout and it really works with the films’ action.  Speaking of the action, from the moment it starts, this film is a 90+ minute rollercoaster ride.

Official Synopsis: The Umbrella Corporations deadly T-virus continues to ravage the Earth, transforming the global population into legions of the flesh eating Undead. The human races last and only hope, ALICE (Jovovich), awakens in the heart of Umbrella’s most clandestine operations facility and unveils more of her mysterious past as she delves further into the complex. Without a safe haven, Alice continues to hunt those responsible for the outbreak; a chase that takes her from Tokyo to New York, Washington, D.C. and Moscow, culminating in a mind-blowing revelation that will force her to rethink everything that she once thought to be true. Aided by newfound allies and familiar friends, Alice must fight to survive long enough to escape a hostile world on the brink of oblivion. The countdown has begun.

Sony is releasing this film in a very nice 2-Disc Combo Pack, including the Blu-ray 3D, Blu-ray, and DVD, as well as UltraViolet digital streaming copy.  The film works well in 2D but it looses a bit of its charm.   The 3D in the theaters was great but I have to say that the 1080p transfer on the Blu-ray is really sharp and draws you in so well.  The film literally plays like a video game, which is the way it should be and works best with the transfer.  The DTS-HD Master Audio 5.1 sounds beyond amazing.  Since the film is literally a 90-minute roller coaster ride, the sound is constantly  pumping giving the surround system quite the workout.

The special features on this release is nothing short of stunning just like the film itself.  I am nothing but 100% satisfied that there are actually 3D special features.  Sony is getting a name for doing this after “Men in Black III” and “The Amazing Spider-Man”.  It is not much but there are still deleted & extended Scenes and Outtakes in 3D that are exclusive to the Blu-ray 3D Combo Pack and Blu-ray. On disc two there are also six exclusive featurettes, each better than the next. ”Maestro of Evil: Directing Resident Evil: Retribution” looks into Anderson returning to the franchise as the director of the film. “Resident Evil: Reunion” looks into this huge cast reunion as I described above. “Evolving Alice” show about Jovovich keeps playing Alice fresh. “In Design & Build: The World of Resident Evil: Retribution” looks into creating the gigantic sets for this gigantic film. “Resident Stuntman” gives a look into the action stunts with stunt coordinator Nick Powell. Lastly, “Code: Mika” is a short look with star Mika Nakashima, as she reprises her role as J-Pop Girl.

The rest of the bonus features include various cast, director and producer commentary tracks. They each provide different perspectives from the production.  There is also on final featurette “Drop (Un)Dead: The Creatures”, which is a look into the various creatures from the franchise with the cast/crew. There is also an interactive map called ” Project Alice: The Interactive Database”, which will allows you to investigate the living, the dead and the undead of the “Resident Evil”. I would also like to note that “The Complete Series: Resident Evil 1-5” will also be available on Blu-ray with UltraViolet starting December 21st, including each 2D feature film in the Resident Evil franchise. 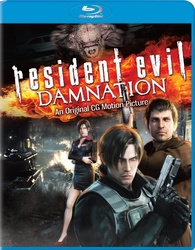 “Resident Evil: Damnation” is the CGI animated sequel to “Resident Evil: Degeneration”. I wasn’t a mega big fan of “Degeneration”. I thought they could have done much better with the “Resident Evil” franchises’ first trip to CGI animation. Well “Damnation” is the answer that “Resident Evil” fans have been looking for. It follows the continuing efforts of special agent Leon Kennedy as he tries to reveal Umbrella Corporation evil-doings.  My only issue with the film was that it was a perfect specimen for 3D.  I have no idea why Sony didn’t put this out as a 3D Blu-ray release, it would have been amazing.  Nonetheless, the film is action packed and packed with some amazing effects.

Sony’s official synopsis: “Kennedy sneaks into a small Eastern Europe country to verify rumors that Bio Organic Weapons (B.O.W.s) are being used in war. Right after his infiltration, the US government orders him to leave immediately. Determined to uncover the truth, Leon ignores the order and enters the battlefield to end the chain of tragedies caused by the B.O.W.s.”

Sony’s release delivers a combo pack including the Blu-ray of the film, as well as the Ultraviolet digital streaming version of the film. The 1080p transfer looks absolutely perfect and is presented in 1.78:1 aspect ratio.  I was literally blown away with the video presentation. But like I said this would have been 10x better it was delivered in 3D.  The audio track is also amazing packing a sharp Dolby TrueHD 5.1.  The film is major action packed and literally gave my surround sound a run for its money.

The special features are good but not amazing. There is a behind-the-scenes featurette called “The DNA of Damnation”, which dives into the production but is a little short. “Las Plagas: Organisms of War” looks into the creatures that were created in the film. There is a funny gag reel included on English version, I always love it when CGI films show their faux funny side. Lastly there is a conceptual art gallery, which is actually quite impressive since this showed the origin of where these designs started. 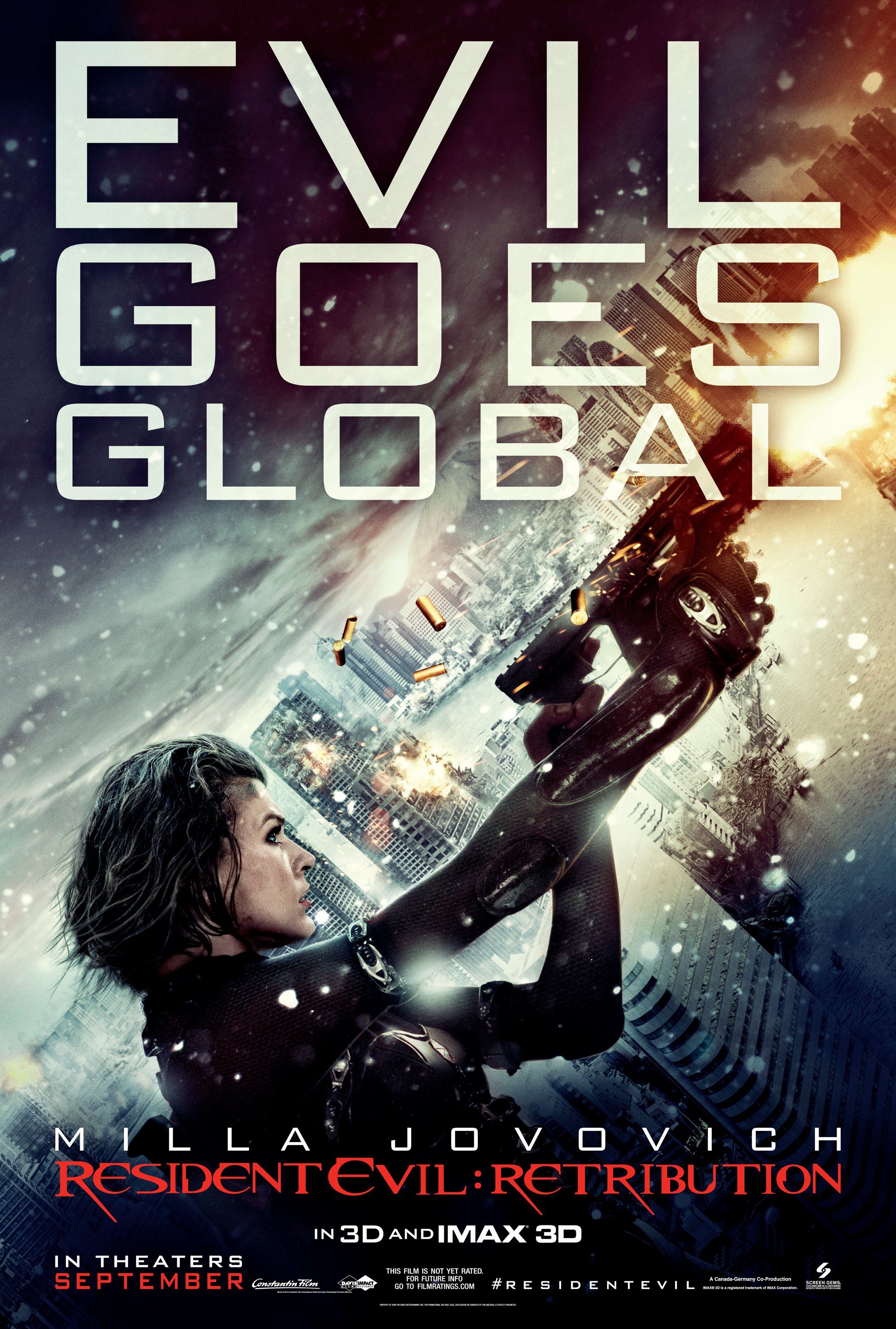 Screen Gems’ RESIDENT EVIL: RETRIBUTION, opens on September 14 and Media Mikes is happy to bring you this great giveaway. We are giving away five (5) pairs of ROE (Run of Engagement) passes and 10 RESIDENT EVIL: RETRIBUTION T-shirts. If you would like to win one of these great prizes, please leave us a comment below or send us an email and let us know your favorite “Resident Evil” character. This giveaway will be open until September 14th at Noon, Eastern Time and is only open to residents of the United States. Only one entry per person, per household; all other entries will be considered invalid. Once the giveaway ends, Media Mikes will randomly pick out winners and alert the winners via email.

The Umbrella Corporation’s deadly T-virus continues to ravage the Earth, transforming the global population into legions of the flesh eating Undead. The human race’s last and only hope, ALICE (Milla Jovovich), awakens in the heart of Umbrella’s most clandestine operations facility and unveils more of her mysterious past as she delves further into the complex. Without a safe haven, Alice continues to hunt those responsible for the outbreak; a chase that takes her from Tokyo to New York, Washington, D.C. and Moscow, culminating in a mind-blowing revelation that will force her to rethink everything that she once thought to be true. Aided by newfound allies and familiar friends, Alice must fight to survive long enough to escape a hostile world on the brink of oblivion. The countdown has begun.