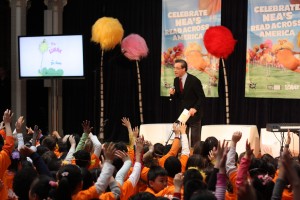 March 2, 2012 – The New York Public Library was filled with Truffala trees this morning in celebration of the kickoff of Read Across America 2012 and the release of The Lorax on Dr. Seuss’ 108th Birthday.

Three hundred NYC public school children, dressed in bright orange Lorax shirts and his trademark yellow mustache, were treated to a reading of the original Dr. Seuss classic by the film’s stars Danny DeVito and Zac Efron at the event hosted by the National Education Association (NEA).

Since 1998, Read Across America has motivated kids of all ages to continue reading every day as research shows those children who do so wind up becoming better students at school. DeVito, who plays the Lorax himself, spoke at the event about the importance of reading at home, “We should encourage youngsters and their parents, and their aunts, their uncles, grandfathers, to read to them. And let them read to you. It’s a really great way to broaden your horizons and it’s a stepping stone to a better life.”

In addition to a reading of The Lorax, the audience got a sneak peak at the film which opened today. In it Efron plays Ted, a 12-year old boy who sets out to impress his dream girl Audrey (played by Taylor Swift) by finding her a real live tree. There are no more where they live, and in flashbacks we learn of the Lorax who had fought to save them. DeVito recalled another one of his movies when talking about the story’s positive environmental message: “I did a movie called Death to Smoochy and Smoochy was a very big environmentalist and he used to say when they were commercializing him, ‘You can’t save the world,’ one person can’t save the world, ‘but you could make a dent!’ You know? You can really start it. So one boy or girl or adult or anybody who just clicks in and thinks, ‘I can make a difference, I can shut the lights in the house, I can plant seeds, nurture the garden. I could take care of other people…’ You take from the Earth, you take from each other, but you give back. It’s a two way street.”

The curious students at the library were also given the chance to ask questions of the two cheerful actors, such as:

Third Grader: How do you make the characters look so real?
DeVito: Okay, well the first thing we do is we read the script. Zac and I read the script…and we perform in front of a video camera the way we read the lines.
Zac Efron: Then they take all the crazy things that he does when he reads his lines–
DeVito: And he does!
Efron: He gets really crazy when he reads his lines.
DeVito: And then they use those to draw with the computer and they try to capture the movements of the actors in the movie, so it looks real.

Third Grader: How do you think Dr. Seuss came up with The Lorax?
DeVito: Well I think that Dr Seuss wrote this book forty years ago and it’s still current and going on today because he probably–I’m just guessing now–he probably was looking around at what was going on in the world and saying a lot of people are doing certain things like taking the rain forests down and wasting things…and what he was looking for was a champion. The trees can’t speak, they have no voice, so he was looking for somebody to be the speaker for the trees and a champion for the trees…I think that’s where it all comes from, The Lorax. And then he just figured it couldn’t be a Lorax going out speaking for the trees, but it needs to be a human being…who cares enough for the trees.

Third Grader: Why is the Lorax so hairy?
Devito: Well the thing about it, in the forest even though it looks like it’s always summer, sometimes it gets a little cold. And that’s why he has the mustache and all the fur on. He also does live down underground, under that stump, so it’s pretty chilly at night down there. Especially when he’s eating, he likes to keep his mouth warm!

At the conclusion of the event, all of the students recited the NEA’s Read Across America Pledge and the costumed Lorax character joined NYC’s PS 22 chorus in performing the song “Let it Grow.”

You can read more about Read Across America, including the NEA’s Lorax Student Earth Day, at their website: www.nea.org/readacross

All article photos by Mike Sonesen 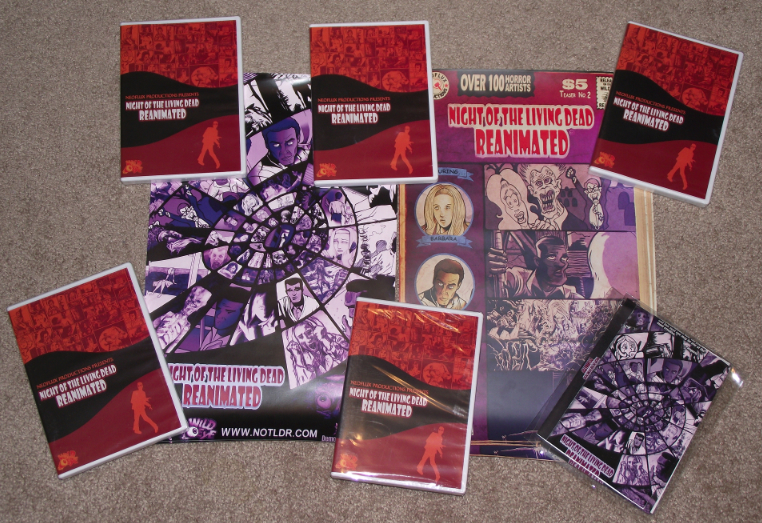 Are you a fan of horror? Are you a fan of zombies?  Then I am sure you have heard of “Night of the Living Dead: Reanimated”…right? MovieMikes would like to giveaway the follow DVD’s and posters from the film. If you would like one of these, please leave us a comment below or send us an email and let us know you your favorite zombie movie. This giveaway will be open until Monday August 1st at Noon, Eastern Time. Once the giveaway ends, Movie Mikes will randomly pick out winners and alert the winners via email.

“Night of the Living Dead: Reanimated” is a mass collaborative artistic re-envisioning of George A. Romero’s 1968 cult classic, “Night of the Living Dead”. International artists and animators were invited to select scenes from the film and reinvent them through their artwork. Open to all styles, media and processes the results ran the gamut with scenes created in everything from puppet theater to CGI, hand drawn animation to flash, and oil paintings to tattoos. This cacophony of works was organized and curated across the original film’s time line in order to create a completely original video track made entirely out of art. The result of this project is an experimental take on the cult classic. What it forfeits in visual continuity, it gains in variety.

Let me break it down for you…basically you mail in 10 shirts. Tag the 1 of 10 they want printed with your ink selection and return address. The shirts get printed, press, and shipped to you free of charge. (Button downs, sweatshirts, etc are allowed as well as long as they meet the specs on the sheet and are screen- printable).