Are you ready to celebrate the annual Purge? Nearly every tattooed, face painted, vein bulging, rotted teeth maniac featured in the latest offering seems to be. “The Purge: Anarchy” takes us to 2023, a year after the previously featured Purge with a new batch of disposable characters hoping to survive the 12 hours America has made all crimes legal. Out of all the crimes that are now legal, everyone gladly picks up their nearest sharpened tool shed item and freshly polished automatic rifle, and settles on a night of murder. This time around, we’re not confined to an upper middle class home, but instead we’re placed in some rotting downtown urban warfare.

For this second installment, to what I assume will be a never ending franchise until the one that doesn’t make money, we’re introduced to three separate storylines. First off is the young, well-to-do couple, Shane (Gilford) and Liz (Kiele Sanchez). They’re one of those annoying shoppers that wait until the last possible minute to get groceries, but the real kicker is that they’re going through a shaky separation. Bad timing if you ask me. There’s also Eva (Ejogo) and Cali (Zeo Soul), a mother and a daughter just hoping to survive another annual Purge in their decrepit apartment building. Finally there’s Leo (Grillo), a father hoping to avenge his son’s death by dressing all in black and being armed to the teeth like Frank Castle. I’m sure you’ve already pieced together that they’ll eventually all meet-up, but the real unpredictable fun comes when they have to stick together to survive the night.

While the last “Purge” felt like someone left the “Panic Room” on simmer, the latest entry goes head on into dismemberments, bullet riddled bodies, gore and urban combat. It seems like one of the director’s favorite cult classics might have been “The Warriors” as we roam from one outlandish incident to another. Despite our characters quietly lurking, the film’s pace seems to be in top form as it finds clever ways to keep the anarchy engaging and absorbing. The plight of our characters isn’t an emotional investment, more than it’s a grotesque investment in the joy of watching another kill or be killed scenario.

Meanwhile, the director has still failed to create a working theme representing class warfare and race equality. He seems to believe the audience is too dense to pick up on the already implied subtleties so he proceeds to insert poorly written dialogue into actor’s mouth and further disrupts the flow with characters talking over obvious visual cues. Early on we’re introduced to a AK-47 toting pacifist who’s obviously the 2023 embodiment of Che Guevara who will obviously be making an appearance, but is given nothing of relevance to say. In more capable, demented hands, one could easily assemble a thoughtful good time.

As pure testosterone fueled savagery that’s aesthetically pleasing to the eyes, this “Purge” sequel works. As a potential cult classic with social and political commentary, it fails once again. Demarco may want to consider bringing on a second person to help him with the next “Purge” movie if it’s going in the direction I believe it’s going. If he’s hoping to hunt down some bigger issues, he may find out he’s unskilled enough to tackle them. He may just want to stick to blood and guts in poor taste and quenching American moviegoers never-ending thirst for sadism. 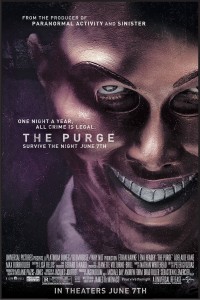 It sounds like a sweet deal…unemployment is at 1% and crime is at its lowest ever. As long as you exclude the Purge, 12 hours of the year where mayhem reigns supreme. The year is 2022 and the only significant differences are that we have new founding fathers who’ve lead America on a new path of enlightenment; one that is gleefully coated with blood. For half a day in the month of March, starting at 7 p.m., all emergency services are suspended and all crimes are made legal, including murder. This begs multiple questions in the first couple minutes of the movie. What happened in America for the solution of our problems to be a murder-thon? Can a night of carnage really be worth 364 days of peace and prosperity? Is the Purge just a huge excuse to eradicate those deemed poor and useless by society? Well, we’re just gonna have to ignore those questions.

After a very simplistic explanation of the Purge, we meet James Sandin (Ethan Hawke). He lives in the largest house in his upper middle class neighborhood. We then meet his lovely wife Mary (Lena Headey), his teenage, school girl outfit wearing daughter, Zoey (Adelaide Kane) and his loner oddball son Charlie (Max Burkholder). I’m surprised there wasn’t a golden retriever named Max to complete this family. After the introduction of our soon to be victims, we go through the motions of a dinner and conversation. Even when the family locks down the home and the Purge begins, the family just goes through the motions. Of course this would be a boring movie if everything went according to plan. The young Charlie watches in horror on the home’s security cameras as a ragged bleeding man pleads for his life (Edwin Hodge). As the only character with a conscience, it’s up to Charlie to let the unknown man in and give the movie some excitement. A mob of masked people arrive outside the home. Only one of the mysterious assailants takes off his mask to talk directly to the family. This polite and well-spoken lunatic (Rhys Wakefield) tells the family to hand over the “filthy homeless pig” and be spared. Or suffer the consequences when they rip the protective metal sheets off the house.

Before this movie began, it had two paths to choose from. A futuristic movie that went over the social ideas of class warfare and America’s obsession with violence or it could have been a violent fist pumping good time. I give credit to writer/director James Demanaco for going straight down the middle of these two paths. He drops little hints of problems within our own society, but not enough to nauseate us. He also manages to sprinkle in some suspense before giving us the blood splattering good time we know is coming. The acting by the two leads isn’t anything spectacular, but it isn’t terrible. There are plenty of things that prevent this movie from becoming the fantastic thriller I know it could have been. Our main characters aren’t fleshed out and lack sufficient background to care about their plight. It’s amazing how the first half of this movie has no character development. There’s also the questionable motives by the family, the crazed intruders and even the bloody stranger. My review could have easily been a list of questions directed at each character’s actions.

But as the film wound down and I realized those nagging questions weren’t going to be answered, I turned off the thought processes in my brain and enjoyed the flick. With false scares and jump out of your seat moments, it’s a fun little movie. Even though the pacing at the beginning is a bit off, the final 30 minutes of this movie had every eye in the audience glued to the screen. I have to admit though that one final question popped into my head as the crowd cheered on the suburban family fighting back against their intruders. How many people are watching this and thinking the Purge actually wouldn’t be a bad idea? Is it really that far-fetched to assume citizens would approve of a concept like the Purge? These questions were solidified as applause arose from the crowd as an axe was violently driven into someone’s spine. Considering I’ll never be able to afford the security system in this movie or last in a dystopian future like this, I don’t think these are questions I want answered. 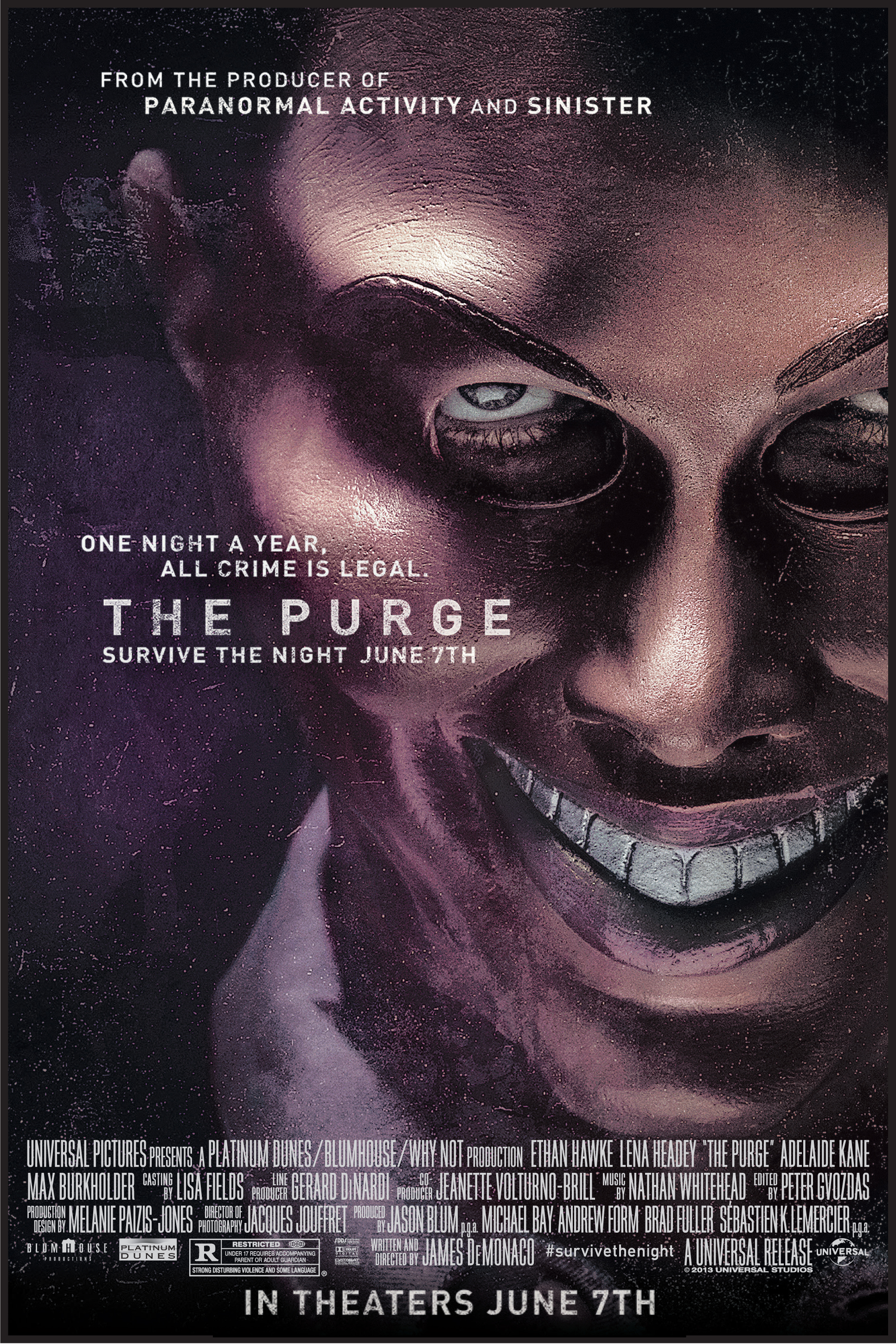 Universal Pictures presents The Purge in theaters everywhere on June 7!

The Purge follows one family over the course of a single night… From sundown to sunrise, for 12 hours, all crime is legal. Four people will be tested to see how far they will go to protect themselves when the danger of the outside world invades their home.

The question is… Would You #SurviveTheNight? Take the quiz to find out! Warn your friends The Purge is coming! If you would like to win an exclusive The Purge pack which includes a t-shirt and mask, check out the app below and enter your results in the comments section.

This is giveaway will remain open until June 17th at Noon, Eastern Time. This is open to our readers in US and Canada only. One entry per person, per household. All other entries will be considered invalid. Media Mikes will randomly select winners. Winners will be alerted via email.

To celebrate the release of “The Purge” on Friday June 7th, Media Mikes is happy to be giving away some ROE’s, valid beginning Monday, 6/10 – run of engagement. If you would like to enter for your chance to win one of these great prizes, please leave us a comment below or send us an email with your favorite recent horror film. This is giveaway will remain open until June 17th at Noon, Eastern Time. This is open to our readers in US and Canada only. One entry per person, per household. All other entries will be considered invalid. Media Mikes will randomly select winners. Winners will be alerted via email.

If on one night every year, you could commit any crime without facing consequences, what would you do? In The Purge, a speculative thriller that follows one family over the course of a single night, four people will be tested to see how far they will go to protect themselves when the vicious outside world breaks into their home.

In an America wracked by crime and overcrowded prisons, the government has sanctioned an annual 12-hour period in which any and all criminal activity—including murder—becomes legal. The police can’t be called. Hospitals suspend help. It’s one night when the citizenry regulates itself without thought of punishment. On this night plagued by violence and an epidemic of crime, one family wrestles with the decision of who they will become when a stranger comes knocking.

When an intruder breaks into James Sandin’s (Ethan Hawke) gated community during the yearly lockdown, he begins a sequence of events that threatens to tear a family apart. Now, it is up to James, his wife, Mary (Lena Headey), and their kids to make it through the night without turning into the monsters from whom they hide.