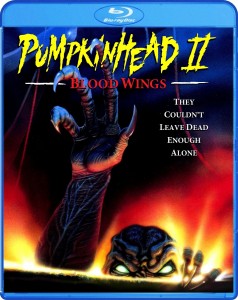 With what the legendary Stan Winston created with “Pumpkinhead”, that gold is continued with “Pumpkinhead II: Blood Wings”. This film is a great follow up to the original. It also has a great cast including Amy Dolenz (“Witchboard 2”, “Ticks”), Andrew Robinson (“Hellraiser”), Soleil Moon Frye (‘Punky Brewster”), Hill Harper (“CSI: NY”), J. Trevor Edmond (“Lord of Illusions”), Linnea Quigley (“Return of the Living Dead”) and Kane Hodder (“Hatchet”). Scream Factory also released the first “Pumpkinhead” on Blu-ray a few months ago. Let’s hope they stop at this sequel and leave the next two sequels in obvilion where they belong. This film has non-stop gore and great practical effects. A most for any horror fan.

Official Premise: When five teenagers unwittingly resurrect a demon, nobody is safe from the hideous creature’s gruesome rampage. But this monster is different – inside it dwells the soul of a boy murdered years ago. Can the evil beast be destroyed…without killing the innocent boy trapped within?

Scream Factory delivered “Pumpkinhead II: Blood Wings” with a solid 1080p transfer. The film looks great and shines with the films creature effects. The DTS-HD Master Audio 2.0 also delivers with the action and epic score. The special features are good but nothing amazing. There is featurette called “Re-Creating The Beast”, which features new interviews with special effects artists Greg Nicotero, Gino Crognale and actor Mark McCraken (Pumpkinhead). There is also “Making Movies”, which is an interview with director Jeff Burr. The special features were all suppose to include a new audio Commentary with director Jeff Burr and some Behind-the-scenes footage but that is nowhere to be found. 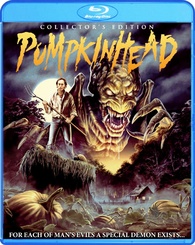 “Pumpkinhead” may not be the best horror film ever but it is a quite memorable one. I love the character of Pumpkinhead and what it stands for in the horror genre…and what that is is outstanding use of practical effects. It shouldn’t come as a surprise though since it was directed by the late Stan Winston (aka the guy behind the dinosaurs in “Jurassic Park”). This film has always held up and continues to over the years. Thanks to Scream Factory for giving this horror cult classic horror a real solid “Collector’s Edition”. Backed by an outstanding genre cast including Lance Henriksen (“Aliens”), Jeff East (“Deadly Blessing”), Joel Hoffman (“Slumber Party Massacre II”) and Kerry Remsen (“A Nightmare On Elm Street 2: Freddy’s Revenge”), this is a must own for any horror fan.

Official Premise: When a group of teenagers inadvertently kill his only son, Ed Harley (Lance Henriksen, Aliens) seeks the powers of a backwoods witch to bring the child back to life. But instead, she invokes ’the pumpkinhead’ (a monstrously clawed demon which, once reborn, answers only to Ed’s bloodlust). But as the creature wreaks it’s slow, unspeakable tortures on the teens, Ed confronts a horrifying secret about his connection to the beast: and realizes that he must find a way to stop its deadly mission before he becomes one with the creature forever.

This “Collector’s Edition” comes as a solo Blu-ray. I am surprised Scream didn’t add on a DVD as well like they do with most releases. The 1080p is absolutely impressive. I remember renting this film on VHS tape when I was a kid and being scared shitless. Well, now I am able to do that still but with some really impressive visuals. The practical make-up effects really shine with this new transfer. There are two audio tracks included here. There is a new DTS-HD Master Audio 5.1 and a DTS-HD Master Audio 2.0 track. I prefer the 5.1 track since it is really well-balanced, works well with the scares and the film’s score.

Scream Factory again caters to it’s fans and really delivers some amazing bonus content here. There is a brand new tribute to Stan Winston called “Remembering the Monster Kid” with new interviewwith actors Lance Henriksen and Brian Bremer, special effects artists Alec Gillis, Tom Woodruff Jr. and Shannon Shea. There are also brand new interviews with producer Richard Weinman and actors John D’Aquino and Matthew Hurley. For the first time in HD, “Pumpkinhead Unearthed” is included, which is a documentary on the making of the film.

Had enough yet? Well there is still more! There is an audio commentary with Co-screenwriter Gary Gerani and Creature & FX Creators Tom Woodruff, Jr. and Alec Gillis, which is a great listen for sure. There is a featurette called “Demonic Toys”. There is a some more great Behind-the-Scenes Footage. Lastly there is a Still Gallery and a Theatrical Trailer included rounding out the extras. Damn Scream Factory, you guys rock! Horror fans, should know that these guys are also releasing the sequel “Pumpkinhead II: Blood Wings”, this October on Blu-ray as well…just in time for Halloween. After that you guys can stop though since we do not need the Syfy created “Pumpkinhead 3 & 4” at all, thanks but no thanks!