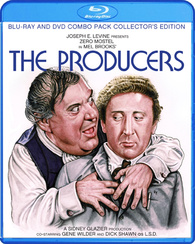 “Mel Brooks’ The Producers (1968)” is easily one of the best comedies of all-time. It stars Zero Mostel and Gene Wilder and is 90 minutes of non-stop laughs. The life of this film was replenished with the 2001 Broadway musical with Nathan Lane and Matthew Broderick. The show became one of Broadway’s biggest success and even spawned a remake from with the duo in 2005. Though the 2005 remake left a bad taste in our mouths…in plain English…it was terrible. So I am thrilled to see the original film back in the spotlight. 45 years have passed and it is just as funny as the first time I saw it.

Official Synopsis: From the endlessly funny mind of filmmaker Mel Brooks comes this triple-Oscar-winning explosion of pure comic lunacy about low-rent Broadway producer Max Bialystock (Mostel) and his high-strung accountant Leo Bloom (Wilder). They discover that, with the help of a few gullible investors, they can make more money on a flop than on a hit. So armed with the worst show ever written – Springtime For Hitler – and an equally horrific cast, this double-dealing duo is banking on disaster. But when their sure-to-offend musical becomes a surprise smash hit, they find themselves in the middle of a Broadway blitzkrieg.

This Collector’s Edition Blu-ray comes with a Blu-ray + DVD combo pack with a reversible cover art. The Blu-ray features a brand new HD transfer and it really looks amazing. It is hard to believe that this film is 45 years old but a nice face lift and has never looked better. DTS-HD Master Audio 5.1 track works perfectly with the films dialogue and musically numbers. If you prefer the original mono track, that is also available on the Blu-ray.

The special features include all extras from previous editions including the featurette “Mel And His Movies: The Producers”, which is a great bonus. There is an hour-long making-of documentary called “The Making of The Producers”, with cast and crew talking about the production. This is a must see for all fans of the film. Also included are a sketch gallery, a 3-minute deleted scene, a photo gallery and a theatrical trailer. I would have loved to see a commentary track from Brooks or Wilder but still a very impressive first time on Blu-ray release.

From The Producers Of Saw and Poltergeist, The Dark Comedy Arrives On Blu-ray Disc And DVD On August 30 From Magnolia Home Entertainment Under The Magnet Label

A dinner party crasher learns manners the hard way in the “fun, minimalistic thriller that piles on the suspense” (Slash Film), The Perfect Host arriving on Blu-ray Disc and DVD August 30 from Magnolia Home Entertainment under the Magnet Label. With standout performances from David Hyde Pierce (“Frasier”) and Clayne Crawford (“24”), The Perfect Host takes viewers on a suspense-filled ride revealing just how far people are willing to go to satisfy their needs.

From the producers of the Saw franchise and Poltergeist, The Perfect Host, follows Warwick Wilson (Pierce), in a performance described “as delicious as the duck Warwick serves at dinner” (Twitch Film), the meticulously perfect host who receives an unexpected dinner guest in John Taylor (Crawford), a bank robber on the run. Yet Taylor gets more then bargained for when he rings Warwick’s doorbell. As the night wears on, secrets are revealed and it becomes clear that nothing is quite as it seems.

An official selection at the Sundance Film Festival, Fantasia International Film Festival and the Sitges Film Festival, co-writers Nick Tomnay and Krishna Jones have created “a seamlessly crafted story that keeps you guessing with every scene” (Slug Magazine). Loaded with special features, The Perfect Host Blu-ray Disc and DVD will be available for the suggested retail price of $29.98 and $26.98, respectively.

Synopsis
Warwick Wilson is the consummate host. The table is set and the duck is perfectly timed for 8:30 p.m. John Taylor is a career criminal. He’s just robbed a bank and needs to get off the streets. He finds himself on Warwick’s doorstep posing as a friend of a friend, new to Los Angeles, who’s been mugged and lost his luggage. As the wine flows and the evening progresses, it becomes clear that appearances can be deceiving.