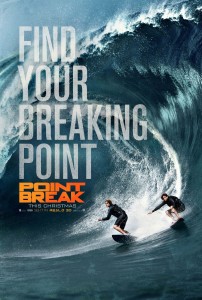 Kathryn Bigelow’s 1991 movie “Point Break” is far from being the “Die Hard” of the 90’s, but it certainly understood how to have fun with it’s silly premise of the FBI infiltrating some bank robbing surfer bros. Stylish, dumb edge of your seat action and entertaining are just a handful of the words I would use to describe Bigelow’s surprise hit. Dumb is the only word I would use to describe 2015’s “Point Break”.

Edgar Ramirez and Luke Bracey hope to conjure up the same absurd bromance that Keanu Reeves and Patrick Swayze displayed 14 years ago. Bracey plays Utah, who in this reimagining isn’t an all-star college quarterback, but is instead a dare devil motocross junkie who decides upon a career in the FBI after his best friend dies attempting one of his dangerous stunts. It’s there in the FBI that Utah, through a truly random hunch, figures out that some globetrotting crooks are actually attempting to complete eight death-defying stunts to achieve enlightenment.

Leading the group of criminal, extreme sport enthusiasts is Bodhi (Ramirez). He’s quite possibly the most infuriating character in recent movie history. He speaks about the destruction of Mother Earth while partying on a gas guzzling yacht in the middle of the ocean and using an abundance of other oil produced equipment to cheat death under the guise of achieving his own personal Nirvana. It’s both equally offensive to eco-warriors and anyone who follows the teachings of Buddha.

Bigelow seemingly understood that a dumb action movie is inherently farcical, so she filled up her movie with enough action to push out those nagging logical thoughts, but this new reboot does the opposite. Director Ericson Core feels that an abundance of exposition is more interesting than the possible heists and fight choreography that our characters could subject themselves to. There’s way too much droll downtime between breathtaking shots of characters escaping death.

Kurt Wimmer, who also used “Total Recall” like toilet paper when remaking it, manages to do the same with “Point Break”. Maybe adaptations and remakes aren’t for Wimmer, who’s done a much better job penning original movies like “Law Abiding Citizen” and “Salt”. Wimmer writes his characters into too many corners, spinning them off into far too many loose ends. Wimmer sloppy adds a lot red herrings, such as the businessman who sponsors the crooks.

There’s certainly a level of dignity that Hollywood must hold itself to when remaking a movie that people consider a classic. “Point Break” is far from being an untouchable Holy Grail in cinema, but there’s no reason it should have been rebooted drug through the mud. Core and Wimmer are clearly more comfortable in their own playing field with their own characters. They seem nervous having to update a character by having him text emojis or being recognizable on Youtube. What made the original duo of Swayze and Reeves cool was action sequences they found themselves in, not their misguided philosophies on saving the planet.

This “Point Break” remake is a disaster that astonishingly arrives on the heels of nearly a dozen better Christmas day releases. “Point Break” lacks enough action to forget its most glaring flaws, and it lacks enough relatable characters to feel anything when conflict happens between an undercover FBI agent and a misguided thief. It’s a failure at nearly every level except its cinematography. It’s certainly pretty to look at, but it’s like unwrapping a neatly wrapped Christmas present only to find a lump of coal. 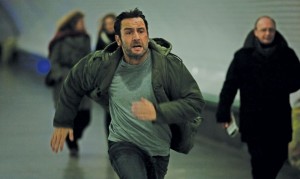 There is something about the French and action films but they know how to do they right. This film does expectational well for kicking some ass. This is jam packed of action including amazing chase sequences and intense violence. I really enjoyed the 1080p video and its 2.35:1 aspect ratio. The DTS-HD Master Audio 5.1 is really clear and crisp and I highly recommend the French audio track. Magnolia Pictures always works hard to find these gems and hopefully they will find more like these.

The story follows a nurse, Samuel, who is just working his job one day and the next he is involved with dangerous criminals and is hunted by the cops and the baddies. His pregnant wife gets kidnapped and he sets out to save her teaming up with the criminal Sartet. It is a race of time and Samuel finds out that this situation is wrapped in a web of deceit and he doesn’t know who to trust.

The special features includes on the release are a little lacking. The saving grace is the really in depth “Behind-the-Scenes Documentary” which takes you through the making of the film. There are some great interviews and behind-the-scenes footage as well. Also included is the “Point Blank” trailer and more trailers from Magnolia Home Entertainment. Overall if you are fan of action films this is a must purchase.