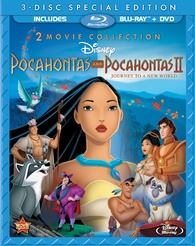 This isn’t the only film released out of the vault though. Besides this film, August 21st saw the release seven animated films over five different Blu-ray, including “The Aristocats”, “Lady and the Tramp II: Scamp’s Adventure”, “The Rescuers / The Rescuers Down Under” and “The Tigger Movie”. Disney if you are reading this, I still want to see a Blu-ray release for films like “Robin Hood” and “The Sword in the Stone”…(hint-hint).

The special features are decent for these films and definitely leave you satisfied.  There is an audio commentary track with Producer James Pentecost and co-directors Eric Goldberg and Mike Gabriel.  Overall not my favorite track ever but still informative.  The next two extras are presented in HD.  “Drawing Inspiration: The Lost Story of Hiawatha” follows Goldberg and animation historian Charles Solomon as they discuss the long-lost animated feature film that was never made. Highly recommended.  There is a deleted song called “If I Never Knew You” with optional commentary with Goldberg, Gabriel and Pentecost. There is also nine storyboarded scenes deleted from “Pocahontas”, running about 15 minutes. “The Music of Pocahontas” is a featurette on the film’s notable music and songs.  There is a cartoon short called “Little Hiawatha” from the 1937 Walt Disney Silly Symphony.  Lastly there is “Disney’s Virtual Vault” which included featurettes and extras from the original DVDs available via BD-Live.