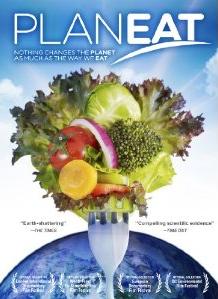 “Planeat” really cares about the planet and delivers their message well…but it plays more like I film I would be forced to watch in school. I was not completely engaged in the film overall through its 71 minutes. Though I still believe the message delivered is important and I give them some slack when it comes to quality. This film makes it case and then backs it up with a lot of evidence and research from prominent scientists.

This film asks a lot of important questions like…Why has the death rate from heart disease and cancer exploded in recent times? Why are the ice caps melting, the oceans dying and the forests being cut down as we produce the food necessary to support our burgeoning populations? These scientists have made it their life’s work to answer these questions.

If the film does nothing else it should help us inspire to make the right food choices in the future. These choices will also assist in reducing risk of heart disease and cancer…while also protecting our environment. The DVD packaging also included two recipes from Whole Foods Market’s Chef Chad Sarno.

The special features included are also interesting. There is a message from filmmakers Shelly Lee Davis and Or Shlomi. There is a 35 minutes short version of the film, which I guarantee you will be played in schools. There is a trailer and a few deleted scenes. Lastly there is an interview with philosopher Peter Singer talking about his comments on the situation.