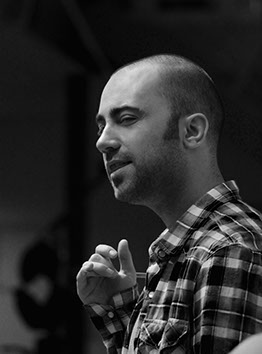 Nick Pittom worked freelance in Video Editing, Motion Graphics and Visual Effects. He wrote, directed and edited a short film called ‘PROTO’, which appeared at the London Short Film Festival and Sci-Fi London Film Festival. He is currently creating Virtual Reality experiences, with two small demos currently released for the Oculus Rift, based on Studio Ghibli films “My Neighbor Totoro”‘ and “Spirted Away”. He is also working on a full VR game called ‘Crystal Rift’, with Jon Hibbins, which is expected to be released some time early next year. Media Mikes had a chance to chat with Nick about developing for Oculus Rift and his Studio Ghibli demos.

Mike Gencarelli: Tell us about your work with Oculus Rift VR gaming?
Nick Pittom: I’d started playing around with the idea of making games with Unity3D, a game engine, and working up some prototypes, but it was after seeing the Rift and people’s reaction to it that I ordered one. After getting to try out the demos that had been made that I decided this was the direction to go on. I’d been trying to get into making films for a while and I suddenly realized that perhaps VR could be an exciting new way to tell stories and build experiences in a way that I could carve out my own path, and it’s going quite so far. I started out making some demos, and after getting some attention from them I’ve moved over into making full games and more substantial experiences. The final consumer version of the kit is some time next year so I hope to have a couple of things ready to go by then.

MG: You have made demos from Studio Ghibli’s “Spirited Away” and My Neighbor Tortoro”; what made you want to recreate these classic scenes?
NP: Starting out working up VR demos I wanted to create something that would grab people right away. I had a big enough challenge creating something that worked in VR, so choosing something that already had great art direction seemed a good way of avoiding some big problems. From there I needed something that was not realistic, as my own level of experience and the technical restrictions of VR would make that problematic, so it felt natural to take something like a cartoon and make it 3D, which would be quite an original take for those films and also for VR. Studio Ghibli has such an awesome style it felt like a natural fit and with Spirited Away being my first film of theirs I decided to go with that. I needed a scene that was enclosed, to keep things contained and manageable, but also recognizable and the Boiler Room was perfect. I first hoped to just make the location, but as I created it I realized it was painfully empty without the other characters, so added in the soot sprites and then quickly Kamaji. The latest version of the Boiler Room also has Chihiro, which was good fun to make! I quickly moved on and realized Totoro would be the most obvious choice to go next, as it’s effectively the mascot for Ghibli. The bus stop scene itself is iconic and had to be the scene to make, including both Totoro and Catbus, both iconic in their own rights. The Boiler Room is not interactive in any way so I felt I had to include something for the player to do and so of course handing over the umbrella became the obvious choice. Really most of the choices with both the demos wrote themselves!

MG: How much time went into each of these demos?
NP: The Boiler Room I got through pretty quickly, getting it out in 6 weeks in all, Kamaji himself I managed to pull together in three or four days. But Totoro was much harder. Being exterior the trees and landscape are not as simple in Unity3D and it has it’s own system that can be tricky at times, certainly less flexible than plain geometry of walls and floors. The animation however was where things got tricky. I modeled and textured the characters, but for that demo I managed to get an awesome animator called Keith Sizemore to help out. He did a great job, as you can see in the demos, but we had some real challenges getting the animations to go over to Unity3D from Maya where they were animated. There’s some tricky technical elements involved in how characters are rigged and set up, and many ways the software can choose to mess that up. But I think perhaps two and half months start to finish for that. All of this was done in my spare time outside of work.

MG: Do you have plans to expand on these at any time?
NP: I actually added Chihiro to the latest version of the Boiler Room demo, which was fun, but I am considering animating the entire scene start to finish. I guess I need to find the time! Otherwise I have other projects that need my attention.

MG: Why do you think these films are so beloved with fans?
NP: The art style is a big part of it of course. There’s such wonderful artistry and talent and craft put into every part of Ghibli’s films, they really are masters of the hand drawn animation. But it’s story, character and design, all working together that really shine through their works. I am sure books can, and indeed have been written about every aspect of what makes this true, but one aspect that stands out in Miyazaki’s work particularly are his strong female characters, all of whom ring true and genuine. I think perhaps in Miyazaki we have an artist perfectly fitted to his art form and every part of his films works so well. On a personal note, I think Princess Mononoke is the strongest film, at least from a storytelling standpoint, but equally it has strong, morally complicated people in a dangerous exciting setting. Good times.

MG: I hear you have one more demo in the cards; can you spill some details?
NP: Originally I had hoped to make a Howl’s Moving Castle demo after the original demo, but someone else got in contact to request I should not, as they had already started on their own. I was happy to oblige, as I was interested in seeing what they made. I’ve not seen it yet, and perhaps it will never be completed, which is a shame. I then decided to work on Cowboy Bebop, but by then I had been in contact with a few interesting people, circumstances changed and I decided to move onto original projects. I’m still considering working something new up as I have Howl’s Castle complete already.

MG: What can we except from your first full VR game “Crystal Rift”?
NP: So, I’m working on three projects actively at the moment. The first is a game called Crystal Rift, which is a VR dungeon-crawler in the form of old-style games like Eye of the Beholder. Jon Hibbins, the creator, demoed it to me at a meetup at Bossa Studios (who make Surgeon Simulator) and asked me to join his project in a creative role. I’ve never worked on a game before so it seemed like a good opportunity to be a part of one and to put my own mark on it. We actually have a Kickstarter up currently for this!. The second project is actually my own Kickstarter that I created to fund a trip to Oculus Connect, a conference in Hollywood. Being from the UK this was quite a distance to travel and expensive, so I made a Kickstarter, the goal of which would give me the money to travel, but would also result in a game I would create that backers could give me ideas to put in. That’s in early stages of design and production, but coming together nicely and should be quite interesting. I’m working with a talented coder and we’ve got some great stuff working out. Nothing to report yet, but hopefully soon!

MG: Do you think that VR gaming will be the future of gaming?
NP: It’s certainly ‘A’ future. I doubt it will replace all gaming, just as consoles have not stopped people playing cards or board games, and just as mobile gaming has not yet wiped out 3DS-style handhelds. But it’s here, it’s amazing and it’s not going anywhere. Anyone who has doubts or believes it is a fad or destined to fail as in the past has certainly not tried the latest prototype (Crescent Bay), which convinced me that the hardware itself is there. It’s ready. It’s the software and experiences that are important to get right now.

MG: What is the biggest challenge you’ve faced developing for this format?
NP: Optimization. Performance. Games struggle to reach 60fps at 1080p HD on consoles, and indeed most run 30fps. We need to be hitting 75fps in 1080p in stereo just for the DK2, and the consumer kit is likely to be 90fps and 1440p. That’s a BIG ask, and means that graphics must adapt to fit that. Looking at something like GearVR, the headset from Samsung that works with the Note 4, that’s an even bigger ask as we have to get 60fps 1440p out of a mobile GPU! Other issues are around usability and experience. What works in games and film or indeed any medium will not work directly in VR. You have to craft experiences and games for VR especially if you want them to work, or at least not cause motion sickness! But I’ve seem some amazing demos and games in VR and in the coming months and years there are going to be a lot of people blown away and very surprised by what VR has to offer.