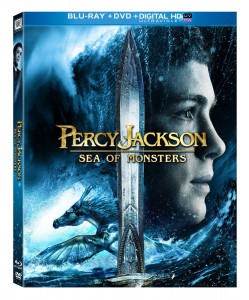 “Percy Jackson & the Olympians: The Lightning Thief” arrived as the next “Harry Potter” but never really gathered much interest. When I heard that they were come with a sequel, I didn’t understand since the first film was not well-received. “Percy Jackson: Sea of Monsters” promised to be much better than the first and it did deliver a more entertaining film for sure. The action is amped up and the visual effects are much better than the first film, plus it co-stars Nathan Fillion which is always great. Still has it problems and feel like a “Harry Potter wanna-be but overall, this film is worth checking out and a vast improvement from “The Lightning Thief”.

Official Premise: The magical, mythical adventures of teenager Percy Jackson — son of the Greek god Poseidon — continue in this heroic, action-packed thrill ride! Out to prove he’s not just a “one-quest wonder,” Percy and his demigod friends embark on an epic, cross-country journey into the treacherous Sea of Monsters, where they battle terrifying creatures, an army of zombies, and the ultimate evil. With time running out, Percy must find and bring home the fabled Golden Fleece, which has the power to save his world…and save us all

Fox delivered “Percy Jackson: Sea of Monsters” as a combo pack release including Blu-ray + DVD + Digital HD digital copy. The 1080p transfer is pretty much flawless and really takes advantage of the CGI effects and amazing visuals. The DTS-HD Master Audio 7.1 is also perfect and really captures the action so well. If you get nothing else from this film and this Blu-ray, you will be blown away with the audio/video presentation. If possible though, this film is much more enjoyable in 3D, so if you have that option but sure to take that route since the visual effects really shines there.

In terms of special features, “Percy Jackson: Sea of Monsters” delivers some decent extras but nothing outstanding. To start we get a motion comic for the character Tyson, who is Percy’s cyclops half-brother. There are three featurettes included, the first is called “Back to Camp Half-Blood”, which features cast taking about coming back for the sequel. “It’s All in the Eye” and “Deconstructing a Demigod” focus on the visual effects in the film. I was really hoping for more depth on these extras since the film is so visual but these are still worth checking out if you enjoyed the film. 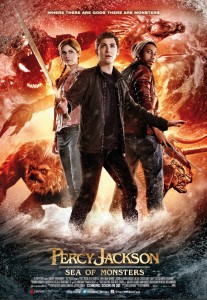 The demigod Percy Jackson (Lerman), the son of Poseidon, is back once again. He continues his training at Camp Half-Blood with his friends, Grover Underwood (Jackson), a satyr, and Annabeth Chase (Daddario), the daughter of Athena. The problem this time arises from the boundary around the camp that protects them. The magic boundary that sprung years ago from the deceased body of Thalia Grace (Paloma Kwiatkowski), the daughter of Zeus, has been poisoned. Now the only chance to restore the boundary and keep Thalia’s spirit alive is the Golden Fleece. But Luke Castellan (Jake Abel), the son of Hermes, also wants the Fleece for his own motivations. He hopes to resurrect an ancient evil and once again attempt to bring destruction to Mount Olympus. Things are even more complicated when Percy discovers he has a half brother, Tyson (Douglas Smith), who is part cyclops and tags along for their journey into the Sea of Monsters.

If you’re a little confused, you may need to watch the first movie or take some Cliff notes with you. However, the Cliff notes are probably a lot more entertaining than this movie. I myself had never seen the first “Percy Jackson” until literally hours before the screening of “Sea of Monsters”. This movie is an improvement upon the first, but that might be because the movie is shorter. We’re once again treated to a barrage of computer animated creatures and uninteresting action sequences. We’re not invested enough to be concerned about a character’s well being. It doesn’t help that there isn’t even the slightest sense of peril. Even when our heroes are fighting from being swallowed whole by a whirlpool sized creature in the middle of the ocean, I found myself fighting a yawn.

It’s been six years since the last “Harry Potter” book and just two since the last movie, but Percy Jackson is still creeping in its shadow. The movie has plenty of similar ideas, but that’s not the problem. Everyone borrows from everyone. I get that. The problem arises when the movie uses quirks as a crutch instead of building up this fantastic new world around its inhabitants. The characters aren’t given room to breathe with an ADHD script and smothering CGI. Instead of character driven scenes and diving into the why’s and how’s of the story, the actors are expected to just “ooh” and “ahh” at the newest monster or helpful item given to them by the Gods. I don’t fault any of the actors. They’ve managed to work well with the hollow script they were handed. I fault the studio for selecting Thor Freudenthal, who directed the forgettable “Hotel for Dogs”, to helm this flick. I fault the studio for thinking Marc Guggenheim, the man who helped pen the disaster-piece “Green Lantern”, would be able to bring life into this series. This shows a huge lack of trust in the books original content and the hope that people will be filling the theater for eye candy and tongue-in-cheek one liners. From what a book fan told me at the screening, the movies even changed major plot points.

Greek mythology and literature in its own respect has lived for thousands of years and still captivates people like any good soap opera. “Sea of Monsters” is automatically forgettable and another abusive adaptation of a beloved book series. However, younger audiences who probably haven’t read the books will eat up this newest adventure. Someone in Hollywood needs to go on a search. Find a screenwriter that truly loves these novels and characters. Someone who can’t wait to get their hands on a copy of the latest “Percy Jackson” book. It wouldn’t even hurt to have a huge input by the book’s author, Rick Riordan. With millions of copies sold and a rabid fan base that’s willing to put up with another poorly adapted movie, I think he knows what he’s doing. Not to sound like the end to a PBS show, but I think it’s time for me to learn more by going to my local library.