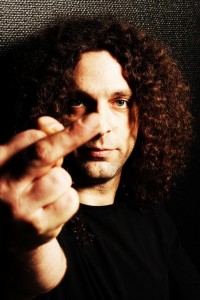 Bob Pantella is the drummer for Cycle of Pain, Monster Magnet, Riot God and Atomic Bitchwax. His band Riot God is set to release their second album at the end of January titled “Invisible Empire”. Media Mikes had a chance to catch up with Bob recently to discuss the new album and how he manages to juggle playing in four different bands.

Adam Lawton: Can you tell us about Riot God’s upcoming album titled “Invisible Empire”?
Bob Pantella: The album actually came out in Europe at the end of November and will be available here in the states starting January 31st. This is the bands second record and I am really excited for it to be released. The album is a little bit heavier than the first album and I think it came out really good. We are very happy with it. At this point I am actually really looking forward to doing another one. (Laughs)

AL: How do you think it compares to the first album?
BP: The heavier approach was definitely on purpose. During the recording of the first record we were sort of scatter brained and didn’t know how it was going to come out. We have been around for a few years now and have worked on our sound. Things this time came together relatively easy.

AL: Did you try to incorporate any new beats or styles into you’re playing on the album?
BP:  We all have our own styles which is something you don’t realize until you listen back to things. We decide is something cool or if it sucks and then put the pieces together. There is thought behind what we do but it is more related to editing ourselves. We spent a lot more time on this album and we were a lot more focused.

AL: Are there any tracks that stand out as favorites?
BP: Picking a track for me is pretty difficult as I am so close to the work. I wish I could hear the songs with fresh ears but that’s impossible. Each time I listen to the album I like something else. At this point I like the song “Tomorrows Today”. At first I liked “Firebrand” but then I kind of got sick of that one. I have listened to all of these songs around 500 times.

AL: Do you have any projects in the works with your other bands?
BP: Cycle of Pain has a few songs in the works. Between JD and me playing all the time we are away a lot so that album is going to take a little bit of time. Monster Magnet has plans to do a new record in the spring.

AL: Do you find it hard splitting your time between 4 bands?
BP: If I didn’t like it I would quit. Playing takes up about 95% of my time. I haven’t been out of the studio in 4 days as we are recording some Riot God material for a special tour release. Monster Magnet is recording a track for an upcoming tribute album and Atomic Bitchwax is recording and writing for an upcoming spring release.

AL: Do you have any other plans for 2012?
BP: Things are pretty well booked up but there are still things being filled in. I am going to be in Germany with Riot God playing the Wacken Festival and then I will be in Europe again with Monster Magnet sometime in June. Things are just nonstop.