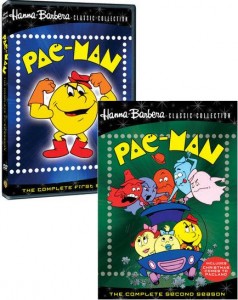 Hanna-Barbera really knows animation.  Back in the day, I would always jump on the chance to visit any product that they delivers and that is still true to today.  Pac-Man is brilliantly voiced by Marty Ingels, known best for his role in “He’s Dickens…I’m Fenster”.  I love his voice and he just embodies the character,  who knew Pac-Man had such a cool voice.  The show follows Pac-Man, Ms. Pac-Man and Pac-Baby as they set off on their adventures. Pac-Man also meets up with those pesky ghosts: Inky, Blinky, Pinky, Clyde and Sue, as well as the dreaded Mezmaron, who wants their power bellets.  The second season also introduces cast additions including Pac-Man’s teenage cousin PJ and the super-heroic Super-Pac! Overall, this show is just plain stupid fun and nothing more.  If you grew up watching this show, revisiting it with these season release will be a real treat guaranteed to get a high score.

The first season includes all 26-episodes from the season.  The second season includes 16-episodes. It is presented in 4X3 full frame and its original aspect ratio of 1.37:1.  The audio format is the typical Warner Archive mono track but works super well with the show. The second season also comes with a great special bonus feature! This release includes the fan-favorite prime-time holiday special “Christmas Comes to PacLand”.  I grew up watching this and look forward to watching it ever year on TV till today…but now I am happy to have it on DVD.  Each season looks great on DVD and is newly restored by Warner Archive.  One question left though where is the “Pac-Man Halloween Special”?

“Pac-Man: The Complete First Season”
Pac-Man! The game that gobbled up a nation’s quarters while its hero gobbled up those annoying Ghost Monsters spawned sequels, spin-offs, toys, games and more. Taking note of Pac-Man’s avid fan base, famed carton studio Hanna-Barbera hit upon the idea of adapting the game for Saturday morning animation – becoming the first video game to make the jump to TV. Kids were immediately enraptured and a score of other arcade favorites soon followed Pac-Man, Ms. Pac-Man and Baby Pac-Man from the gaming console to the cathode ray tube. In this 2-Disc, 26-Episode collection, Pac-Man does battle with Inky, Blinky, Pinky, Clyde and Sue, the Ghost Monster minions of the dreaded Mezmaron, who lusts after Pac-land’s precious power spheres. Aided by his plucky and charming wife and son, Pac-Man saves the Pac-President, confronts the vampiric Pacula, discovers the Abominable Pac-Man and more. Pac-Venture awaits – no quarters required!

“Pac-Man: The Complete Second Season”
Pac-Man returns for a Power Pellet chomping second season of adventures, with some very special cast additions – teenage cousin PJ and the super-heroic Super-Pac! Together with the rest of the Pac pack, they continue to thwart Mezmaron and his minions while time-travelling, battling Robo-Pacs and Pac-Apes, and taking a trip to Pac-Hollywood. Save your quarters, this game’s been extended! Contains all 16 sophomore season adventures. Special Bonus! You’ve hit the high score – this collection also includes the fan-favorite primetime holiday special Christmas Comes to PacLand! Originally airing during Pac-Man’s first season (but as an evening broadcast event), Christmas Comes to PacLand sees Pac, Pepper, Baby and the Pac-Pets enjoying an unexpected snowfall when an errant ghost attack sends Santa’s reindeer WAY off course. Can Pac-Man save the most special day of all? Guest-starring Santa and some very special reindeer.