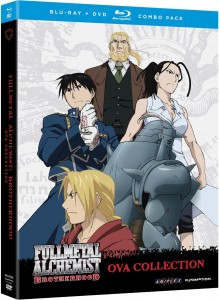 Since the very first episode, I have been a life long fan of the anime series “Fullmetal Alchemist”. So when I saw that there was an OVA collection available for the series, I couldn’t wait to see it. There are four short episodes included on this release are “The Blind Alchemist”, “Simple People”, “Chronicle of the Teacher”, “Yet Another Man’s Battlefield”. Being such a big fan of the show, I have to admit though I was a little disappointed in these since they are rather forgettable. But I do not think it matter much since hardcore fans of the show should be excited to get an extra content that they can.

Official Premise: Amazing secrets and startling facts are exposed for the first time in the Fullmetal Alchemist: Brotherhood OVA Collection, a new assortment of stories set in never-before-seen corners of the FMA universe. Join Ed and Al as they chase rumors of successful human transmutation into a web of shocking family drama and lies. Sneak a glance at hidden sides of Winry and Hawkeye’s personalities. Survive the frigid north with a young Izumi Curtis as she fights to gain a deeper understanding of alchemy. Explore the legendary friendship shared by Mustang and Hughes and watch them grow from military school rivals into hardened brothers transformed by the horrors of the Ishvalan War. You thought you knew the whole story. You thought all the tales were told. The Fullmetal Alchemist: Brotherhood OVA Collection offers proof: You were wrong.

FUNimation Entertainment has delivered a wonderful release here. The OVA shorts look beautiful with their 1080p transfers and are presented in 1.78:1 aspect ratio. Like past high definition presentations in the “Fullmetal Alchemist: Brotherhood” franchise, FUNimation has delivered again.  The colors are vibrant and looks very sharp.  There are two audio tracks on this release.  Believe it or not the English: Dolby TrueHD 5.1 track takes the cake on this release.  The English voice cast has become so recognizable and fan favorite for the site. The Japanese track only includes a Dolby TrueHD 2.0 audio, but hardcore fans will still enjoy.  In terms of special features we get 16 short commercials in “Fullmetal Four Panel Comic Theater”, which adds up to over 40 minutes of footage. They are specifically made for laughs and are quite funny.