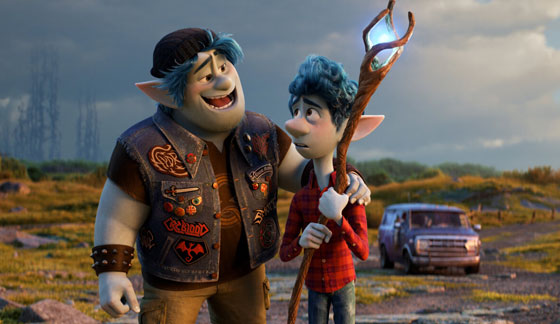 Fathers and sons.  As a father (and a son) I can tell you there is nothing like the bond shared between the two.  Films dealing with this special relationship have been around since time immortal.  From “The Godfather” to “The Lion King,”… from “Field of Dreams” to “Indiana Jones and the Temple of Doom,” the celebration of that bond is timeless.  So, if you had only 24 hours to discover that bond, wouldn’t you do ANYTHING to achieve it?

Ian Lightfoot (Holland) is turning 16 but he doesn’t seem to pleased.  His mother (Julia Louis-Dreyfuss) wants him to invite his friends over for a party but, with the exception of a few of his classmates, he really doesn’t have any.  Ian lives with his mom and his older brother, Barley (Pratt).  Ian’s father passed away before Ian was born and today, to honor his pop, Ian is wearing his dad’s favorite college sweatshirt.  A random meeting with a former classmate of his dad gives Ian a new insight into him.  To make things even more exciting, his mother gives Ian a present that dad intended to give him on this special day.  It seems that dad was a fan of wizardry and has bequeathed Ian his staff.  He has also given him a spell that will allow Ian to bring his father back for one day.  A day that Ian will remember forever.

I’ll have to admit that I went into this film not expecting much.  Obviously, as it was from PIXAR, I knew that visually it would be amazing (and I was right) but from the previews I didn’t think the story would hold my attention.  WRONG!  Helped by the strong vocal performances from the cast, “Onward” is a fine addition to the proud line up of films the company has produced.  It hits all of the emotional notes and, if you’ve ever been a child who longed for a few extra moments alone with your dad, it brings tears to your eyes.

Like most animated films these days, the cast is top notch.  Holland brings his youthful exuberance to the role while Pratt is all blustery bravado.  Both actors inhabit their characters.  Louis-Dreyfuss, Octavia Spencer and the rest of the cast do likewise.  Visually, the film is gorgeous.  Brightly colored and stunningly rendered, this is a film that can stand proudly next to such recent fare as “Toy Story 4” and “UP” as a can’t miss hit for the entire family to enjoy!