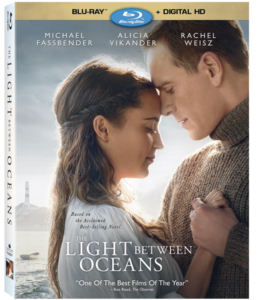 It’s hard to imagine that a film with the talent of “The Light Between Oceans” can be a failure but this film is hard to finish. Michael Fassbender (“X-Men” franchise), Alicia Vikander (“Ex Machina”) are two of the hottest actors in the business. The film just runs so long and the story goes here, there and everywhere. I was lost a few times and nearly sleeping the next. So despite the talent included, skip this!

Official Premise: Lighthouse keeper Tom Sherbourne (Michael Fassbender) and radiant, spirited Isabel (Alicia Vikander) live together in married bliss on a remote, rugged island off the coast of Australia. But their windswept world is turned upside down when Isabel learns that she’s unable to bear a child. One day, a drifting lifeboat washes ashore with a crying baby in it. The dilemma the couple now face will echo far beyond the island, engulfing and irrevocably impacting their world — and that of a stranger (Rachel Weisz) — in a passionate story about love, hope, and a fateful choice. Get swept away by this stunning film, with an exclusive bonus Audio Commentary that will pull you deeper in.

The special features included are decent and worth checking out. “Bringing The Light to Life” features cast and crew talking about the film. There is a super in-depth audio commentary with director Derek Cianfrance and his film studies professor Phil Solomon. The last one is “Lighthouse Keeper” looks into the history of the lighthouse with the filmmakers, cast and Cape Campbell Lighthouse inspector/maintainer Rob Sword.