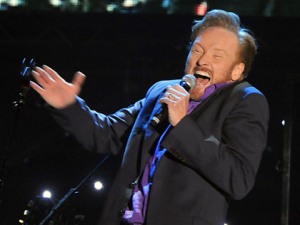 So before I get into the review, I should note that I am not really a major Conan O’Brien fan. Don’t hate him…just don’t follow him. Growing up in New York, I have though attended numerous tapings of the Late Night show and have even met Conan personally. I thought this would be a chance to catch up and see what he has been up to. I really enjoyed the ride and his journey through his post-Late Night concert tour. Conan really knows how to entertain but this documentary is not just jokes. It really shows his struggles and hardships about being on tour and constantly being “on”. This is definitely worth a purchase for fans of Team Coco and also non-fans to get a look at the “real” Conan.

Obviously everyone knows about the battle of the Late Night TV hosts Conan O’Brien and Jay Leno…blah blah Jay Leno (aka asshole) bullied Conan off TV…in so many words. When Conan was paid off, he was told he couldn’t appear on TV for six months. He then came up with this idea to go on tour with a band and spread the word to his fans. This film documents that trip and covers a lot of the stops on his tour from Radio City in New York to his hometown of Boston. You really get to see a different side of Conan in this film. You always see him “on” like I said earlier and always funny. He is funny in this for sure but you see a more human side to him and get a glimpse of what really goes on behind the scenes.

Can’t really say much about the video since it is documentary but it was quite clear and crisp on Blu-ray. The sound is notable since most of the film is songs and music. The special features on the disc are great and definitely worth checking out. If you are fan of commentary, then this disc delivers with director Rodman Flender, Conan O’Brien, Andy Richter, Mike Sweeney, and Sona Movsesian. It is very funny and entertaining. There are also over 40 minutes of additional footage and the bulk of the footage is focused on the comedy between O’Brien and his assistant and writing staff. It is rare that this happens but some of it is better than what is in the film and not sure why it was not included. There is an interview with Conan O’Brien for AT&T U-Verse, which runs about 14 minutes and really digs deep into his life. Lastly there is interview outtakes which is always fun with Conan’s adlibbing. 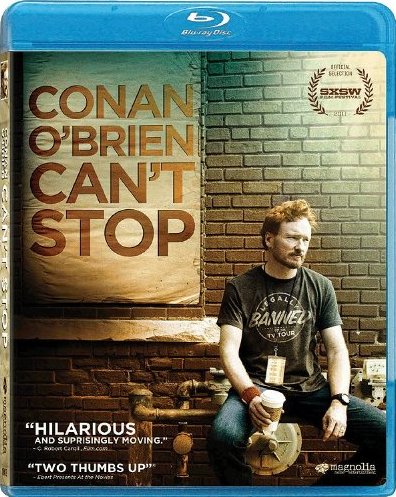 “Hilarious and surprisingly moving.”
– Film.com
A “highly entertaining cross-country extravaganza” (Variety), Conan O’Brien Can’t Stop documents the lauded comedian’s triumphant 32-city music and comedy show, which followed his much-publicized departure from hosting NBC’s “Tonight Show.” Debuting on DVD and Blu-ray September 13, 2011 from Magnolia Home Entertainment, the critically-acclaimed film captures O’Brien’s answer to a contractual stipulation that banned his appearance on television, radio and the internet for six months following his last show.
Featuring O’Brien’s unique brand of off-beat comedy during his live performances along with “behind-the-scenes gold” (Entertainment Weekly), Conan O’Brien Can’t Stop showcases both the funnyman’s prodigious talent as well as his humor and grace during a challenging time in his professional career. Directed by fellow Harvard Lampoon member Rodman Flender, Conan O’Brien Can’t Stop also stars Andy Richter and features appearances by Jim Carrey, Stephen Colbert, Jon Stewart, Jack McBrayer and
Eddie Vedder. The DVD and Blu-ray are loaded with a wealth of bonus features including deleted scenes and extra footage, commentary with Conan and crew members, a music video and a Q&A and will be available for the suggested retail prices of $26.98 and $29.98 respectively.

Synopsis
After a much–publicized departure from hosting NBC’s “Tonight Show,” O’Brien hit the road with a 32-city music-and-comedy show. The “Legally Prohibited From Being Funny on Television Tour” was O’Brien’s answer to a contractual stipulation that banned his appearance on television, radio and the Internet for six months following his last show.