Dreams of the Sugar Plum Fairy and the Mouse King will come to life in a full-on frozen wonderland this winter during Christmas at Gaylord Palms. On Nov. 15 scenes from everyone’s favorite ballet, the Nutcracker, will be reimagined in nearly 2 million pounds of hand-carved vibrant ice sculptures. ICE! will feature four slippery ice slides and live carving stations inside of the Artisans in Action Frostbite Factory.

That’s not the only exciting happening during this year’s annual Christmas at Gaylord Palms.  Guests can now experience the rush – Alpine Rush Snow Tubing – an 18’ 8-lane giant snow hill created with 1.5 million pounds of real Florida snow. Children and adults of all ages will frolic with delight as they speed down these snow covered hills.

Christmas at Gaylord Palms is a mystical experience that boasts the true nature of the season all under a glass enclosed atrium.  Lush gardens sprinkled with poinsettias, grand

With so much to see and do, the best way to experience Christmas at Gaylord Palms is to spend the night with us. Packages are now on sale at ChristmasatGaylordPalms.com.

ICE! is open daily from Nov. 15, 2014 to Jan. 4, 2015, including holidays. The Christmas experience begins Nov. 21, 2014. For more information and to purchase tickets, go to www.ChristmasAtGaylordPalms.com.

About Gaylord Hotels®
Gaylord Hotels® is a collection of hotels and upscale resorts that afford endless opportunities for leisure travelers and conventioneers. The brand’s hallmark—“everything in one place”—provides guests with diverse dining options, quality spa and fitness center services, top-notch entertainment, on-site shopping and endless activities. Gaylord Hotels is a pioneer in the hotel and convention industry with properties in the nation’s most desirable destinations. Gaylord Hotels include Gaylord Opryland® in Nashville, Tenn.; Gaylord Palms® in Kissimmee, Fla. near Orlando; Gaylord Texan® on Lake Grapevine near Dallas, Texas; Gaylord National® on the Potomac in National Harbor, Md.; and The Inn at Opryland® in Nashville, Tenn. For more information, please visit http://www.GaylordHotels.com.

Marriott International, Inc. (NASDAQ: MAR) is a leading lodging company based in Bethesda, Maryland, USA, with more than 4,000 properties in 78 countries and territories and reported revenues of nearly $13 billion in fiscal year 2013. The company operates and franchises hotels and licenses vacation ownership resorts under 18 brands. For more information or reservations, please visit our web site at  www.Marriott.com, and for the latest company news, visit www.MarriottNewsCenter.com.

The Nutcracker ballet returns to NCM Fathom Events this holiday season and for the first time ever will be shown in RealD 3D in select locations.  In collaboration with More2Screen and EuroArts Music, Tchaikovsky’s The Nutcracker will be broadcast to movie theaters nationwide on Monday, December 3 at 2:00 p.m. and 7:30 p.m. (local time).

If you would like to enter for a chance to win free passes to see to attend the one night only screening at AMC Downtown Disney 24, please leave a comment below and let us known what do you like most about “The Nutcracker”. Winners will be chosen on a RANDOM BASIS on November 30th. ONLY ONE ENTRY PER PERSON/PER HOUSEHOLD PLEASE! OTHERWISE ALL ENTRIES WILL BE DISREGARDED. The winners will be will notified via email if chosen to win. Good luck and thanks for supporting MediaMikes.com

The Russian Imperial Mariinsky Theatre was the original home to Pyotr Tchaikovsky’s The Nutcracker in 1892, when it made its worldwide debut. Movie theater audiences will experience the marvelous talents of two of the Mariinsky Theatre’s rising stars – Alina Somova as Clara (Masha in the original Russian ballet) and Vladimir Shklyarov as the Nutcracker. Conducted by Valery Gergiev, this timeless production of The Nutcracker opens with a Christmas Eve party and a young girl, Clara, being given a nutcracker doll by her godfather, Drosselmeyer. Later in the evening when Clara sleeps, she finds herself in the midst of the Nutcracker’s battle against the Mouse King and his army of mice. Coming to Clara’s aid, the Nutcracker is transformed into a Prince and journeys with her to an enchanted island where spectacular celebrations are held in their honor.

Don’t miss your chance to share this holiday tradition with your family in movie theaters for one day only on December 3!  Click here for event information for “Tchaikovsky’s The Nutcracker”. 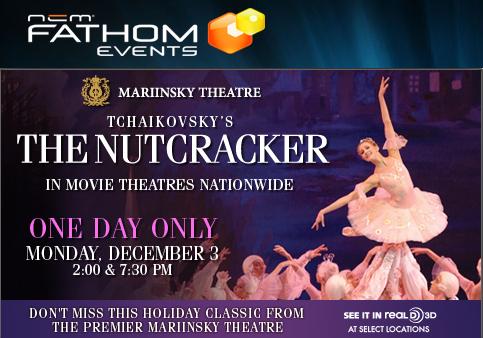 NCM® Fathom Events, More2Screen and EuroArts Music bring the magic of Tchaikovsky’s beloved holiday ballet, “The Nutcracker,” to life on the big screen for the first time in stunning 3-D in select theaters with RealD™ 3D technology. “The Nutcracker Mariinsky Ballet” on Monday, Dec. 3 at 7:30 p.m., with special matinee screenings in select theaters, was pre-recorded at the historic Mariinsky Theatre in St. Petersburg in December 2011 where the original Nutcracker first made its debut 120 years ago in 1892. This special cinematic holiday event will draw audiences into the performance on stage, taking them on a magical journey with Clara, her Nutcracker, exquisite dancers and toy soldiers.

“The Nutcracker Mariinsky Ballet” tickets are available at participating theater box offices and online at www.FathomEvents.com. For a complete list of theater locations and prices, visit the NCM Fathom website (theaters and participants are subject to change). This special holiday presentation will be broadcast to more than 500 select movie theaters through NCM’s exclusiveDigital Broadcast Network and also via the new digital cinema projection systems.

The ballet opens with a Christmas Eve party and a young girl, Clara, being given a nutcracker doll by her godfather, Drosselmeyer. Later in the evening when Clara sleeps, she finds herself in the midst of the Nutcracker’s battle against the Mouse King and his army of mice. Coming to Clara’s aid, the Nutcracker is transformed into a Prince and journeys with her to an enchanted island where spectacular celebrations are held in their honor.

This production showcases the impeccable virtuosity of two of the Mariinsky Theatre’s rising stars – Alina Somova as Clara(Masha in the original Russian ballet) and Vladimir Shklyarov as the Nutcracker. EuroArts Music International filmed “The Nutcracker” in 3-D for this cinematic event.

Under the leadership of General and Artistic Director and renowned conductor, Valery Gergiev, the Mariinsky Theatre, St. Petersburg, Russia was the first ballet company to embrace 3-D technology with the theatrical release of “Giselle in 3D” in 2011, distributed worldwide by More2Screen, and NCM Fathom Events in the U.S.

“The Mariinsky Theatre is one of the world’s leading opera and ballet companies with a far–reaching global profile,” said Gergiev. “Through ground–breaking projects like ‘The Nutcracker in 3-D,’ produced to the same exacting standards for the big screen as for the stage, we are able to share our beautiful productions with many more people worldwide.”

The Mariinsky Theatre was the original home to Tchaikovsky’s “The Nutcracker” in 1892, when it made its worldwide debut, and this brand-new version in both 2-D and 3-D marks the 120th anniversary year of the ballet.

“Attending ‘The Nutcracker’ ballet each year is a long-standing holiday tradition for many families across the world,” said Shelly Maxwell, executive vice president of NCM Fathom Events. “With Tchaikovsky’s eternally popular score, the grand staging and exquisite costumes, this Mariinsky Theatre production of ‘The Nutcracker’ in movie theaters will be a unique way to experience this beloved classic.”

More2Screen is the UK’s leading distributor of alternative content events with more than six years of experience acquiring and distributing world–class opera, ballet, music concerts, theatre and special event films to cinemas across the globe. New content is being added to a fast–growing portfolio on a regular basis and productions released internationally include 2D/3D LIVE and recorded formats. www.more2screen.com

About The Mariinsky Theatre

The Mariinsky Theatre, (formerly the Kirov), is one of the leading opera and ballet companies in the world. Its origins date back to the 18th century and its founder Catherine the Great. As the Imperial Mariinsky Theatre, it was the most famous ensemble of the Tsarist Empire and its history is interwoven with many ballet greats including Rudolf Nureyev, Vaslav Nijinksy, Anna Pavlova, and Michel Fokine. The Mariinsky Theatre is enjoying a second golden age under the dynamic, forward–thinking leadership of General and Artistic Director, Valery Gergiev. www.mariinsky.ru/en orwww.mariinsky.us