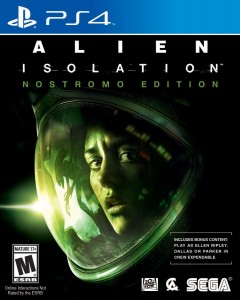 I am always a sucker for anything spawning out of the “Alien” franchise. “Alien: Isolation” promised to be the best of the recent attempts at a good game in the series. The game puts you in the in control of Amanda Ripley, the daughter of Ellen Ripley, as she searched for her mother. The story takes place 15 years after the events of the first movie and another 42 before she is found in the sequel. What I liked about this game the most is that there is only one Xenomorph that hunts you down. Now even though it is just one doesn’t mean that she is not still one tough bitch. I think literally, I died about 25 times in the first 5 minutes of playing this game. This is it horror fans, if you are looking for a great “Alien” video game adaption, look no further.

Official Premise: “Alien: Isolation” is a first-person survival horror game which captures the fear and tension evoked by Ridley Scott’s 1979 classic film. Players find themselves in an atmosphere of constant dread and mortal danger as an unpredictable, ruthless Xenomorph is stalking and killing deep in the shadows. Underpowered and underprepared, you must scavenge resources, improvise solutions and use your wits, not just to succeed in your mission, but to simply stay alive.

The game play itself is quite impressive. The campaign itself runs a very solid 15 hours, so there is plenty of content included in the primary compaign. There are at least five to seven additional missions planned to be released from now till 2015. So even if you beat the game already, there will be some great new content available to fans. If you are a horror fan, then most importantly, you will be happy that this game definitely scared the shit out of me. There is some great sound design in this game and it really created some great tension when playing, which lead to a few solid jumps as well throughout. The design of the game just looks stunning on the PlayStation 4.

I know there are tons of scary games out there like “F.E.A.R”, “Dead Space” and “Resident Evil” but this game definitely had you pausing and running for a quick change of underwear. What I loved about the Xenomorph is that it is very effective based on your moves and your actions, it responds to you and you need to be able to act very very fast or get ready to start the mission over.  Sega really did a great job here. There are a few small issues like the story is a little light and some of the missions get a bit repetitive but it gets quickly overlooked in my eyes when you find yourself hiding in a locker waiting for the Xenomorph to pass you and hopefully not find you. You better cut your nails before you play because this is a real nail-bitter.

Now if you are excited to get to play a Ripley’s daughter, you are going to love the two bonus missions that were included with pre-ordering the game. In this “Nostromo Edition” of the game it contains the“Crew Expendable” expansion pack, which features the voices and likenesses of movie’s stars like Sigourney Weaver and Tom Skerritt. It allows you to play as either Dallas, Parker or Ellen Ripley from the original film as they try and get rid of the Alien. There is also a second expansion called “Last Survivor”, which was included in “The Ripley Edition” of the game, which again allows you to take control of Ellen Ripley, as she is the last person alive on the Nostromo. There are still a bunch more expansions planned for this game, so stay tuned because the fun (if you call getting the shit scared out of you fun) to be had.