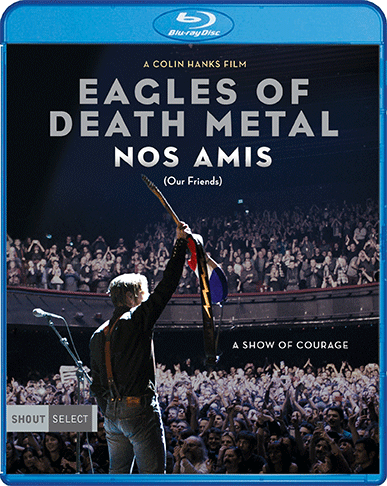 The Documentary “Eagles of Death Metal: Nos Amis (Our Friends)”
Out Now on Blu-Ray and DVD
From Shout! Factory

The November 13, 2015 terrorist attack in Paris claimed 130 lives around the city – 89 of them at the Eagles of Death Metal’s Bataclan Theatre concert.

Eagles of Death Metal: Nos Amis (Our Friends) spotlights the American rock band as they recount their experiences before and after the tragic events. The film explores the deep bonds between band co-founders Jesse Hughes and Josh Homme (also a member of Queens of the Stone Age), as well as the intense connection the band has always had with its devoted fans, which moved them to return to Paris to perform once again in February 2016.

Directed by Colin Hanks, Eagles of Death Metal: Nos Amis (Our Friends) includes accounts of fans who survived the Bataclan attack, extensive behind-the-scenes footage of the band, and interviews with Bono and The Edge of U2 … and serves as a portrait of resilience in the face of unspeakable horror and a life-affirming coda to the events of November 13.

To read our review of the film click here 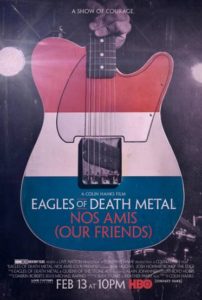 “Eagles of Death Metal: Nos Amis (Our Friends)” follows the American rock band Eagles of Death Metal as they recount their experience before, during and after the tragic terrorist attack at their concert in Paris on November 13th 2015. Directed by Colin Hanks the film spotlights the deep bond of friendship between co-founders Jesse Hughes and Josh Homme as well as the connection the band has with their fans. This relationship along with the groups feeling of responsibility to help Bataclan survivors deal with the physical and emotional wounds is the premise for “Eagles of Death Metal: Nos Amis (Our Friends)” and what brings the band back to Paris just 3 weeks after those attacks.

Sadness, anger, hope and happiness are just some of the emotions you will be exposed to by watching HBO Films latest documentary “Eagles of Death Metal: Nos Amis (Our Friends)”. The entire world was impacted by the terrorist attacks on November 13th 2015 none more so than those who survived it, the families of those who did not and the band who was playing on stage at the time of the attacks. Director Colin Hanks is direct in his approach as he does a great job capturing the emotions of the band and fans through candid interviews as they prepare to return to Paris just 3 short weeks after the attacks with hopes of unity and to provide some level of comfort to those still struggling with the lingering effects of the attacks.

More than just your typical behind the scenes rock doc “Eagles of Death Metal: Nos Amis (Our Friends)” delves deep in to not only the bands love of their fans but also the extremely strong bond between front man Jesse Hughes and drummer Josh Homme. Friendships this strong are a rarity and throughout the course of the films 83 minutes you can clearly see how this life long bond is transferred to crowds around the world. Even in the darkest of moments this relationship seems to serve as the foundation for the bands strength in moving forward. If you watch one documentary this year it should be this one.