Mike Nichols, whose films were both timely and timeless, passed away this morning, a few weeks after his birthday. He was 83.

Born Michael Igor Peschkowsky on November 6, 1931 in Berlin, Germany, the filmmaker emigrated to America with his family in 1937.

Nichols began his career as an actor and, along with other performers like Elaine May, Paul Sills and Ed Asner helped create the popular Second City Comedy Group. He also formed a popular comedy duo with May, sharing the 1961 Grammy Award for Best Comedy Recording for “An Evening with Mike Nichols and Elaine May.” Nichols moved on to Broadway, where he won a record (6) Tony Awards (and seven more nominations) for Best Direction of a Play for the following shows: “Barefoot in the Park,” “Luv and the Odd Couple,” “Plaza Suite,” “The Prisoner of Second Avenue,” The Real Thing” and the 2012 revival of “Arthur Miller’s Death of a Salesman.” He also won Tony Awards for Best Direction of a Musical for “Monty Python’s SPAMALOT” and for producing both the original production of “Annie” and “The Real Thing.” I had the great opportunity to meet Mr. Nichols in New York City after a production of “Death and the Maiden,” a brilliant show which featured Gene Hackman, Richard Dreyfuss and Glenn Close.

Naturally Hollywood soon came calling. His first film behind the camera, “Who’s Afraid of Virginia Woolf?” was not only the first film to come with a rating recomendation that “no one under 18 would be admitted” but the first film where the entire credited cast (Elizabeth Taylor, Richard Burton, Sandy Dennis and George Segal) earned Oscar nominations. Taylor won for Best Actress as did Dennis for Best Supporting Actress. His follow-up film, “The Graduate,” made a star of Dustin Hoffman and earned Nichols the Academy Award as the years Best Director. Among his other films: “Catch-22,” “Silkwood,” “Biloxi Blues,” “Working Girl,” “Primary Colors” and “Closer.” His last film was 2007’s “Charlie Wilson’s War.”

Nichols was a member of the rare EGOT club – a group of 12 people that have won Emmy, Grammy, Academy and Tony Awards. He won an Emmy award as Best Director for the television adaption of Tony Kushner’s play “Angels in America.” Mr. Nichols is survived by three children and his fourth wife, ABC News’ Diane Sawyer. 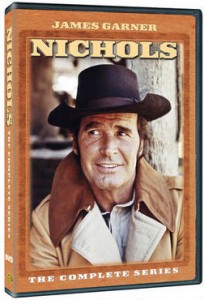 Prior to receive an email about this new DVD release from WB Archive, I have never heard of this TV series “Nichols” but I am a fan of James Garner. So I decided to check it out. The show was originally broadcasted during the 1971/72 season and only 24 episodes were made. Garner is great as always in this Western along with a pre-Lois Lane Margot Kidder but I didn’t lasso me in. I guess I am not the only one either as it didn’t last very long during back in the day.

Official Premise: James Garner is Nichols, the reluctant sheriff of a small Western town, in this quirky, offbeat series. It’s 1914 and a violence-weary Nichols (Garner) has returned to his Arizona home after 18 years in the army. Forced into becoming its new lawman by the tough and powerful rancher (Neva Patterson) whose family runs the town, Nichols refuses to carry a gun as he takes on bank robbers, Apaches, con artists, banditos and more, armed with only his wits and his charm.

The one thing this releases has going for it that it has been newly remastered and looks great for a show that is over 40 years old. It is presented in its original aspect ratio of 1.37:1. For anyone who is a fan of the show, you can give thanks to WB Archive, since they recovered this lost series from oblivion with their Made To Order DVD service. The audio format included is a decent Dolby Digital track. There are no additional special features besides the 24 episodes.