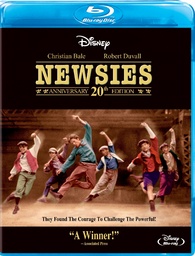 It is hard to believe that it is already the 20th anniversary of the classic family musical. “Newsies” was a film that I grew up watching, as did my wife (one of her favorites) and it is hard to believe that so much time has passed. The film still holds up and still entertains just like it did 20 years ago. “Newsies” is currently also spreading the news on Broadway nightly and that is one thing I always thought this film would work great on the stage. The dance sequences are absolutely incredible and brilliantly choreographed by Kenny Ortega (“High School Musical”) and features music from the Hollywood legend Alan Menken (“Beauty And The Beast”). It is also crazy to see The Dark Knight and Academy Award winner Christian Bale, so young and not only dancing up-a-storm but also singing. “Santa Fe” is one of my favorites musical tracks ever. Fans of this film need to pick this release up immediately and get ready sing-along!

For a film that shot over 20 years ago before high definition, the 1080p video resolution looks clear and impressive. There is a little grain here and there but overall, I think it is a nice transfer and should satisfy most fans of the film with Disney’s state-of-the-art digital restoration. The audio in this film is key since it is a musical and it sounds great with its DTS-HD Master Audio 5.1 track. The music is blended well with the dialogue and is not overpowered. It is even able to come through nicely with your wife belting every line in your ear during each song.

The special features here include nothing new for its 20th anniversary release but still are decent. There is a 2002 commentary track with Director and Co-Choreographer Kenny Ortega, Producer Michael Finnell, Writers Bob Tzudiker and Noni White and Co-Choreographer Peggy Holmes, overall fun and interesting. “Newsies, Newsies, See All About It” is a featurette hosted by Max Cassella, Aaron Lohr and Arvie Lowe Jr. featuring interviews, rehearsal and on-set footage. “Newsies: The Inside Story” is another featurette continuing where the last left off with interviews on production design, costume, cinematography. “The Strike! The True Story” looks at historical context and background from the events that inspired the film. “Storyboard-to-Screen Comparison” is a nice feature with side-by-side view available with optional Commentary by Production Designer William Sandell. Lastly there are two trailers available as well and a sing-along feature in the subtitle menu as well.