To celebrate the Blu-ray™ release of Disney•Pixar’s “Finding Nemo”, Media Mikes would like to giveaway FIVE copies of the 3-Disc Collector’s Edition Combo Pack (Blu-ray™ + DVD). If you would like to win a copy, please leave us a comment below or send us an email and let us know your favorite character in “Finding Nemo”. This giveaway will be open until December 16th at Noon, Eastern Time and is only open to residents of the United States. One entry per person, per household. All other entries will be considered invalid. Once the giveaway ends, Media Mikes will randomly pick out winners and alert the winners via email.

Disney•Pixar’s ―Finding Nemo dives back into homes this coming holiday in breathtaking Blu-ray™. The must-―sea, must-own Oscar®-winning underwater adventure—featuring the unforgettable Marlin, his forgetful friend Dory and the lovable young Nemo—swims into living rooms for the first time ever in high-definition Blu-ray™, Blu-ray™ 3D and Digital platforms on December 4, 2012.

The film fully immerses viewers in the stunning underwater world of Finding Nemo! From the creators of Toy Story and Monsters, Inc., Disney•Pixar’s critically acclaimed and heartwarming tale splashes off the screen with brilliant digital picture, high definition sound and breathtaking bonus features that transport you beyond your imagination.

“Finding Nemo” is one of Pixar’s best films to date and seems to only gets better with age…and the added dimension. It is hard to imagine that this film came out almost 10 years ago now. With a child of my own now (6 months old), I just can’t wait to share this film with her. As with past Disney 3D re-releases like “The Lion King” and “Beauty and the Beast”, “Finding Nemo” is the latest convert.  It looks great in the theaters but I honestly think it is better on its Blu-ray release. There are a few stand out scenes like the first encounter with Bruce the Shark. I seriously got goose bumps, when this scene came on the screen. The Deep Sea Angler scene was also very impressive as well, including a few great jumps from the audience. The overall depth of the presentation looks very impressive overall. “Monsters Inc.” is next for Pixar and then after that we have traditional animated “The Little Mermaid” getting pushed into the third dimension.  I can’t wait and will be counting down the days.

Official Premise: Sea it like never before! For the first time ever, through the magic of Blu-ray and Blu-ray 3D, fully immerse yourself in the stunning underwater world of Disney/Pixar’s “Finding Nemo”! From the creators of “Toy Story” and “Monsters Inc.”, this critically acclaimed and heartwarming tale splashes off the screen with brilliant digital picture, high definition sound and breathtaking interactive 3D bonus features that transport you beyond your imagination. In the depths of the Great Barrier Reef, Marlin (Albert Brooks), an overly protective clownfish, embarks on a daring rescue mission when his beloved son, Nemo, gets scooped up by a diver. With his unforgettable friend Dory (Ellen DeGeneres) by his side, Marlin encounters an ocean full of memorable comedic characters on his momentous journey to find Nemo. Bring home the humor and heartfelt emotion of the epic adventure that captured the Academy Award for “Best Animated Feature Film” (2003) — now more awesome than ever on Disney Blu-ray 3D! It’s Magic In A New Dimension!

This Ultimate Collector’s Edition is presented as a five-disc combo with a Blu-ray 3D / Blu-ray / DVD / Digital Copy.  This is the first time that the film has ever been released on high-definition Blu-ray and boy, does it look absolutely perfect throughout its 1080p transfer.  The vast ocean world that we live in throughout this film literally looks stunning. The 3D MVC-encoded transfer adds the perfect amount of depth to the water and like I mentioned the key scenes mentioned above. To go along with the perfect video presentation, Disney has delivered an even better (if that is possible) Dolby TrueHD 7.1 surround sound track. It works so well with Thomas Newman’s score and every wave and bump in the water throughout. There is also a Dolby Digital 5.1 EX track included, which sounds equally good for those who don’t have 5.1 support.

The special features are perfect and even take a step up from the also newly released “Up” 3D Blu-ray. The “Cine-Explore” Picture-in- Picture commentary is really one of my new favorite features from Disney. It features Director Andrew Stanton, co-director Lee Unkrich and co-writer Bob Peterson as they breakdown every aspect of the film.  “Finding Nemo: A Filmmakers’ Roundtable” is a new exclusive roundtable, which reunites Stanton, Unkrich, Peterson, producer Graham Walters, production designer Ralph Eggleston and technical lead Oren Jacob to celebrate the film’s upcoming 10th anniversary. “Reinventing the Submarine Voyage” looks into the attraction in Disneyland’s Tomorrowland. “A Lesson in Flashbacks” shows Stanton as he discusses the development of Nemo’s story. There is an alternate opening scene presented in through concept art. “Knick Knack” is a 1989 short that debuted in front of the film in its 2003 theatrical release. Lastly there are trailers and sneak peeks for “Monsters University”, “Monsters, Inc. 3D”, “Peter Pan: Diamond Edition” and “Planes”.

The rest of the special features are on Disc 3, also most in standard definition.  “Art Review” features an insight look from Production designer Ralph Eggleston, character art director Ricky Nierva and shading art director Robin Cooper. “Making Nemo” is a nearly 30 minutes behind-the-scenes documentary covering the production. “Exploring the Reef” is an short look at the world’s endangered coral reefs with Jean-Michel Cousteau. “Studio Tour” is a tour of Pixar Studios and its departments with Alexander Gould. “Old School” is short collection of various featurettes. There are seven short deleted scenes presented in storyboards format. There is three very funny outtakes. There are a bunch of publicity pieces including four trailers. “Mr. Ray’s Encyclopedia” is an interactive video look into the real undersea creatures. Lastly “Aquariums” is a collection of ocean floor screensavers, cool but too bad they are not in HD. 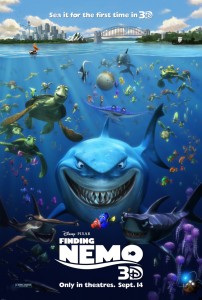 “Finding Nemo” is one of Pixar’s best films to date.  It not only has heart but is action packed and has some of the best jokes ever. I mean the fine touching in this film are just amazing.  One of my favorite are after the mines explode, a little bubble comes up behind two bird sitting on the water surface and one says…”Nice!” and flies away.  Classic! I remember seeing this film in theaters back in 2003 and like a fine wine, “Finding Nemo” gets better with age. It is hard to imagine that this film came out almost 10 years ago now. With a child of my own now (4 months old), I just can’t wait to share this film with her. Watching the film on the big screen was just such a wonderful experience again, the film itself pops off the screen…literally (more on that in a little bit). But the highlight of seeing this film is sitting in the theaters again was watching it with all the kids that are seeing it for the first time.  Just listening to their reactions to the characters and laughing at the jokes was just priceless.  Oh BTW if that all isn’t enough, did I mention the film is in 3D now.

As with past Disney 3D re-releases like “The Lion King” and “Beauty and the Beast”, this film looks just amazing.  There are a few stand out scenes like the first encounter with Bruce the Shark.  I seriously got goose bumps, when this scene came on the screen.  The Deep Sea Angler scene was also very impressive as well, including a few great jumps from the audience. The 3D on the scenes are honestly worth the price of admission alone. Besides those the overall depth of the presentation looks very impressive overall. To be honest though, the 3D really wasn’t the main draw for me on this release.  I just wanted to experience this film on a big screen once more.  I think kids though are really going to be blown away and eat up the third dimension effects for sure.  They even have collectible kids 3D glasses that are mini orange swimming goggles. Trust me you will leave the theater quoting the film.  “Where I am going? I’m going to P. Sherman – 42 Wallaby Lane, Sydney.  If you can’t make it to theater to see this film in 3D, don’t worry the Blu-ray comes out for the first time on December 4th, 2012.

Albert Brooks as Marlin and Ellen DeGeneres as Dory are really such a wonderful cast together. There is just something so timeless about these characters. In fact that is one of the things that Pixar is so great at doing…creating memorable characters. They characters have changed everything.  Whenever you see a clownfish or a Pacific Regal Blue Tang, you always think now, it’s Nemo or Dory…sorry Marlin. Disney is very smart in re-releasing this film, especially in 3D and I highly recommend it. Next up we have the re-release of “Monsters Inc” in 3D this December and also if you are looking for more “Finding Nemo”, director Andrew Stanton recently announced there is a sequel currently in development and is to be released in 2016.  This will land the sequel 13 years after the first film, following the similar path of the 11 year span between “Toy Story 2 & 3”. I have a felling that they are going to do this sequel up real good.  But until then, don’t miss the opportunity to see this great film in theaters again and experience i for the first time in 3D. 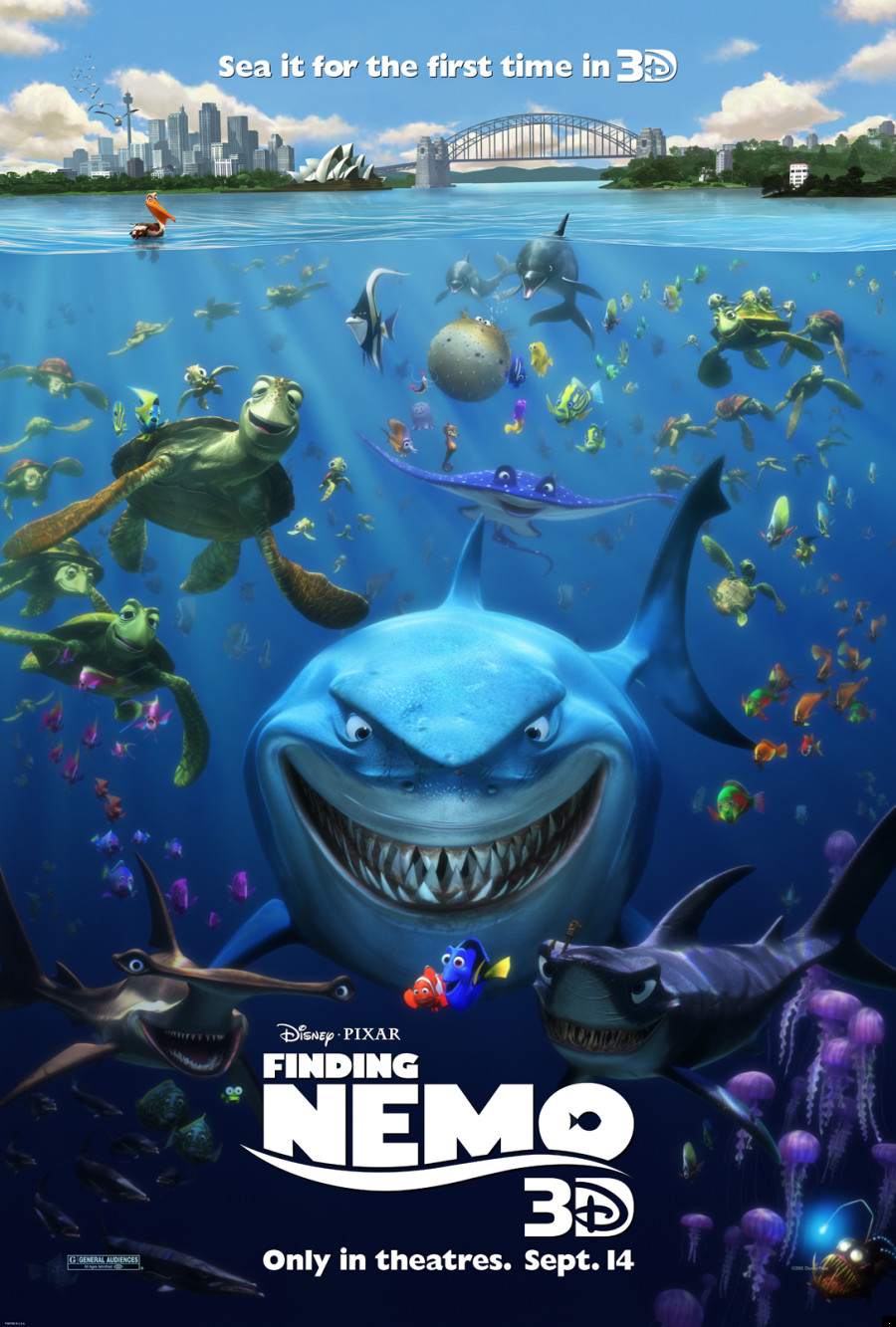 ALL PASSES HAVE BEEN DISTRIBUTED AND WINNERS HAVE BEEN EMAILED! THANKS AGAIN!

If you would like to enter for a chance to win tickets to the following advance screening below, please leave a comment below with your favorite “Finding Nemo” character.  Tickets are limited and will be chosen on a RANDOM BASIS on Friday September 7th.  ONLY ONE ENTRY PER PERSON PLEASE! OTHERWISE ALL ENTRIES WILL BE DISREGARDED. The winners will be will notified then via email and will be instructed how to pick up the tickets.  Good luck and hope to see if you at the screening!

Academy Award®-winning film “Finding Nemo” returns to the big screen for the first time ever in thrilling Disney Digital 3D™. In this stunning underwater adventure teeming with memorable comedic characters and heartfelt emotion, “Finding Nemo” follows the momentous journey of an overprotective clownfish named Marlin (voiced by Albert Brooks) and his young son Nemo (voiced by Alexander Gould). When the two are unexpectedly separated in the Great Barrier Reef, Nemo is carried far from his ocean home and deposited in a fish tank in a dentist’s office. Buoyed by the companionship of Dory (voiced by Ellen DeGeneres), a friendly-but-forgetful blue tang fish, Marlin embarks on a dangerous trek and finds himself the unlikely hero of an epic effort to rescue his son––who hatches a few daring plans of his own to return safely home.