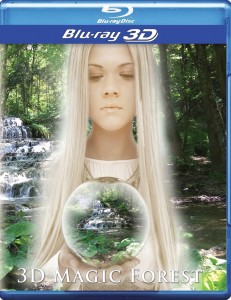 I enjoy watching 3D Blu-rays and I enough watching beautiful landscapes. Put them both together and you get both “3D Magic Forest & Mystic Mountains”. These Blu-rays are very simple yet unique. They take you on a very tranquil and relaxing journey through some amazing landscapes. There is no narration or speaking in either of these films just relaxing spa-like music from Szabolcs Kovi. The music is definitely relaxing, perhaps too relaxing.

“3D Magic Forest” takes us through a visual journey of the Hungarian National Park Bukk. The film runs just shy of an hour and looks great in 3D. “3D Mystic Mountains” run about 40 minutes as well and focuses on Austria’s beautiful mountains and lakes. Ultimate 3D Heaven released these films in beautiful full 1080p with 24 FPM. This really adds to the scenary. I do not think this would be as interesting if it wasn’t in 3D, since it really makes the visuals pop.

While I was watching the television, I couldn’t help but feel like I was watching a scrolling screensaver. I do not see myself ever visiting these locations so it was cool to get a chance to see them in 3D. Each Blu-ray includes full versions of Blu-ray 3D, Green-Magenta and Red-Cyan Anaglyph (3D Glasses Not Included). So even if you don’t have the new cool 3D TV’s, it also works with old school red/blue glasses but not as cool for sure.