When it comes to Wes Anderson’s films, they are this different brand of cinema. There is really nothing like them and they are definitely not for everyone. I am a big fan of all of his work, whether it is “Rushmore”, The Royal Tenenbaums” or even “Fantastic Mr. Fox (which might even be my favorite). This film is so unique and enthralling and leave you literally glued to the screen and hesitating to blink. The young stars of this film really steal the show, Jared Gilman and Kara Hayward. They are mesmerizing on the screen. Rounding out the amazing cast is Bruce Willis (“Die Hard”) as well as Academy Award nominees Edward Norton (“American History X”) and Bill Murray (“Lost in Translation”) and Academy Award winners Frances McDormand (“Fargo”) and Tilda Swinton (“Michael Clayton”). Fans of his work, should not miss it and those looking for something original and different should definitely check it out.

Official Premise: Set on an island off the coast of New England in the summer of 1965, Moonrise Kingdom follows two 12-year-olds who fall in love, make a secret pact and run away together into the wilderness. As various authorities try to hunt them down, a violent storm begins to brew off-shore – and the peaceful island community is turned upside-down and changed forever.

This release is very impressive within its Blu-ray/DVD/UV Digital Copy combo pack. I am a big fan of the Ultraviolet streaming service and I know I will be taking advantage of that aspect quite a bit. The 1080p transfer is extremely impressive and meets Wes Anderson standards and showcases Robert D. Yeoman’s wonderful cinematography. The DTS-HD Master Audio 5.1 surround track believe it or not is the star of the show. The sound is practically flawless and works perfectly with the score and dialogue. The downfall of this release though is the special features. There are only a few dull short featurettes including “A Look Inside Moonrise Kingdom,” “Welcome to the Island of New Penzance,” and a “Set Tour with Bill Murray.” Come on Wes Anderson, we know you can do better? Where’s the commentary track and actually meaningful special features? 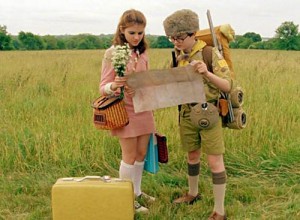 Wes Anderson has always managed to amaze me. From early films “Bottle Rocket” and “Rushmore” to the stop motion “Fantastic Mr. Fox,” he has perfected a simple style of filmmaking that is easily recognizable but not easy to replicate. He continues that tradition with his new film, “Moonrise Kingdom.”

As the film begins, in what appears to be the style of an old 16 mm educational film we all remember from school, we are introduced first to the Bishop family. They live in a plain clapboard house on the water in Rhode Island. Mr. Walt Bishop (Bill Murray) is the quiet, reserved father. His wife, Laura (Frances McDormand) is also quiet but hiding something inside. The children consist of three young sons and pre-teen daughter, Suzy (Hayward). A brief tour of the house and surrounding areas concludes by the water, where we are suddenly introduced to a narrator (Bob Balaban), who informs us that the story we are about to see gets pretty intense when, three days from now, a hurricane is going to hit land.

Told as innocently as its 1965 setting, “Moonrise Kingdom” may be Anderson’s most accessible film to date. But it’s still clearly an Anderson film. From the quirky situations the characters find themselves in to the almost slide-show like camera movement, the film is a celebration of a simpler time when young love had a chance if you fought hard enough. Besides the Bishop family we meet some of the other quirky characters of the story. Young Sam (Gilman) is a run-away Khaki Scout whose brief encounter with Suzy a year ago has resulted in the two becoming pen pals with dreams of running off and being together forever. Scoutmaster Ward (Edward Norton) feels bad because he didn’t realize that Sam was a problem child. However, he doesn’t feel bad enough that he doesn’t arm his young charges with hatchets, knives and a bow and arrow when the begin to search for the AWOL Sam. Also involved in the search is Captain Sharp (Willis) the local law. Other characters, played by well known names like Harvey Keitel and Tilda Swinton, also meld seamlessly into the story. But it is Gilman and Hayward, both making their film debuts, that steal the film and hold it together. Whether holding hands overlooking the water or fumbling through their first kisses, the two youngsters are heartbreakingly believable as they learn the good and bad of first love.

The script, by Anderson and Roman Coppola (Francis’ son, Sophia’s brother) is tight and smart while the photography, by Robert Yeohman, jumps off the screen. And a smart soundtrack, comprised of Alexandre Desplat’s original score interspliced with Hank Williams and Benjamin Britten compositions, helps carry the mood.