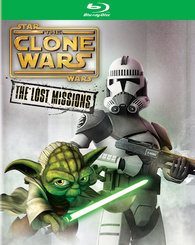 “Star Wars: The Clone Wars – The Lost Missions” consists of the sixth and final season of the Emmy Award-winning Warner/Cartoon Network animated series. The 13-episode season original aired exclusively on Netflix. Go figure, the show gets canceled right when it is at its peak and yet this is easily one of the best collection of episodes. I definitely have been enjoying “Star Wars Rebels” but “The Clone Wars” was getting to a good point in its story that it was getting darker and much deeper. It is sad to think that “The Clone Wars” is over but at least it went out with a good bang.

Official Premise: In these eagerly anticipated episodes of Star Wars: The Clone Wars, some of the deepest mysteries of the conflict between the light and the dark sides of the Force are revealed. An intrepid clone trooper discovers a shocking secret, Anakin Skywalker’s closest relationship is tested to its limits, and what Master Yoda discovers while investigating the disappearance of a Jedi could forever change the balance of power in the galaxy.

This Blu-ray edition delivers these episodes with fantastic 1080p transfers. This show contains never really felt like a TV series, it always felt much larger to me. The colors are crisp and the animation is well done. The DTS-HD Master Audio 5.1 surround track really works with the non-stop epic action in this episodes. I would have loved to see a little bit more in terms of special features included here especially since it is the final season ever of “The Clone Wars”. What we get is a never before seen 16-minute documentary, which covers all six seasons. Seems a little short though to encompass the entire mass of the six seasons. There are also four additional story reels from “The Lost Missions” season, which are only available on this Blu-ray.