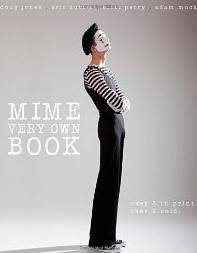 Doug Jones is actor that you know better for his roles beyond makeup than his name. I have been a fan of his work since 1993 in “Hocus Pocus” playing the character Billy. Since then he has appeared in the TV series “Buffy the Vampire Slayer” and films like the “Hellboy” franchise, “Pan’s Labyrinth” and “Fantastic Four: Rise of the Silver Surfer”. Doug Jones has also done work as a mime and it fits really well for this book. This book uses Doug’s talents to the fullest and delivers a very entertaining visual book.

Honestly when I interview Doug earlier this year, read here, we chatted about this book he just make it seem like it was so much fun to do.  It is not your typical photo book but if you are a film and pop culture fan this will definitely spark your interest. The photography in the book is beautifully captured by photographer Eric Curtis and his well known vision.  The photos are produced so well and presented by Medallion Press.  They are so crisp and clear and you can see every little detail in each photo.

Some of the photos featured in this book are featuring artistic and real-world backdrops, for example parodies include “Frank ‘n mime”, “Marilyn Mime-roe”, “Mime-hammad Ali”, “Mime a Llama ding-dong”, and “Mimeageddon”.  There is spoofs on fairy tale favorites called “Once Upon a Mime”, which covers tales like “Little Red Miming Hood” and the “Three Little Pigs”.  Since the book is virtually wordless, it relies on the photo to carry it and it definitely does the job.  I found myself literally laughing at loud as I turned the pages and was left wanting to share the images instantly with others, which is obviously a good sign. Looking for a fun time, be sure to check out this book.