First of all, words cannot express how much I love this book. I show my wife this book and we literally sat and read through each page of this book with our daughter. We ended up dog earring every single page of this book since each of the recipes are absolutely amazing. Whenever you get a cookbook, there are always a bunch of rrecipesthat you say “Ewww, this not for me”. Well I hope you do not read this book hungry because every single one listed here are outstanding (trust me we have already tried almost every one!). The book also has pull out recipes to give to your friends and family.

Official Premise: Treat your taste buds to a feast of traditional holiday delights! With simple step-by-step instructions, helpful cooking tips, color photographs, and charming character art, this book is the perfect way for parents and children to make holiday magic in the kitchen! A rating system lets kids know how difficult the recipes are, and cooking tips are sprinkled throughout.

Firstly, this is a Christmas cookbook, which is a major draw for our family because we simply love the holidays. Throw in our favorite Disney and Pixar characters and it just sweetens the deal. I love that these rrecipesare not difficult either. They are fun and very easy. Plus they are just plain cute like Olaf English Muffin Pizzas. My daughter is obsessed with the Sugar Rush Popcorn Gumdrop Garland from “Wreck it Ralph” and if you love “Frozen”, they have Anna’s Frozen Ice Candy!  I cannot recommend this anymore…and I have already purchased numerous copies as gifts. 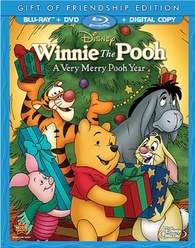 I have always a huge of that silly ole bear and his friends of the 100 acre woods. “Winnie the Pooh: A Very Merry Pooh Year” was a direct to video film released in 2002, which consists of the 1991 Christmas TV special “Winnie the Pooh and Christmas Too” and the (then) new film, “Happy Pooh Year”. Maybe it is me but you can never go wrong with Pooh and his friends. It is always a win/win! This Blu-ray is Tigger-ific and a great way to get ready for the upcoming holiday season! My 17 month old daughter loves these characters as well, so I have a feeling this is going to get quite a lot of play for many years to come!

This “Gift of Friendship Edition” for “Winnie the Pooh: A Very Merry Pooh Year” comes as a combo pack including Blu-ray + DVD + Digital Copy. You have no idea how happy it makes me that that Disney has started backing Ultraviolet digital streaming copies. The 1080p transfer looks good for the direct-to-video animation of “Happy Pooh Year” and the 1991 Christmas TV special “Winnie the Pooh and Christmas Too” looks like it was made yesterday but still with that classic Pooh look and feel.

In terms of special features, first we get one of my favorite new features that Disney has been behind, which is the “Disney Intermission”. When you pause the movie, you and your kids can discover fun family games and activities. It is really a great addition to the film. There is a sing-along option with the film, as well as a song selection. Lastly there is an interactive walk-through of the “Enchanted Environment”. So besides the “Disney Intermission”, nothing really spectacular unlike the recent “Mickey’s Christmas Carol” Blu-ray release. 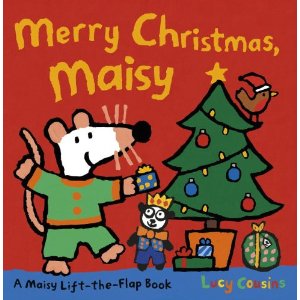 Maisy has become such a well-known icon with children. Her stories and adventures have taught and entertained kids for years. This latest edition is guaranteed to bring a sparkle to the season. This classic Maisy holiday favorite is back by popular demand, with a bright, bold new cover.

“Cuddle up for a little comfort and joy featuring everybody’s favorite mouse. As Maisy get ready for Christmas, little ones can lift flaps and pull tabs to watch her bake and decorate, read her cards, peek at her gifts, and open the door on Christmas morning for a merry surprise. Trimmed in foil and twinkling from beginning to end, Merry Christmas, Maisy captures the joys and simple pleasures of the season.”

Lucy Cousins is the creator of this beloved Maisy series. Hopefully she will continue to release this books for many years to come. I have a feeling that my five month old daughter is going to become a big fan of this series throughout her early years. This lift-the-flap book also succeeds in spreading the joy and traditions of Christmas to the whole family.