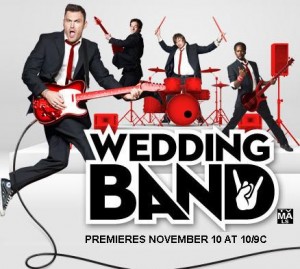 Brian Austin Green and Melora Hardin are starring in TBS’ new comedy series “Wedding Band”, which debuts on Saturday, November 10 at 10:00 pm. “Brian plays Tommy, the life of the party and lead singer of the band who is also the star on the stage and the bedroom. Tommy’s a bad boy with a good heart. And Melora plays Roxie Rutherford who is the owner of Rutherford Events. She’s no- she’ll do nothing more for her clients, she’ll do anything from shipping sand in from Fiji for an island themed party. Roxy is the person behind the most important moments and the best nights in people’s lives.” Brian Austin Green is known best for his roles in “Beverly Hills, 90210” and “Terminator: The Sarah Connor Chronicles”. Melora is known best for her role on NBC’s “The Office”. Media Mikes had a chance to chat with Brian and Melora about this new show and what we can expect.

Mike Gencarelli: Brian, your the lead singer for “Wedding Band”, were these all songs that you knew ahead of time or did you have to learn some of them?
Brian Austin Green: Whew. For the most part I knew the melodies. But most of the songs, I got to be honest, when I got the lyric sheets my first thoughts were, oh, those are the words, (that’s not what) we’ve been singing. When you have REM’s “End of the World as We Know It” and you go what is he talking about? I think the only thing anybody ever knew was “it’s the end of the world as we know it”…and the rest of the words were completely unknown. I’ve always had a bad habit of that, just in I’m a huge music lover. I grew up listening to it, but I’m one of those just because I play, I play piano and drums, I connect way more with melodies usually than the lyrics. So the lyrics are usually the last thing that I learn, whereas a lot of other people I know really sit and study the lyrics first and the melody is kind of the last thing. So, I knew pretty much none of them.

MG: Before I watched the pilot, I was kind of expecting the band to be funny in itself, like the performing, but I was actually impressed and thought you guys were really a solid band. Can you reflect on that important element of the show is that we’re not actually laughing at your guys’ talent because there is talent there?
BAG: Well, I think the answer lends itself to what we were just talking about. We can play comedy songs, which only kind of last for so long, or we can stick with the element of what the show is, which is that our job is to make this believable, our job is to make this band honestly the most kick-ass wedding band anybody has ever seen. I’m just saying that alone there’s comedy in that. They’re a stadium style wedding band. You never hear or see anything like that, let alone sit at a wedding, hear these amazing grand songs, and have pyrotechnics and confetti cannons going off. And throwing guitar picks out to the crowd.
Melora Hardin: Right, and they’ve got my character Rutherford breathing down their neck that it better be damn good. And they are. That’s why she takes them on in the first place. They care so much about the event in a whole other way than Roxie cares about the event, but I’m glad you recognize that because they are awesome. It’s not like we’re breaking into song, you know, like Glee does, like musical style. But it’s just using music in the storyline in a truthful, honest way. So yes, anyway.
BAG: And on top of that, too, Adam Schlesinger who does our music is so gifted at what he does.
MH: Amazing. And Steven Gold.
BAG: Yes, and Steven Gold. They have an amazing ability to take something like a KISS song at Oktoberfest, so you’re singing these party anthems but with a kick drum and a trombone and an accordion, but still doing it in a serious enough way as a musician that aside from laughing because we’re wearing lederhosen and you’re still thinking this song is awesome. I kind of want to hear this version again. It’s really fun. And that’s what music does. The music carries so much emotion to it. And when it’s done by people that really enjoy doing it, I think it comes across just in watching and listening to it. And that’s what we strive for.
BAG: It’s scary when you pick up a script and you see something worded that way. Roxie Rutherford in a jazz club singing Get Ur Freak On. And then all of a sudden you get the CD from Adam and Steve and you hear it. And it was really a nice experience to put in a CD for every episode and hear what they had been working on because it really kept the excitement going.
MH: You just wait, we got so many more coming.
BAG: Oh, I think we have 29 or 30 songs.

MG: What songs should we be looking out for the most this season?
MH: Well, Brian has a lot more to choose from, but I think I mentioned earlier, but I did a version of Get Ur Freak On, which I think they are going to release on iTunes, which is a pretty phenomenal arrangement and pretty spectacular because it’s a Missy Elliot song which they made into a jazz trio. So that was pretty spectacular. But the band has some pretty spectacular ones too.
BAG:  Yes, I honestly don’t want to give any away. I think one that’s really fun and it kind of comes up early on, so I don’t feel so bad, is we do a very sort of Indian version of Party Rock, which is just really amazing  There’s an entire dance number, like Bollywood kind of dance number that goes along with it and it’s pretty genius.

MG: Melora, your character is really tough but also have a fun side; what would you say for you was the most challenging part of preparing for her?
MH: Brian Austin Green [laughs]. No, you know what, she’s so much fun. I mean, she’s – I don’t know if I would say that there was like a challenging part of the character. It’s always exciting, I would put it that way, to try to, you know, to try to kind of get all the different colors running through a character like her because she’s multidimensional and there’s a lot to bite into there. And she’s similar to Jan in that respect in that she’s rich.

MG: There is a little bit of tension between you guys in the first episode and I’m wondering if you think there’s any chance of any romance between Tommy and Rutherford.
BAG:  I think there’s a chance of anything between Tommy and Rutherford.
MH:  I do too.
BAG:  I wouldn’t take anything off the plate. I think anything is possible.
MH: They could kill each other, they could fall in love with each other.
BAG:  They could. Yes.
MH: No, there’s a lot there for sure. It’s an interesting little dynamic.
BAG:  Yes. I think it’s one of the things that makes the relationship fun. It’s kind of like, the Moonlighting aspect of the show. It’s the thing I always loved about that show is you can sort of have that underlying sexual tension, but never even have to go there and it plays really well. And then if we finally do, then it’s explosive and it’s sexy and it’s daring and, you know, we win Oscars. I want to be the first…
MH: We win Oscars even though we’re on TV. We win Oscars. Thank you.
Brian Austin Green: No, I want to be the first television star to win an Oscar.
MH: That’s a first.
BAG: That’s my goal. I want it to be that good and sexy.
MH: Let’s go for it. I like it.

MG: Brian, you starred in hour-long dramas and 30-minute comedies and of course. Melora, you were on “The Office”, which is another 30-minute comedy. The Wedding Band is different. It’s an hour long comedy. How is that different from anything you both have done before?
MH: Well, I’ll start. I think Brian and I both have done sort of sitcom stuff. “The Office” isn’t filmed like a sitcom, but I’ve done that traditional sitcom way of making a comedy. That’s sort of like the crème de la crème is in terms of lifestyle for an actor because, you do all these rehearsal days and then you have one long day. When you’re making a drama, an hour-long drama, you have very long days and but you also have to be funny. So I think to me, what’s nice about the show, and one of the really, really wonderful elements in it being an hour, is that you get the comedy, but you also get that fabulous arc of the dramatic arc. You have time to get into the characters, you have time to get into the storyline, and it doesn’t just have to be (joke, hit, joke, hit, joke, hit, joke, hit). So I really like that a lot and I enjoyed it. But you do have that drama schedule of having to be there for very long days.
BAG: Yes, the thing though that I really enjoy about our show especially is that coming from dramas first. I did do a sitcom and it’s a lot of fun and I really enjoy comedy. I’ve always loved watching even growing up, was I love comedy that are real, their real dramatic, you know, honest moments in funny situations. I like seeing people struggle through situations that are just absurd and laughing at them. I feel like our show is written in a very serious way. We’re honest about the things that we do and our lives are just crazy enough that it’s entertaining and it’s funny. But it’s never setup, punch line, which is hard to do.
MH: Yes, and it’s a whole different style of comedy.
BAG: It’s a hard thing to do for an hour especially.
MH: Yes. Exactly. No, it’s all based on truth.
BAG: And you guys were the best at it on The Office. That was like the absolute bar of delivering.
MH: Well, it was unique in that it really was the first one to kind of come along that was really, since like Cheers, that was sort of like really based in reality and sort of that mockumentary style. That really worked well for me, too. Brian and I have had similar backgrounds in that we both really believe that great comedy, just as great drama, definitely comes from the truth of the moment and it’s always funny, truth is always funnier than fiction and trying to get to that truth is always going to make the best joke.

MG: Tell us about how to was working with your wife, Megan Fox, on this show? How did that come about?
BAG: Honestly, she kind of stepped in and saved us at the last minute. There were a couple other people that they were discussing bringing into the episode at first and schedule wise and timing wise it didn’t work out and I had already spoken to my wife about the episode and kind of what was going on and she graciously said that, you know, if nothing else worked out that she would step in and kind of rescue us and she did. I thought she was great. I thought she kicked ass.
MH: Yes, she totally kicked ass.