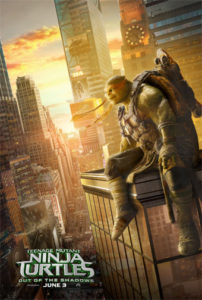 Let’s be honest. In fact. Let’s be blunt. “Teenage Mutant Ninja Turtles: Out of the Shadows” is garbage. Many expected it to be garbage. I don’t know why you would even expect me to say otherwise when you came here to read this review. So. With that out of the way. The latest “TMNT” is the “Batman V. Superman” of turtle movies. It’s devoid of any plot, meaning, or logic. But just like DC’s misstep, it’s a somewhat entertaining waste of time.

The pizza eating, 90’s slang slinging; ninja turtles are attempting the latest comic book movie trend, overstuffed spectacles. Donatello (Ploszek), Leonardo (Howard), Michelangelo (Fisher) and Raphael (Ritchson) have to save the world in this movie. Without any interesting new villains, the movie falls back on Shredder (Brian Tee). After escaping a bumbling NYPD police force, Shredder is working with a super scientist, played by Tyler Perry (yes, that Tyler Perry), and an intergalactic alien named Krang.

Yep. You read that right. After Shredder escapes from jail, he goes through a time portal and talks with a giant talking snaggletooth brain attached to a robot. Shredder isn’t scared or concerned about traversing dimensions to talk with a slobbering, drooling alien. Instead they chat really quickly about exposition and Shredder goes back to Earth like nothing happened. Sandwiched between the two supervillains are Rocksteady (Stephen Farrelly) and Bebop (Gary Anthony Williams). Has no one in Hollywood learned from “Spiderman 3”?

There’s way too much happening in “Out of the Shadows” for anything to truly make sense. The rest of this review could be all the nagging questions I have. Generally kid’s movies aren’t supposed to have a lot of loose ends and confusing narrative when the target audience needs a little bit more clarification about what exactly is happening. But the CGI spectacle steps in where the script is missing, providing mouth silencing eye candy for the kids. So if you’re in need of a two hour daycare, this might be your best bet.

It’s kind of shocking that the kid’s network, Nickelodeon, would be willing to slap their name on this. There’s not any graphic violence, but “TMNT: Out of the Shadows” still tries really hard to earn its PG-13 rating. Outside of some four letter words, there’s the gratuitous sexualization of “reporter”, April O’Neil (Megan Fox), and the even more gratuitous flirtation of O’Neil by nearly every guy she encounters, including one of the turtles. Of course I don’t have kids and don’t have to worry about what they watch. It just irks me a little that the one female in this movie, who’s a journalist, is never doing her job and is ogled at by someone of a different species.

So what’s actually good about this? Besides being insulting to viewer’s intelligence, it’s amusing. The overused line, “Just turn your brain off,” comes in handy this time. But there are moments that are so disparaging and stupid that you’ll probably just want to leave the brain outside or at home, less it wakes up in a blind rage. This movie does benefit greatly from the viewer ignoring rationale and accepting that its pure popcorn nonsense. The strongest attribute is the turtles, which is ironic that the CGI characters are more human than the wooden actors.

Outside of a few cheesy lines, they’re lovable goofs who want to fit in and be heroes. It’s kind of like watching an Oscar winning actor starring in a bad horror movie, you know they can do better, but you’re still rooting for them because they haven’t sunk to the level of everything and everyone around them. They capture a certain essence about sibling arguments, growing up, and learning to recognize the differences and acceptance of one another.

I’m very conflicted on recommending this movie. I would say your children have to be a certain age and maturity level, but I’d also like to say that if you’re expecting deep storytelling like the Marvel Universe, you apparently don’t know who Michael Bay is. The producer has added all his hallmarks to nearly every aspect. It’d be nice if Bay could be pushed into the shadows so someone with a love for the “TMNT” franchise can make it as good as I keep thinking it can be.