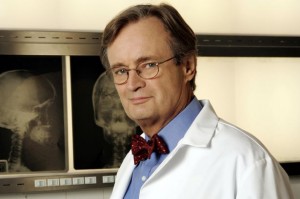 Today actor David McCallum is probably best known for his role as Donald “Ducky” Mallard on the long running television series “NCIS.”  If you’re my age you probably remember him best as the smooth secret agent Illya Kuryakin from “The Man from U.N.C.L.E.”  As someone who had, in the 3rd grade, been scolded often by teachers for continually saying “Open Channel D” into his ink pen, it was a great day when I had the chance to speak with Mr. McCallum about the 50th Anniversary of one of the most popular movies of the 1960s, “The Great Escape.”

To help celebrate this event, Mr. McCallum will be appearing at a benefit screening of the film this coming weekend, November 9, in Omaha, Nebraska as part of Bruce Crawford’s on-going classic film salute.  For information on the event head over to http://www.omahafilmevent.com/upcoming.htm

Recently Mr. McCallum took some time to talk to me about “The Great Escape,” why he enjoys voicing video-games and another upcoming 50th Anniversary he looks forward to celebrating.

MS:  How did you get involved with “The Great Escape?”
DM:  Way back then I had an agent in England by the name of Derrick Marr.  I hadn’t been with him long.  I had been doing an awful lot of television…live television, and working in the theater.  He called me and said that I’d gotten a request to meet with the casting director of the film.

MS:  At the time it was probably the biggest film production you’d been involved with.  As a young actor what were your thoughts when you realized you would be working with such international stars as Steve McQueen and James Garner?  Was it overwhelming?
DM:  Well, thankfully, life has never been able to overwhelm me.  I tend to enjoy and take great pleasure in all of the work that I do.  And back then it was no different.  When you’ve decided that your whole life is going to be as an actor, when you get opportunities to do a wonderful thing, like “The Great Escape,” it’s just a colossal pleasure that you look forward to with great anticipation.  And then you start preparing, of course.  You have to learn all about the character…all of the things necessary.  It’s not about just turning up and saying the words.  And the whole thing was such a beautiful experience.  I knew Donald Pleasence.  We had been very good friends for some time.  And you can imagine how it was for the young actors.  Being able to work with all of those people.  I’m not usually star-struck.  I’m fascinated by the number of people I’ve met working in this profession over the years.  That film was a great beginning.

MS:  Both of your parents were very well known and classically trained musicians (his father, David Sr, was the first violinist for the London Philharmonic – his mother, Dorothy, was a cellist).  Were you ever encouraged to make music your profession?
DM:  My father was a professional musician, my mother, who was a cellist, gave it up early to take care of my father.  I played the Oboe from about the age of eight or nine.  I went to the Royal Academy of Music for a short while but then I gave the whole thing up to go on the stage.

MS:  You’ve done a lot of voice work in video games.  Does that take a different kind of preparation as an actor?
DM:  The best thing about that kind of media is that you get to over-act outrageously.  To me that’s the greatest pleasure.

MS:  “NCIS” isn’t your first hit television show.  What, in your opinion, is the biggest difference in working in television between “The Man from U.N.C.L.E.” and now?
DM:  I think the ability to record sound and the size of the camera and the fact that it’s now digital and not film.  Other than that nothing’s changed.

MS:  Final question, and I understand if you can’t answer it:  next year marks the 50th Anniversary of “The Man from U.N.C.L.E.”  Do you have any involvement in the upcoming “U.N.C.L.E.” film?
DM:  No, right now I have nothing to do with that.  It’s a whole new venture.  But now that you tell me it’s the 50th Anniversary next year I’ll have to set aside a nice bottle of wine and open it.  Maybe I’ll save it until the movie comes out.

I hope by the time you read this you will have contacted both Mr. McCallum and Robert Vaughn and found a place for them in your film.  Both men are in great health and acting today.  I don’t care if you have them walk past Henry Cavill and Armie Hammer in the hallway, you must recognize them.  It is their chemistry that made “The Man from U.N.C.L.E.”  the show it was.  As Leo G. Carroll has passed away more than 40 years ago I will not lobby for his appearance!