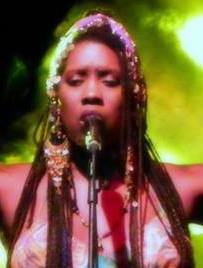 Singer/songwriter Durga McBroom-Hudson has worked with the band Pink Floyd as a backing vocalist consistently on almost all of their shows since the 1987 “A Momentary Lapse of Reason” Tour up to the final concert of “The Division Bell” in 1994. In 1989, she formed the band Blue Pearl and had several hit songs including “Naked in the Rain”. Recently, she came back together with Pink Floyd to record on their supposed last album “The Endless River”. Media Mikes had a chance to chat with Durga about her work with the band and her plans for the future.

Mike Gencarelli: Tell us how you ended up perform backing vocals for Pink Floyd?
Durga McBroom-Hudson: My sister was recording an album on Capitol Records in New York with Nile Rogers, and I was doing backing vocals for her. Meanwhile, Pink Floyd had started the Momentary Lapse Of Reason Tour with only 2 singers. The man who ran the production company shooting the initial concert videos recommended my sister, and she recommended me. They needed someone to sing bottom, so they asked me to join the tour.

MG: You toured with the band for their album “A Momentary Lapse of Reason” and “The Division Bell” tours; what was your most memorable experience?
DMH: Probably Pink Floyd Live In Venice.

MG: After your first tour with the band for “A Momentary Lapse of Reason”, what was it actually getting to go in and record in the studio for “The Division Bell”?
DMH: It was wonderful. Bob Ezrin had wanted all English singers, so they recorded the whole thing that way. But David thought the low parts weren’t right, so they flew me over from Los Angeles and I re-recorded all of those parts. He really likes the tone of my voice. It’s a huge honor to know one of your biggest teachers appreciates you.

MG: What is your favorite Pink Floyd to sing and why?
DMH: I don’t have only one. That is like asking which of your children is your favorite. Most people would assume “Great Gig In The Sky”, but I have a love/hate relationship with singing it because it’s so difficult.

MG: What is a fun fact about David Gilmour that a lot of people might not know?
DMH: I personally believe he’s a bit shy, despite the fact that he has quite an imposing presence. I am very fond of him.

MG: How did you get approached to come back for Pink Floyd’s last album “The Endless River”?
DMH: Youth, who is my partner in my own band Blue Pearl is a co-producer on “The Endless River”. He asked me, and we surprised David with what I came up with. Luckily, David loved it.

MG: Did you work exclusively on “Louder than Words”?
DMH: No. I am also singing on “Talkin’ Hawkin'” and “Surfacing”. David asked me to come in to add to what I had already done on “Louder Than Words”.

MG: What was it like working with David Gilmour again after a 20 year break?
DMH: He is the best, and he makes me do my best. I love working with him. It was like coming home.

MG: Was it challenging coming back to work on the music that Richard Wright created without him there?
DMH: He was there. I could feel him.

MG: Tell us about your involvement with the animated film “Strange Frame”?
DMH: I sang on the soundtrack, including a cover of “The Gunner’s Dream” from “The Final Cut” with Roger Water’s approval.

MG: What else do you have planned for the rest of the year and next year?
DMH: I expect to get more mixes in from Youth from the new Blue Pearl album, and next year I expect to see it released, as well as doing A LOT of shows. The rest of this year will mostly be spent with family. The new Culture Club album will be released in January, and hopefully George will have recovered enough from his throat injury to go back on tour – I hope to do some shows with them too. I already have at least 15 dates lined up from Brazil to Finland, some with my sister Lorelei. Keep your eyes open – chances are I’ll be in a city near you!