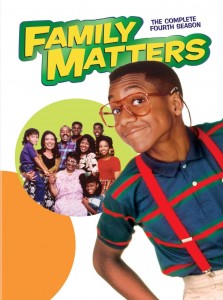 I remember every Friday night, my whole family would make such a big deal for “TGIF” on ABC, which included “Family Matters”, “Step By Step”, “Full House” and others like “Dinosaurs”. This was a time when families used to spend time together and watch them as a family. I always look back on shows like “Family Matters” with such fond memories. I am happy to see that this still still has a life on DVD and the kids that grew up with this show can now share it with their own families.

Official Premise: Family Matters: The Complete Fourth Season includes all 24 episodes filled with lots of laughter! Life lessons and laughs go hand in hand with the Winslow family and their ever-present neighbor Steve Urkel. So whether it’s hilarity on Halloween, a comical crisis on Christmas, a veritable “va-va-voom!” on Valentine’s Day or a memorable moment on a Monday, every day can be a good day with Family Matters.

Here are some pivotal moments of the fourth season: Michelle Thomas guest stars as Myra, Steve’s girlfriend. Carl and Steve compete on “American Gladiators” in hopes of settling a dispute. I actually remember where I was the first time I watched this episode. It is so funny how certain past events stick with you. Other craziness included when Urkel literally glues himself to Laura’s side. These are only a few of the great episodes included in this season. In fact season three was when this show really found its legs and this season was riding on those legs and delivered some of the best episodes.

“Family Matters: The Complete Third Season” was released in February 2013 and here we are in February 2014 with the release of “The Complete Fourth Season”. I wish that Warner Bros. would pick up the pace with this series and stop making fans wait a year before seasons. It is not like they are still airing this show. With nine seasons in total, at this pace fans will have to wait until 2019 before they can have the complete series on DVD, not to mention Blu-ray, which is the most current format. Please do not make us wait that long.