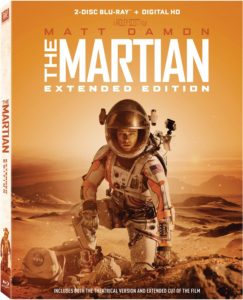 When it comes to double dipping on their home video releases, Fox is the king! “The Martian” is the latest film to get a second life on Blu-ray with this Extended Edition release. This all-new extended cut features over 10 minutes of footage not shown in theaters. The film itself before this extension was already an amazing film! The new footage doesn’t really change the film in any way besides giving some new details about our characters. The real selling point of this new Blu-ray is that there is more than two hours of new behind-the-scenes content and the fact that it includes the original Theatrical cut as well. If you didn’t purchase this film originally when it was released, now is definitely the time to pick this up.

Official Premise: Nominated for 7 Academy Awards, including Best Picture and Best Actor (Matt Damon), The Martian is a breathtaking sci-fi adventure directed by Ridley Scott (Alien, Prometheus) and based on the #1 New York Times best-selling novel. When an American astronaut (Damon) is left behind during a mission to Mars, he must find a way to survive on the barren planet until a team of scientists can devise a rescue plan to bring him home!

The audio/video presentation of this film on Blu-ray is stunning. I could only imagine it would be topped by the 4K presentation on Blu-ray. The DTS-HD Master Audio 7.1 really blew me away with the space scenes and overall sound delivery. The new special features include an audio commentary by renowned director Ridley Scott, writer/executive producer Drew Goddard and author of the novel Andy Weir. There are two mighty in-depth features looking into the science of the film. The first is “The Long Way Home: Making The Martian”, which runs nearly 80 minutes and the second is “The Journey to Mars 101” which runs over 2 hours, which is jam packed with information.

There are two NASA based featurettes including “Dare Mighty Things: NASA’s Journey to Mars” and
the shorter “Ridley Scott Discusses NASA’s Journey to Mars”. Lastly there are still a few deleted scenes left on the second disc as well as some theatrical trailers. That concludes the new content but also included is all the bonus features included in the original The Martian Blu-ray release as well, so set aside a good amount of time to get through all this wonderful content! 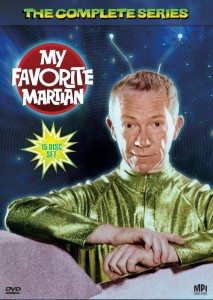 Sad to admit but my first exposure to “My Favorite Martian” was the 1996 feature film starring Christopher Lloyd and Jeff Daniels. After watching that I became aware of the much better original 1960s supernatural sitcom series. For the first time ever MPI is releasing the complete series of this show in a collector’s set and packed it full with hours of rare extras. This DVD set features all 107 complete, unedited, digitally remastered episodes from the show’s three seasons. If you are a fan of this series, this is an amazing collection and very reasonable priced as well (Running around $60.00 on Amazon).

Official Premise: Originally airing on CBS-TV from 1963 to 1966 (and debuting in the top 10 in its premiere season), MY FAVORITE MARTIAN marked the beginning of television’s fascination with fantasy-themed comedy series. It stars Bill Bixby (The Courtship Of Eddie’s Father, The Incredible Hulk) as newspaper reporter Tim O’Hara and Ray Walston (South Pacific, Fast Times at Ridgemont High) as the perfectly human-looking Martian whom Tim discovers and passes off as his Uncle Martin. Pamela Britton (TV’s Blondie) plays their snoopy landlady, Lorelei Brown.

Now on to the extras! There are some great special features included here. “Ray Walston on I’ve Got a Secret” features the actor on the game show sponsored by Dream Whip! There is a Ray Walston TV Commercial with him pitching aluminum. There is a collection of promo pics from the series as well as comic strip from dozens of pages from the funny pages. “The Reluctant Eye” is failed pilot starring Bobby Van, which was included since it was made by “Martian” producer Jack Chertok. “The Man in the Square Suit” is another sitcom episode starring Paul Dooley (The Electric Company & Breaking Away) in the lead.

“Soundtrack Music Album” includes dozens of track from the show’s score. Some of my favorites are watching the “Original Sponsors Spots” including ads for Rice Krispies, Corn Flakes, Paper Mate Pens and Toni, the home perm! There are some Vintage Cast Interviews with Ray Waltson. “Behind the Scenes Home Movies” features the cast having fun at the Desilu Studios. There are some cool “Spaceship Miniature Test Footage” as well as an “Animation & Effects Reel”. Lastly “Let’s Talk to Lucy” is a vintage radio show with interviews from Bill Bixby and Ray Walston.