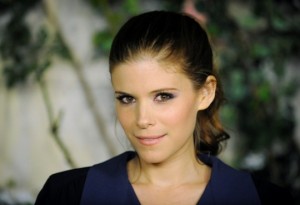 Kate Mara has appeared in several television series and films. Most recently she plays the role of Hayden McClane in the FX series “American Horror Story”. Media Mikes had a chance to talk with Kate about her work on the series and her role in the upcoming film “Kin”.

Adam Lawton: Can you tell us about your character Hayden?
Kate Mara: Hayden is the student that Ben had an affair with. She is the reason Ben and his family move from Boston out to Los Angeles. Ben goes back to Boston after finding out Hayden is pregnant and they plan to have Hayden get an abortion. After Ben leaves Hayden goes out to Los Angeles to tell Ben that she didn’t have an abortion like they had planned. While Hayden is at the house she ends up getting killed. Hayden is a very vengeful ghost and is taking it upon herself to haunt Vivian and cause other problems in the house.

AL: What was it that drew you to the script?
KM: I had worked with Ryan Murphy and Brad Falchuk on “Nip Tuck”. I think I was 19 at the time and that was one of my first jobs after moving out to Los Angeles. I have known Ryan ever since. One day he called and asked if I would be interested in doing a couple episodes of this and Brad’s new show. My agent sent me the script and I really didn’t know what to expect. I am not normally a fan of the horror genre but I love Ryan’s work and I was pleasantly surprised after reading the script. Ryan then gave me an over view of what my character would be doing but, he really didn’t tell me what all was going to happen. I was just under the impression that I was going to be on a few episodes to cause some mischief. I didn’t know I was going to die and end up haunting the house. I was lucky to know a little bit about the role prior to shooting. Generally we only have the first act of a script and we have no clue what else we will be doing. The writers on the show are really great and I trust Ryan and Brad. Normally this type of situation would make me very anxious. This is really exciting!

AL: What do you think has been your favorite part of working on the show?
KM: I have done so many different things with my character emotionally. She starts out as being a little on the innocent side and appears to be somewhat taken advantage of. Hayden then turns into a very unpredictable and emotional type character. When we see Hayden as a ghost you can tell there is a lot of evil there but with some vulnerability. To be able to portray all those things is definitely a challenge but it is so much fun. Typically it’s hard to find roles like this even in movies. It’s so out there with some of the things we get to say. It’s a really great role to be able to play with on such a great show.

AL: how does working on “American Horror Story” compare to other television shows you have worked on?
KM: Each show tends to have a little different feel from one another. “American Horror Story” tends to shoot more like a movie. It is just as much work if not more. We cram so much screen time into one week that it can be pretty intense. I don’t generally like to do a lot of television because it can be unpredictable and you don’t have a lot of control over what’s going to happen with your character.  I generally only ever do arcs or reoccurring roles because then I know I am only going to be on for 5 or so episodes. You can kind of get a sense of what’s going to happen then. I love films because you get to see the script and have some control over your character. With television you really don’t get that. Being this show is done by Ryan and Brad I didn’t have to really worry. I was excited about the script especially after seeing the first episode. It’s really about who is in control of where the story lines are going.

AL: Do you have a favorite episode from this season?
KM: I have to say that I am obsessed with Jessica Lange’s character. Her role is just so well written. Jessica’s entire acting career has been brilliant. The more of her character we can see the more I like the episode. It’s hard to choose just one episode but the more Jessica the better. (Laughs)

AL:Have you been told anything about being a part of Season 2?
KM: I don’t know yet. I don’t think anyone really knows what’s going on. I like to think that if you’re a ghost there is always a possibility of coming back.

AL: What can you tell us about your upcoming film “Kin”?
KM: I wish I knew more of what was going on with that film. I think there was mention of taking it to some festivals but we will have to see. The film was directed by Stefan Ruzowitzky who won an Oscar a few years back for his film “The Counterfeiters”. Eric Bana, Olivia Wilde and Charlie Hunnam had already been cast so I was excited to be a part of the film. The character was also something that I hadn’t done before. I play a cop in a small town. The film centers around Eric Bana and Olivia Wilde who play siblings that have just robbed a casino. There was a lot of action involved and we got to do a lot of ski-do riding. We also went to a shooting range which I was terrified of at first. It’s always fun to do new and different stuff.

AL: Do you have any other upcoming projects you can tell us about?
KM: I am finishing up “American Horror Story” as we speak. I have an idea of what I am going to be doing next however I can’t really say anything about that just yet. I do know that I will probably start working on that in January.