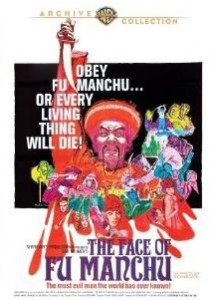 I am a huge fan of Christopher Lee and his role of Fu Manchu is one of the classics. Of course it doesn’t compare to Dracula but he is one bad-ass villain.  I remember seeing this film as a kid and not knowing what the hell is going on…well not much has changed to be honest. This does make me want to check out Sax Rohmer’s novels though for sure. The film is still a little weird and confusing but I have learned to appreciated it more for what it is. If you are a fan of this series, than this is a must-have.

Warner Archive is yet again behind this release, which is the first time this film has been put out on DVD. This title has not been remastered or restored but has been made from the best-quality video master currently available.  It looks good but has some spots with issues,  It is shows in it original aspect ratio 2.40:1 and presented in 16X9 full frame. The audio track included is the typical Dolby Mono track. If you want more, “Vengeance Of Fu Manchu”, also starring Christopher Lee, was released on September 25th. Warner Archive needs to keep these film coming.

Synopsis: The world can breathe easier. Fu Manchu, the crimelord who knows the hidden powers of the mind, is dead. No less than Scotland Yard’s Nayland Smith witnessed the execution. But beware. Don’t expect Fu Manchu to die so conveniently when there’s still so much evil to perpetrate. Christopher Lee plays the malevolent anti hero of the popular Sax Rohmer novels for the first time in The Face of Fu Manchu. World domination is the ingenious fiend’s goal, one increasingly within his long-nailed grasp now that he’s discovered a secret potion so toxic that one drop can kill thousands. Pay heed, you Nayland Smiths of the world: The forces of evil are very much alive! Are you so foolish as to believe you can oppose the will of Fu Manchu?