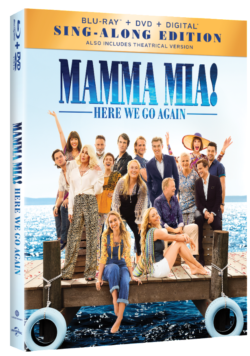 To celebrate the Blu-ray release of “Mamma Mia: Here We Go Again“, Media Mikes would like to give two of our fans a chance to win a Blu-ray + DVD combo pack of the film. If you want to win this great prize, please leave a comment below your favorite ABBA song. This giveaway will remain open until October 19th at Noon, Eastern Time. This is open to our readers in US only. One entry per person, per household. All other entries will be considered invalid. Media Mikes will randomly select winners. Winners will be alerted via email.

Bring family and friends together and have the time of your life with MAMMA MIA! HERE WE GO AGAIN Sing-Along Edition, the all-new smash-hit romantic comedy based on the songs of ABBA, for a one-of-a-kind at home experience. MAMMA MIA! HERE WE GO AGAIN arrives on Digital and the digital movie app MOVIES ANYWHERE on October 9, 2018, as well as on 4K Ultra HD, Blu-rayTM, DVD and On Demand on October 23, 2018 from Universal Pictures Home Entertainment. Ten years after MAMMA MIA! The Movie, MAMMA MIA! HERE WE GO AGAIN invites you to return to the magical Greek island of Kalokairi to continue the story’s emotional journey of family and friendship whilst discovering just how those life-changing relationships were formed and includes hit songs such as When I Kissed The Teacher, Fernando and Dancing Queen. 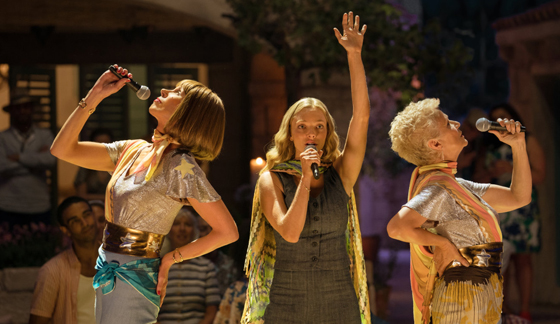 Earlier this year I heard word that “Mamma Mia! Here We Go Again” was coming out and I thought to myself that it was a sequel that really no one asked for nor did it seem necessary…but the trailer was a lot of fun, so I was excited. The cast is all back along with some new great faces (more on that below). I really just enjoyed this movie a lot. It had tons of laughs followed up by some really solid drama (bring the tissues). I loved the balance of the two. Listen, I am not a huge ABBA fan but those songs seems to win me over and performed by these amazingly talented people makes it hard not to enjoy! I have a feeling that I will be seeing this film again soon in the theaters again perhaps if they have a Sing-a-long version (if you are reading this Universal) 😉

Let’s just talk about the cast, this film brought back EVERYONE! Amanda Seyfried looks better than ever, WOW, and her voice was on point. Christine Baranski and Julie Walters were amazing together again. I just love their characters. Pierce Brosnan was sweet in the film and really gave some heart. It’s looks like he was trying really hard, so I am throwing him a bone here. Colin Firth and Stellan Skarsgård were very funny again and added a lot of heart. Cher still has it let me tell you and she looks fantastic! Meryl Streep delivers a very emotional song and I really enjoyed her being back as she was. Some new faces Lily James and Andy Garcia were fantastic as well. Andy Garcia steals the show for me personally. Lily James though was simply perfect as a younger Donna. Her voice is extraordinary and she really nailed that carefree spirit and made you want to be like her (except for the three random hook-ups). I loved her in “Cinderella” and she is even more amazing in this!

Like I mentioned at first I thought this would be unnecessary, put I feel like the sequel does have some extra life in it that I didn’t expect. It takes place tn years after the first “Mamma Mia!” (which grossed more than $600 million around the world). In the film, we return to the Greek island of Kalokairi, where Sophie (Amanda Seyfried) running planning a grand re-opening of Donna’s (Meryl Streep) villa, who had past away a year prior. She finds herself thinking about her relationships and her future. With the arrival of friends and family to support they guide her through the opening event. Plenty of surprises along the way including an appear from Sophie’s grandmother played perfectly by Cher. The story intertwins with a flashback of Donna when she is young and how Sophie was led to be born, which also connects with Sophie today.

Let’s not forget the music now. “Mamma Mia” wouldn’t be “Mamma Mia” without the songs of ABBA. There is a decently balanced combo of new songs mixed with a few songs redone from the first film. At first, I really wasn’t too keen on hearing the same songs again but they were really well done, specifically “I Have A Dream” by Lily James. When you think about “Mamma Mia” though, I would want to hear “Dancing Queen” and songs like that, so this movie does not disappoint at all. This is a fun movie that has a really good heart and even though a little cheesy but you leave the theater smiling (and a little teary).