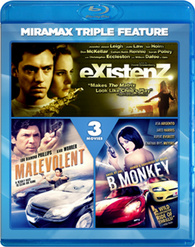 Honestly this triple feature Blu-ray is worth it just alone for the purchase of Cronenberg’s gem “eXistenZ”. This film has never been released on Blu-ray before and this is the first time it has been available. I saw this film in theaters back in 1999 and it instantly becoming a favorite of mine.  If you are wondering why I gave this film 4 out of 5 stars, that is since the film says it is full 1080p but only registers 1080i and only comes with a Dolby Digital 2.0 track.  Now I am not even really complaining but the film does sound and look great on Blu-ray.

Now let’s get to the other films on this release.  I really do not see how “eXistenZ” fits in since it is not really an action movie, per say.  I love me some Lou Diamond Phillips but “Malevolent” just screams B-movie action and really doesn’t rise about that.  It does come with a 5.1 DTS audio track though, which was impressive and best on the entire disc.  “B. Monkey” stars the beautiful Asia Argento, who I can watch in honestly anything.  I saw this film many years ago and it has held up overtime.  It is still nothing to knock your sock off with but it is decent action and she kicks ass, as usual.

“eXistenz” directed by David Cronenberg, stars Jennifer Jason Leigh & Jude Law. It also has appearances from Ian Holm and Willem Dafoe. Leigh plays game designer Allegra Geller, who is responsible for the new groundbreaking virutal game system called “eXistenZ”. While on the run with Ted Pikul (Jude Law) to avoid being assassinated, they take the game for a test drive and become immersed in a dangerous alternate reality.

“Malevolent” stars both Lou Diamond Phillips and Kari Wuhrer. Jack (Phillips) is a cop who is trying to clear his name. After passing out in a bar bathroom and wakes up being framed for murder that he didn’t committ. It is up to him to clear his name and find the person responsible. Oh and Kari Wurher plays stripper (big stretch).

Echo Bridge is known for releasing Miramax’s films on Blu-ray, some in combo packs like this one and some solo.  This is obviously not the best Blu-ray that I own but I was just happy enough to see “eXistenZ” get a semi-HD treatment.  I also have to note that each film has zero special features.  There is virtually no room anyway since all three films are crammed on to one Blu-ray 50GB disc.  I hope that Echo Bridge is planning a solo release for “eXistenZ” in the near future and hoping they tack on some extras and fix the audio and video issues.  But for now I recommend snagging this release to add to your collection.