I have known Stevan Mena for over 15 years, dating back to his first film “Malevolence”. I had a feeling then that this guy was going to be a director to watch out for. Fast forward to today Stevan has finally been completed his planned “Malevolence” trilogy , which also included the second film, “Bereavement”, which starred Michael Biehn (“Aliens”, “Terminator”) and gave Alexandra Daddario (“Baywatch”, “Texas Chainsaw 3D”) her first big break. “Malevolence 3: Killer” has not had an easy road to getting made, including the tragic death of a major cast member which caused a big road bump. With all that being said, I was a little nervous what to expect with the third film…but holy cow was I wrong. “Malevolence 3: Killer” is easily the best in the trilogy.

I don’t think Stevan Mena has received the full credit that he deserves for these films. You can tell that he wears a lot of hats on these productions. They have no budget yet show a much higher production value. I feel like he really gets the horror genre and knows how to setup a shot for a great scare. The scares in “Malevolence 3: Killer” are so effective. Honestly, I feel like a lot of horror films these days don’t get the scares right. I always feel like they are actually afraid to make you scared and these movies waste these opportunities. Mena doesn’t disappoint and has the timing down perfectly. I would have loved to seen “Malevolence 3: Killer” in a theater. Credit should also go to the film’s fantastic score as well for helping achieve that incredible suspense.

This trilogy takes it all back to the beginning following Martin Bristol, the boy who was kidnapped 10 years ago (in the first film), but he is not the same boy anymore. After being tortured and abused by his captor, Graham Sutter (in the second film), Martin is out on a rampage now and is not able to be stopped. Special Agent William Perkins and his team try and hunt down Martin as he heads back to his hometown to brings down a wave of terror down on it. Looking back on these three films, I do feel that this one ties it all together so well. I almost even feel like you can get by with watching this one and not having seen the previous films.

Like I mentioned above with, Alexandra Daddario in “Bereavement”, Stevan Mena really has an eye for talent. This film’s lead actress Katie Gibson is a another fine example. She is a very talented actress and I see her going places! Scott Decker, who died during production, played Agent Roland and was great as well. I am sure it wasn’t an easy task to complete this film with losing one of the leads but it came together well. Horror icon, Adrienne Barbeau, shows up for a little bit as well and her cameos is a great treat for us hardcore horror fans!

Now that this trilogy is completed, I would like to see what Stevan Mena has planned next. Given that “Malevolence 3: Killer” hasn’t had an easy road to release, i really feel like it ended up being a very effective horror film with some great scares, gory kills and solid acting. Horror fans need to see this film for sure! It is our job has fans to get the word out on this film and get people to see it because I don’t think that they are going to be disappointed. 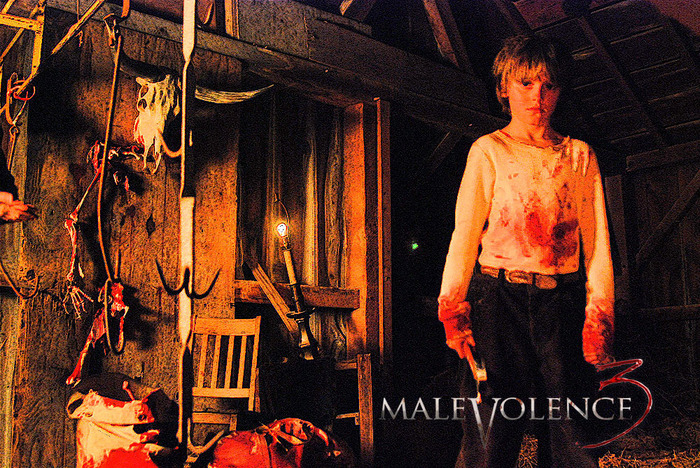 In 2005, Stevan Mena’s debut feature film Malevolence was a surprise hit when it was released theatrically and on DVD. Written, co-produced and directed by Stevan, Malevolence told the shocking but enthralling story of masked serial killer Martin Bristol, whose story hit a nerve with horror fans and mainstream audiences all over the world. Intended as the second act of a sprawling trilogy, fans were rewarded in 2011 when Stevan explored the origins of Martin’s tragic creation with Bereavement starring Michael Biehn and Alexandra Daddario. Now, the final suspenseful chapter is about to be told with Malevolence 3…but we need your help.

Mena Films announces their campaign to start production of Malevolence 3. Once again, Stevan Mena is writing, directing and producing, along with longtime co-producer Tim Bristol and producer/actor Brian O’Halloran (Clerks). Fans can contribute funds towards commencing principal photography – even pre-ordering the Blu-ray™/DVD! In addition, fans who commit targeted minimum pledge amounts will be eligible for exclusive incentives including signed scripts, tickets to the premiere party, a Skype session with the cast and filmmakers – and a chance to appear in the film! To contribute, go to http://www.indiegogo.com/projects/malevolence -3/x/2886817.

In Malevolence 3, Martin Bristol returns to where it all began: the home where he was kidnapped from. But he is not the boy who disappeared over 10 years ago. Tortured and abused at the hands of his psychotic captor, Graham Sutter, Martin is damaged beyond repair. Lurking in the shadows of suburbia, he stalks and kills without remorse, picking his victims at random – or are they? Special Agent William Perkins follows Martin’s trail of terror, desperate to capture him before he kills again. Martin’s family, mourning his disappearance for over 10 years, is informed not only that he is alive, but that he is responsible for the wave of murder sweeping through their town. Will they be able to reunite with their long lost son before it’s too late, or will Perkins have to use excessive force to bring him down?

For more information about Malevolence 3, check out www.malevolence3.com