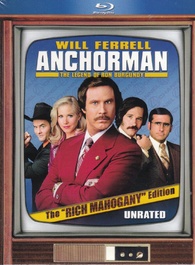 “Anchorman: The Legend of Ron Burgundy” is with no question one of the best comedies of all-time. The film wasn’t that huge in theaters but became a cult classic very quickly when it hit DVD. I do not think that there is one day that goes by that I do not quote this film, numerous times in fact. It is also one of those films that you can watch over and over and it does not get old in fact it only gets better. The “Rich Mahogany” Edition features three versions of the film: the theatrical version, an unrated version and Wake Up, Ron Burgundy: The Lost Movie, all presented here on Blu-ray in glorious high definition. This Blu-ray was originally released as a Best Buy Exclusive back in 2010 but is FINALLY getting an expanded release to take advantage of the long-awaited sequel’s release this Christmas in theaters. This is a must for any fan of this film and yes it is worth the double dip.

Official Premise: Will Ferrel (Old School, Elf) is Ron Burgundy, a top-rated 1970’s San Diego anchorman who believes women have a place in the newsroom – as long as they stick to covering fashion shows or late-breaking cooking stories. So when ron is told he’ll be working with a bright young newswoman (Christina Applegate) who’s beautiful, ambitious and smart enough to be more than eye candy, it’s not just a clash of two TV people with really great hair – it’s war! Filled with wicked wit and slapstick humor, Anchorman is the year’s most wildly irreverent, must-see comedy hit!

Paramount has given this Blu-ray release a lot of love. I just wish they would have updated this release from it being a Best Buy Exclusive and included an Ultraviolet Digital Copy with this updated release. We get both the 94-minute theatrical cut and the longer 97 minute extended cut of the film on the first disc. Besides the various cuts of the film, there is also Ron’s personal 32-page diary – “The Many Months of Burgundy” included as well as a very cool set of 12 Trading Cards, really a must for any fan of the film. In terms of presentation, the 1080p transfer is quite impressive within its 1.78:1-framed transfer, or at least as far as comedies go. Same goes for the DTS-HD Master Audio 5.1 track, which is a typical of a comedy high definition track but works very well.

So let’s get to some of the special features now, this “Rich Mahogany Edition” two-disc Blu-ray release of “Anchorman: The Legend of Ron Burgundy” has no shortage of goodies. The first disc consists of an audio commentary track with Director/Writer Adam McKay; Actor/Writer Will Ferrell; Musicians Lou Rawls and Kyle Gass; Entertainer Andy Richter; and Actors Paul Rudd, David Koechner, and Christina Applegate. These commentary tracks really add tons of great replay value to this film. Disc one also includes a collection of 36 deleted and extended scenes,which run just short of an hour. There is also a blooper reel, the “Afternoon Delight” music video and Ron Burgundy’s ESPN SportsCenter Audition.

Disc two kicks off with one hell of a special feature which would be the full-length film “Wake Up, Ron Burgundy”. It is a full-length film that was pieced together from various cut scenes and various subplots that didn’t make the final cut of “Anchorman”. There is also a brief “Intro-Commentary” for Wake Up, Ron Burgundy, which runs just under 13 minutes with Will Ferrell and Aaron Zimmerman. Honestly worth the purchase of the release alone just for this film in high definition.  Also included there are five Ron Burgundy Public Service Announcements, Ron Burgundy’s 1970 Emmy Awards speech. “Raw Footage ‘Good Takes'” includes nearly 40 minutes of more alternate takes and improvisations. Next up is “Afternoon Delight” Recording Session, “Happy Birthday AMC Loews” covering Loews’ 100th birthday. There are various interviews from the 2004 MTV Music Awards with Rebecca Romijn, Jim Caviezel, and Burt Reynolds. There are also three short featurettes including “Cinemax: The Making of ‘Anchorman'”, “Comedy Central Reel Comedy: ‘Anchorman'” and “A Conversation With Ron Burgundy”.

You think we are done yet? Well we still have more! There are cast auditions for Christina Applegate, David Koechner, Paul Rudd, Steve Carell, Fred Armisen, Maya Rudolph, Kevin Corrigan, and Justin Long. There is a Table Read from 6/2/03 and more rehearsal footage included. “Playback Video” is a collection of the news team’s more embarrassing moments. Same goes for “Commercial Break”, which is more funny moments from the “Anchorman” set. Lastly we get the film’s teaser trailer, theatrical trailer and “Trounced Spiderman” TV Spot. So obviously, this release is a must-have for any “Anchorman” fan since it really delivers to its fans!