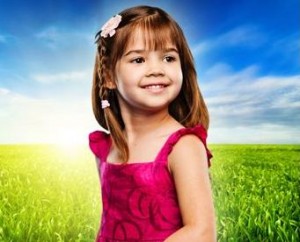 Kaitlyn Maher is only 8-years old but she has already accomplished so much. She started at the young age of 4 on TV’s “America’s Got Talent”. She has worked with Disney on “Santa Buddies”, “The Search for Santa Paws”, “Treasure Buddies” and most recently “Santa Paws 2: The Santa Pups”. She has a beautiful voice and gets to sing some really nice songs in her latest film. Media Mikes had a chance to chat with Kaitlyn about her films and spreading the Christmas spirit.

Mike Gencarelli: This is your fourth role in the Disney Buddies series, how did you originally get involved?
Kaitlyn Maher: Lorna Johnson, the casting director, saw me on “America’s Got Talent” when I was 4-years old. From there she cast me for role of Tiny in “Santa Buddies”. Then they liked me and the director, Robert Vince cast me in “The Search for Santa Paws” and so on…

MG: What did you enjoy most about working on “Santa Paws 2: The Santa Pups”?
KM: Everybody was really, really nice. I liked working with the director, Mr. Robert Vince. Cheryl Ladd is very sweet, wonderful and so very nice. I really enjoyed working with her. Also we shot the film in mountains of British Columbia and we were surrounded by mountains and snow.  It was just really pretty.

MG: After three Christmas themed film, is it safe to say that it is your favorite holiday?
KM: I love Christmas. It probably is my favorite holiday. I love to share the joy and spirit of Christmas with everyone, especially with those people that are having a rough time. I want to tell them that they are meant to be happy and to keep believing. God loves them and I love them too.

MG: Tell us about the songs in “Santa Paws 2: The Santa Pups”?
KM: They are very inspiring songs. I love all of the songs. They are songs that you can spread the Christmas spirit with everybody. It also makes the movie really fun. It also makes me smile that other people will be able to enjoy these songs as well and it will get into the Christmas spirit. The songs also promote the true meaning of Christmas for everyone.

MG: What do you enjoy most about music?
KM: I just love making people smile and making others feel happy and loved. I also like to make them know that God loves them even if they don’t feel like it.

MG: What do you most about doing voice work in the film “Santa Buddies” and “Treasure Buddies”?
KM: It is a lot of fun going in the studios and recording. It is nice to imagine what it would be like to voice a camel and a puppy in real life. Though I don’t think I look anything like a camel [laughs].

MG: What do you have planned next? How about a new album?
KM: I have a TV show that is coming out in the Spring called “The Goodwin Games” on Fox. Yes, I will also be doing a new CD next year. I am really excited about that. I really want to give people a lot of encouragement and I want make a really inspiring CD.