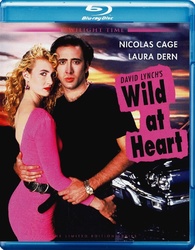 Here is the thing about David Lynch you either really love David Lynch or you hate him. Luckily for this reviewer, he has always been one of my favorites. 1990 was an interesting time for the director, he came off the disappointing (yet now cult classic) “Dune” and the controversial “Blue Velvet”. So this wasn’t very well received but is still such a fun and crazy movie that holds up today. Just look at the cast, which speaks for itself including Nicolas Cage, Laura Dern, Willem Dafoe, Diane Ladd, Isabella Rossellini, Harry Dean Stanton. Cage is in rare form in the film and Ladd got nominated for an Oscar for her role. If you dig Lynch, Twilight Time delivered a very solid release here.

Official Premise: Adapted from the picaresque novel by Barry Gifford, writer-director David Lynch’s Wild at Heart (1990) is a scarifying road movie starring Nicolas Cage and Laura Dern as Sailor and Lula, a pair of star-crossed lovers pursued across the American landscape by all manner of horrors. Most are unleashed by Lula’s unhinged mother (played by Diane Ladd, Dern’s real-life Mom), a woman scorned who will stop at nothing to destroy Sailor.

This Blu-ray release is an Screen Archives Entertainment Exclusive and is a Limited Edition release with only 3000 copies produced. “Wild at Heart” looks quite awesome with its 1080p transfer in 2.35:1. Lynch is known for his vivid colors through his films and it is well represented here and quite intense. There is some noticeable grainy at some points, specifically in the dark scenes but it still looks great. The DTS-HD Master Audio 5.1 is a major spotlight for this releases as well, specifically with the haunting score by Angelo Badalamenti, which was always a favorite mine. In fact, there is an isolated score and effects track as well included and is presented in DTS-HD Master Audio 2.0.

In terms of special features here, there is nothing new but the extras from the past DVD releases have been ported over. “Love, Death, Elvis and Oz: The Making of Wild at Heart” is a nice in-depth look behind-the-scenes with some great interviews. There is a short but still cool vintage “Original 1990 Making Of EPK”. Dell’s Lunch Counter  includes over 20 minutes of great extended Interviews. “Specific Spontaneity: Focus on David Lynch” is a look at the director. Not sure why “David Lynch on the DVD” is included ?? since this is after all a a Blu-ray. Lastly there are some TV Spots, a motion gallery and some trailers.