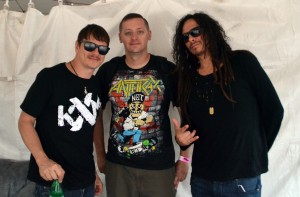 The heavy metal group Korn is out on the road this summer as part of the Rockstar Energy Drink Mayhem Festival. The group recently released a tour version of their 2013 album “The Paradigm Shift” exclusively through Best Buy which features several new tracks along with some exclusive live tracks as well. Media Mikes had the pleasure of talking with drummer Ray Luzier and guitarist James “Munky” Shaffer during the tours recent stop in Scranton, PA about the release and how they connect with the different crowds they perform for each night.

Adam Lawton: When you are out on a tour like the Mayhem Festival is there any one thing that is the same from day to day?
Ray Luzier: We hear the same bands every day. (Laughs) What’s really great is that we get to play to diverse crowds every show. There are people who have seen us 27 times and there are people who are just seeing us that day for the first time. I’m not sure about constants but I try to stay in a similar routine from day to day.

AL: With the band playing all over the world how do you go about connecting with each of the crowds you perform for?
James “Munky” Shaffer: Every audience is different and that’s really the beauty of it. Like Ray said before you get people who have seen you a lot and you get people who have never seen you before. We are playing the same songs night after night so we try and keep that thought in our heads so we go out and put on a great show every night. We want them to really enjoy the show and to come and see us again.
RL: We may be super tired from traveling or whatever before we hit the stage but once we are up there we are energized bythe crowd. We are fans of music ourselves and still go out and see a lot of bands and buy their merchandise and what not. This is Korn’s 20th year as a band and I have been touring myself just as long. It never gets old. We are still excited to play every time we go up there.

AL: Have you guys seen any bands on this tour that you have really become fans of?
JS: Trivium is a band that has really impressed me. Their songs and how they engage the audience has really impressed me. Those guys are super tight professionally which is really inspiring. I know they have been around a few years but to see that level of commitment is really awesome. I was a mess at that stage of the game. (Laughs) I still am a mess but I have gotten a little better over time.
RL: I go out and check out the side stages from time to time and there are a lot of bands on this tour that have really impressed me. I watch bands like Mushroomhead and Miss May I and you can see just how hungry they are. They all have their own thing going for them which is really great to see.

AL: Can you give us some info on the tour version of your most recent album “The Paradigm Shift”?
JS: We initially released that album last year and after it was out for a couple months there were some songs that never got finished that we wanted to still work on. Jonathan went back in and wrote lyrics for these songs that we didn’t get to finish because we just ran out of time. They came out pretty good and we also decided to add some live tracks on the new release as well. When we are out on the road we like to have something in stores for people to buy that is fresh.

AL: Ray, how do you go about balancing your time in Korn and working with your newest project KXM?
RL: We all have side projects that we work on when we aren’t working on Korn. We just have a tremendous amount of music inside of us. I think these side projects are important for each of us to do as they help us remain creative. KXM is something that George, Doug and I have been talking about doing for years. The idea goes all the way back to my son’s first birthday party when we all were talking about jamming together. Scheduling is always the hard part as Korn is very busy but we hope to get some shows set up before the end of the year. Right now we are just working on videos and such.